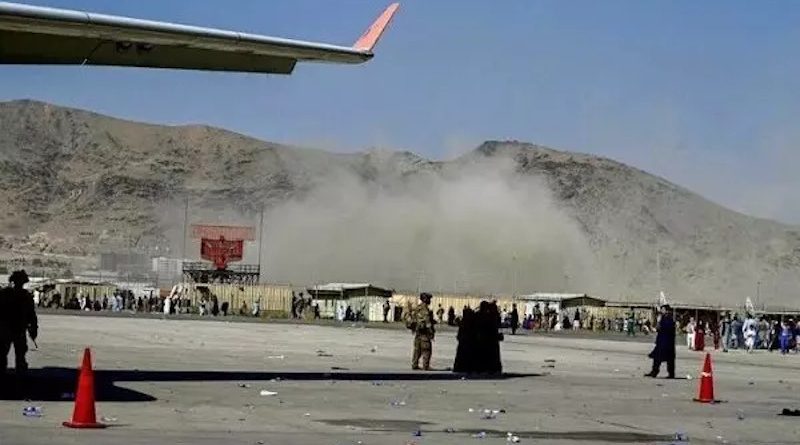 A single suicide bomber, not two as previously believed, carried out the attack that killed more than 100 people, including U.S. service members, outside Kabul’s airport on Thursday, the U.S. Defense Department said Friday.

“It’s not any surprise that the confusion of very dynamic events like this can cause information sometimes to be misreported or garbled,” U.S. Army General Hank Taylor told reporters at a Pentagon media briefing.

Pentagon spokesman John Kirby said at the briefing the U.S. believes there are other “specific, credible” threats against the airport, noting that “we certainly are prepared and would expect future attempts.”

Despite the risks, crowds of people desperate to leave Afghanistan gathered outside Kabul’s airport early Friday as evacuation flights resumed, less than a day after the deadly bombing.

The Wall Street Journal reported that the crowds dispersed later Friday amid rumors that another terror attack was imminent. A VOA reporter who visited the area late Friday morning saw mostly empty streets with Taliban security blocking access to streets near the airport.

The Islamic State group claimed responsibility for the attacks in a report on its news agency’s Telegram channel, hours after suicide bombers struck two locations along the perimeter of the Hamid Karzai International Airport, near the Abbey Gate and outside a nearby hotel. A gun battle occurred after the bombings, said U.S. General Frank McKenzie, head of U.S. Central Command, during a Pentagon news briefing.

A regional offshoot of Islamic State known as ISIS-Khorasan Province, or ISIS-K, has been blamed for the attacks.

U.S. President Joe Biden is vowing vengeance on those responsible.

“To those who carried out this attack, as well as anyone who wishes America harm, know this: We will not forgive,” Biden said in a nationally broadcast address. “We will hunt you down and make you pay.”

Biden said he had ordered commanders to develop operational plans to strike ISIS-K assets, leadership and facilities, saying, “We will respond with force and precision at our time, at the place we choose and the moment of our choosing.”

When asked if the U.S. is capable of simultaneously planning and executing counter attacks while leading the evacuation, General Taylor said, “We have resources with the Centcom commander, with the commanders on the ground and the capabilities to allow us execute any type of those operations as those are required to do.”

At least 90 Afghans died in the attack, according to the Afghan news agency Pajhwok.  Including the 13 American service members, more than 100 people were killed.

The New York Times and other U.S. media outlets, citing health officials in Afghanistan, reported Friday that up to 170 people, excluding U.S. troops, were killed.

Eighteen injured American military personnel were being evacuated from Afghanistan on specially equipped C-17s with surgical units, according to Captain Bill Urban, a spokesman for the U.S. Central Command.

About 105,000 people have left Afghanistan on evacuation flights since August 14, the day before the Taliban entered Kabul, and a total of about 110,600 people since the end of July, a White House official said Friday. Since Thursday, 12,500 have been evacuated from Kabul, the official said.

General Taylor said that more than 300 Americans had been evacuated since Thursday, increasing the total to about 5,100 since the evacuations began. He said the U.S. State Department continues to process evacuations, despite the risks.

“Some gates have been closed … but American citizens, SIV (Special Immigrant Visa) applicants and vulnerable Afghans who have the designated and proper credentials will continue to be processed for departure from the airfield.”

Meanwhile, spokesman John Kirby said Friday the Pentagon has authorized three military installations in the U.S. to join four other U.S. military bases in providing “support to the U.S. mission to evacuate Afghan Special Immigrant Visa applicants, their families and other at-risk individuals.”

Biden vowed Thursday the evacuations would continue until the August 31 deadline to withdraw all troops.

“We will get Americans out who want to get out,” the president said.