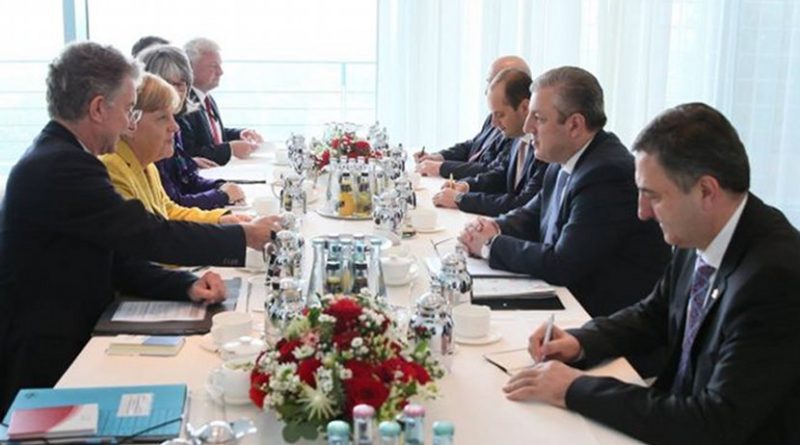 At the outset of the meeting, Kvirikashvili congratulated the German Chancellor’s team on its victory in the recent federal elections and emphasized the immense importance of this victory to Europe.

During the meeting, special attention was paid to the dynamics in Georgia-Germany political and economic cooperation. Kvirikashvili informed Merkel of the country’s ongoing reforms and economic situation. It was pointed out that Georgia offers an investment-friendly environment, as evidenced by rankings from different international institutions.

According to Kvirikashvili, Georgia’s completed and ongoing reforms, EU Association Agreement, Free Trade Agreement and visa waiver, coupled with stable and democratic political environment, puts in place all necessary conditions for the German business community take greater interest in doing business in Georgia, which will bring more tangible results to both countries.

The Georgian Prime Minister spoke of the importance of closer political and economic ties with the EU. According to Kvirikashvili, the development of communications and infrastructural links is important not only to Georgia but to the region as a whole, also to the Eastern Partnership and the European Union.

During the meeting, Russia-Georgia conflict was discussed and the situation in Georgia’s occupied territories and along the occupation line. Special emphasis was placed on Georgia’s steps toward peaceful conflict resolution and active reconciliation policy, and the important role of the EU in this direction was also singled out.

, who is on his one-day working visit to Germany,

According to PM’s press office, Kvirikashvili told the Chancellor that this electoral win was “very important for Europe.”

The two sides discussed bilateral political and economic cooperation, with the Georgian Prime Minister telling his counterpart that the reforms completed and still ongoing in Georgia, along with the association agreement and the free trade agreement with the European Union, as well as the visa liberalization for the Georgian citizens, would facilitate the German business activities in Georgia, which, in the words of Kvirikashvili, would be beneficial for both countries.

The conflict between Georgia and Russia, and the situation in the occupied regions of Georgia, as well as on the occupation line, were also discussed, while the EU’s important role in the peace process was underlined. The two leaders touched upon global security issues as well, highlighting Georgia’s participation in the Afghanistan mission.