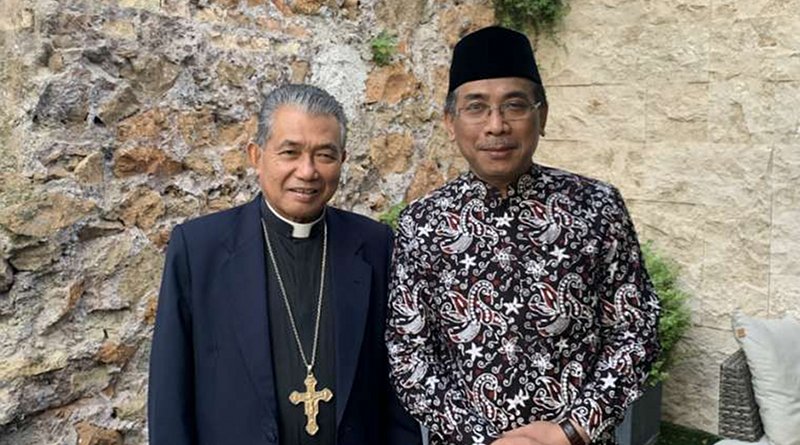 The leader of the largest independent Muslim organization in the world met Pope Francis this week to present his vision for a more peaceful future and greater human fraternity.

Sheikh Yahya Cholil Staquf leads the 50 million member Nahdlatul Ulama movement, which calls for a reformed “humanitarian Islam” and has developed a theological framework for Islam that rejects the concepts of caliphate, Sharia law, and “kafir” (infidels).

The Indonesian Sunni leader told CNA that he was “thrilled and excited” when Pope Francis and the Grand Imam of al-Azhar Ahmed el-Tayeb signed in February the Abu Dhabi declaration on “Human Fraternity for World Peace and Living Together,” because it expresses the vision of  “compassionate Islam” his organization has advocated for for decades.

The sheikh has specific recommendations for concrete steps to achieve the pope’s aspirations of peace and human fraternity. He came to Rome to share them with the pope.

Just weeks after the Abu Dhabi declaration, Nahdlatul Ulama hosted a conference in Indonesia with over 20,000 Muslim scholars in attendance. At this conference, Muslim clerics and scholars issued an “ijtihad” stating their theological reasoning for prohibting the term “kafir” meaning “infidel” to describe one’s fellow citizens.

“We cannot just pretend that there are no problems in Islamic views. There are problems there. You need to acknowledge that so that we can work for the solution. If you do not acknowledge the problem, you cannot resolve it,” Staquf told CNA.

“In Muslim-majority societies, you can see more attitudes of discrimination and persecution toward minorities … so the Islamic world needs to develop the whole religious system that will integrate the Islamic world harmoniously with the rest of the world,” he said.

Central to these proposed changes to Islamic theology is how Muslims are called to interact with non-Muslims, Staquf explained.

“We need for Muslims to view others as a fellow human being, fellow brothers in humanity. We should not attack on the basis of different identities,” he said.

Staquf met Pope Francis after the general audience on Sept. 25. He presented the pope with a letter and several documents from Nahdlatul Ulama, containing recommendations as to how Muslims scholars have sought to address “problematic elements within Islamic orthodoxy” to create a more harmonious world order with “respect for equal rights and dignity of every human being.”

Within the documents presented to the pope, NU lays out “a practical road map” to achieve the aspirations expressed in pope’s Document on Human Fraternity: “prohibiting use of the term kafir (infidel) to describe one’s fellow citizens; affirming the legitimacy of the nation state and laws created through modern political processes; committing Muslims to strive for peace as a religious obligation; and providing a detailed framework for bringing Islamic orthodoxy into alignment with 21st century norms.”

“My hope is that these documents will be examined seriously by the Vatican so that the Vatican can make decisions to engage with us and work together with this,” Staquf said.

The Muslim leader also brought a delegation of Indonesian Catholics and young Muslims practicing “humanitarian Islam” with him to Rome to attend the general audience with the pope. Together they asked Pope Francis to visit Indonesia to continue his interreligious dialogue.

Indonesia is a Muslim-majority country historically known for its ethnic diversity and peaceful religious pluralism, which has seen an increase in religious-based violence and radical groups in recent years.

“They explained to the pope that we stand for the harmony of Indonesia, so that when we [Nahdlatul Ulama Muslims] see threats toward our fellow Indonesian Christians, we protect them,” Staquf said.

“I mentioned to His Holiness that we believe Humanitarian Islam is in alignment with noble values of Christian humanism … It was received very well,” he said.

Archbishop Agustinus Agus of Pontianak, who accompanied Staquf on the trip, facilitated the Sunni sheikh’s meetings with the pope and members of the Pontifical Council for Interreligious Dialogue.

Archbishop Agus told CNA that when Sheikh Staquf expressed that he wanted to come to the Vatican to give the pope Nahdlatul Ulama’s response to the Abu Dhabi declaration, he knew it was “the right time … for one of the great leaders of the Muslims to meet the pope.”

“I feel that I have a responsibility for the future of Indonesia,” Agus said.

Staquf stressed that the persecution of Christians in Muslim-majority countries around the world must end. He said that when looking at the rise of the Islamic State and other radical groups, one cannot ignore the theological underpinnings that allow their radicalism and violence to spread.

“Let’s look at why these problematic views can spread effectively everywhere in the Islamic world in these Muslims communities because it is supported by … what is considered to be authoritative elements of the orthodoxy. So we need to change that so that people cannot use that elements to make troubles, to make problems,” he said.

“We have a network of hundreds of thousands of clerics and Muslim scholars in Indonesia. So we all know what is in the teachings of Islam,” he said. “We know that there are some elements that do not encourage harmony and even can be potential obstacles to harmony.”

One of the areas Nahdlatul Ulama is working to reform is religious education for Muslim youth. They are constructing a curriculum for teaching Islamic history that places less of an emphasis on the violence of the past, and more on spirituality.

“We use a creed for this movement, the global movement of humanitarian Islam. Our creed is: ‘We choose rahma’ … ‘We choose compassion,” he said.