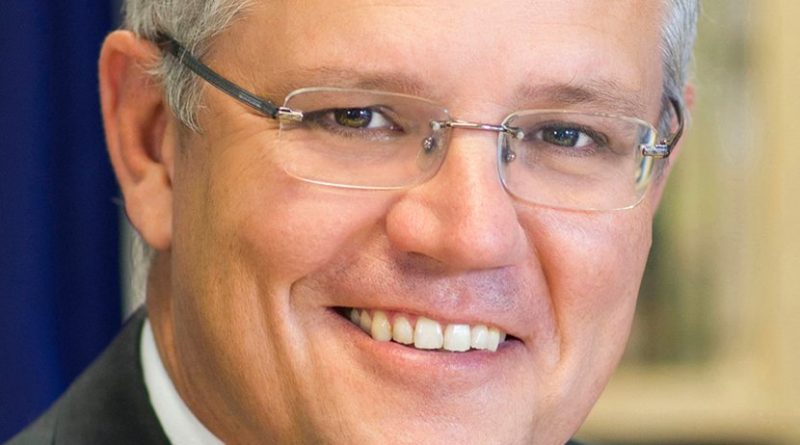 China has rattled Western observers for centuries, and the idea that it might be approaching a level of formidable heft is troubling to those who, condescendingly, see it as a naughty child who aspired to economic growth but could only do so as long as it behaved. In other words, they achieved success because we let them, and profited from our generosity. (The “we” here constitutes a good number of rapacious powers that stripped the country bare in the nineteenth century.)

This school-yard thesis, with all the intelligence to recommend it, is something that has been promoted from Washington to Canberra; and it was being readily mouthed again by Australia’s Prime Minister Scott Morrison in the United States. Away from prying eyes in the Australian parliament, away from the “Canberra bubble”, as he terms it with tediousness, Morrison could play his small part in a big show. Having taken of the root of US President Donald Trump, he was suggesting that China is – and here, some magic is suggested – “a newly developed country”.

“The world’s global institutions must adjust their settings for China, in recognition of this new status,” claimed Morrison in his speech to the Chicago Council on Global Affairs. “Having achieved this status, it is important that China’s trade arrangements [and] participation in addressing important global environmental challenges, with transparency in their partnerships and support for developing nations, reflect this new status and responsibilities that go with it as a world power.”

To suggest something so utterly irresponsible in terms of evidence and empirical presumption is much in keeping with the Morrison mode. He remains Australia’s Pentecostal advertising man, a bit edgy, if not over edge, on matters of truth, inclined to abbreviation rather than detail. But being in the United States, he managed to do what Australian prime ministers have done before: bend over in an odious display of unquestioning reverence, indifferent to the actual interests of his distant country.

The view is also clumsy in its timing. With the United States and China engaged in a bruising trade war, a cool, and distancing head, might have helped. Australia can only weather such matters for a time, and with China being its main purchaser of fossil fuel plunder, keeping in Beijing’s good books, if only on some tepid level, would not go amiss. But Morrison wishes to have a bit both ways. “The United States is our great ally, China is our comprehensive strategic partner.”

As for Trump, for whom Morrison seemed all too willing to mimic, trade is a simple slanted thing. According to the US President, “The future does not belong to globalists; the future belongs to patriots.” Given Australia’s obsession with the free trade model, one it has pursued with priestly zeal since the 1990s, such a view does not so much sit oddly as fall off altogether. Australia, in fact, has been distinctly unpatriotic in its policies, opening markets and abolishing tariffs in ideological fashion. It has stripped its own industries and allowed others to wither. Such unquestioning willingness has led to the creation of its own strand of populist agrarian socialism, exemplified by the Katter’s Australian Party and, in part, Pauline Hanson’s One Nation.

There is another point to Morrison’s China thesis that falls flat. In treating China as a developed country, the expectation follows that Beijing will have to abide by World Trade Organisation rules with greater diligence. This would also include more stringent emission reduction targets.

Given that the United States has been more than happy to breach WTO guidelines on tariffs at points, citing national security, and ignore environmental protocols, including the Paris Agreement, this is truly risible. But what verges on the comically obscene is the sense that Morrison can divorce his government’s own ambivalence to anthropogenic causes of climate change, with his famed love of coal, with a suggestion that the PRC do more on the very subject that he essentially repudiates. Underlying this is an absurd rationale: do more on cutting emissions, but please do buy our coal.

The talking-heads circuit have their own views on China’s development, with patchy degrees of nuance. Jeremy Wallace of Cornell University, for instance, suggests that China is both developed and developing (the problem with econobabble is its stubborn defiance of logic: there is, technically, never a developed country to begin with: the process is ongoing). “Yet, because China is such a huge country it is still the case that there are huge number of rich people in China.” A bit like the United States, then. David M. Lampton of Johns Hopkins is similarly inclined, though pegs China back in development terms because it “has no well-accepted, describable, constitutionally grounded succession process.”

The Chinese response to Morrison was tip-toeing but firm. You do not have to be a full throated propagandist to appreciate that the Prime Minister’s view, as the embassy statement from Beijing’s embassy in Canberra observed, was “basically an echo of what the US has claimed.”

Mindful of not wishing to downplay its own developments and advances, the statement conceded that “China, through its own efforts, has made remarkable achievements in economic and social development over the past decades and become the world’s second largest economy.” (To not accept this would strike the wrong note for domestic audiences.) But there was “still a big gap between China and the developed countries in terms of development level. China still has a long way to go to achieve full modernisation.”

In matters of gross domestic product, this could certainly count as an argument. With less than $10,000 per capita, the PRC comes in at 70th in the world stakes. In terms of amount, it was the equivalent of 15.6 percent of the US, 17 percent that of Australia. In a remark that seemed self-flagellating and stinging, the embassy admitted that Beijing still faced “the challenge of unbalanced development and underdevelopment.”

The aping of US positions by satraps is a disease that has no obvious cure short of full, bold independence from Washington’s clutching power. But as has been shown with conviction, Australia’s commitment to the United States remains unquestionable and more than a touch sad. At least Tony Blair and his Britain were accused by their harshest critics of being substantive partners of a twisted relationship with George W. Bush: Blair sporting the fishnets or perhaps being a subservient poodle. For Australian Prime Ministers, holding the drinks at an international reception in the US is sufficient to simply assume the views of the hosts. After all, the hosts can’t be wrong, can they?