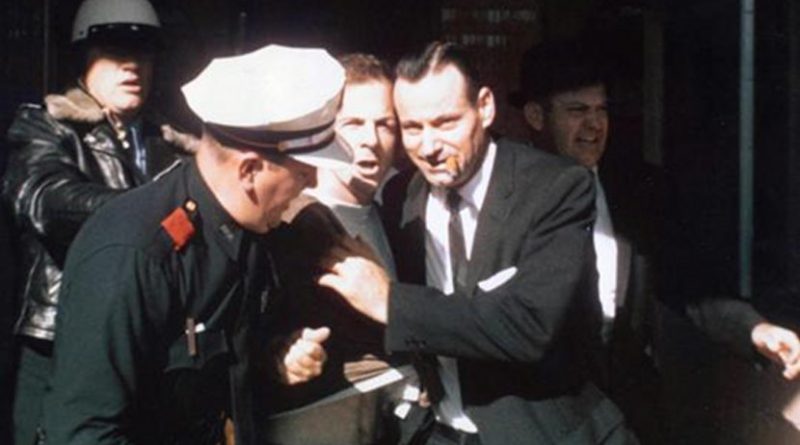 (RFE/RL) — The U.S. government’s release of a trove of previously classified documents related to the 1963 assassination of President John F. Kennedy has brought renewed attention to contacts between his shooter, Lee Harvey Oswald, and Soviet intelligence officers in Mexico two months before the killing.

One of those officers, Valery Kostikov, was identified by the CIA a day after Kennedy’s assassination as a KGB officer in an operation allegedly being run by the Soviet spy agency’s 13th Department “responsible for sabotage and assassination.”

Oswald’s contacts with Kostikov were previously known and have long stoked speculation that the KGB may have had a hand in the assassination. But their interactions at the Soviet Embassy in Mexico City nonetheless grabbed headlines in both Russian and Western media following the October 26 release of nearly 3,000 records on Kennedy’s killing.

But the links between Kostikov, who was serving as vice consul at the embassy as Oswald tried in vain to get a Soviet visa there in September 1963, and the KGB’s “assassination” department appear to be far from definitively established, according previously classified documents now available to the public.

As the U.S. website MuckRock noted this week, in a now declassified memo to the CIA’s director in September 1964, FBI head J. Edgar Hoover said his agency’s files “do not contain any information to fully support” the CIA’s assessment that Kostikov worked for the KGB’s 13th Department.

Hoover’s memo also cited a letter the FBI received from the CIA’s counterintelligence chief five months before Kennedy’s killing stating that the CIA “could locate no information in your files to indicate Kostikov was a representative” of the KGB’s assassinations department.

Hoover suggested that the CIA amend its record to excise “the affirmative expression of belief in Kostikov’s employment” in that department. He advised changing the reference to Kostikov to say that he “may be associated” with that department but that “no specific information is at hand to definitely support that possibility.”

The CIA said in early 1964 that Oswald’s contact with Kostikov and other KGB officers stationed under diplomatic cover in Mexico City “was nothing more than a grim coincidence.”

Who Was Valery Vladimirovich Kostikov?

There is scant Russian-language information about Kostikov online, but now-declassified CIA documents include a brief biography.

They say he was born in Moscow in 1933 and studied either at a foreign-languages or a foreign-affairs institute in the Soviet capital. A fluent Spanish speaker, he served as an interpreter at international exhibitions in Spain and traveled to Mexico and Cuba in the years before he was assigned to the embassy in Mexico City, according to the CIA.

Kostikov’s appearance matched the description an “FBI-controlled double agent” gave of a Soviet intelligence officer he met in Mexico, the CIA memo says. That agent’s Soviet handler in the United States was Oleg Brykin of the KGB’s 13th Department, according to the CIA background memo.

The declassified document — dated November 23, 1963 — states that according to an intercepted phone call in Mexico City, Oswald was at the Soviet Embassy on September 28, 1963.

Oswald, who had returned to the United States with his Soviet wife after living 2 1/2 years in Minsk beginning in 1959, was by all accounts desperately seeking a Soviet visa to return.

The CIA document states that Oswald called the Soviet Embassy on October 1, 1963, “identifying himself by name and speaking broken Russian, stating” that he’d spoken to Kostikov “and asking the guard who answered the phone whether there was ‘anything new concerning the telegram to Washington.'”

Kostikov himself was quoted about his interactions with Oswald in a book by a fellow KGB officer, Oleg Nechiporenko, about the Kennedy assassination.

In an updated Russian-language version of that book, Nechiporenko quoted Kostikov as saying that he and his colleagues were preparing for a volleyball game when Oswald showed up at the embassy on September 28, 1963.

He said he arrived at the compound to find Oswald sitting there with his colleague, Pavel Yatskov, to whom Kostikov explained that the American had been there the previous day.

Kostikov said Oswald “was very riled up and broke into hysterics at the mention of the FBI, crying and saying as he wept: ‘I’m afraid they’ll kill me. Let me in.'”

He said Oswald pulled out a handgun, saying that he carried it for protection, and put it on the table in front of them, Nechiporenko quoted Kostikov as saying. Yatskov took the bullets out of the gun and put it in a drawer, he said.

They gave Oswald a glass of water, Kostikov said, after which he looked at his watch. “It was already 11 a.m., and we were late for the volleyball game,” he was quoted as saying.

Two days before the latest batch of documents related to Kennedy’s assassination were released, a U.S. businessman named Brian Litman posted on Twitter what he said was a photograph of Kostikov.

Litman’s LinkedIn profile states that he was involved in the media industry in Russia in the early 1990s, and that he had represented several former KGB officers — including Kostikov. A newspaper report and press release from 1992 appear to corroborate this assertion.

In a short biography he posted of Kostikov on October 26, Litman states that Kostikov was a captain in the KGB’s 13th Department, which was responsible for assassinations, calling the Soviet officer a “trained ‘neutralizer.'” He says, however, that Kostikov’s encounters with Oswald were “solely in the course of his diplomatic duties.”

Litman wrote that he had been at Kostikov’s home several times, saying the KGB officer lived in Moscow’s southeastern Kuzminki district. He said that Kostikov retired from the KGB in January 1992 and died eight years later, in October 2000.

These assertions could not be independently verified.

Litman told RFE/RL in an e-mail on October 27 that he was informed of Kostikov’s death by the KGB officer’s widow “when I called her maybe 10 years ago.” He added that Kostikov was “100 percent attached” to the KGB’s 13th Department.

More light could be shed on Kostikov in a 167-page CIA file that has yet to be released.

U.S. President Donald Trump has delayed the release of some of the still-classified files related to Kennedy’s killing, citing national-security concerns that the CIA and the FBI have raised.

Peter Savodnik, the author of The Interloper: Lee Harvey Oswald Inside The Soviet Union, told RFE/RL that “it’s almost certain there is nothing in the new JFK assassination docs that undermines the Warren Commission’s conclusion — that Oswald was the lone gunman.”

“Just as important: There’s nothing in there, or anywhere else, that will convince people who want to believe the government lied that the government did not, in fact, lie,” Savodnik added. “The conspiracy theorists and their many adherents want to believe we’re being duped. That is central to their identity.”

With reporting by Ron Synovitz