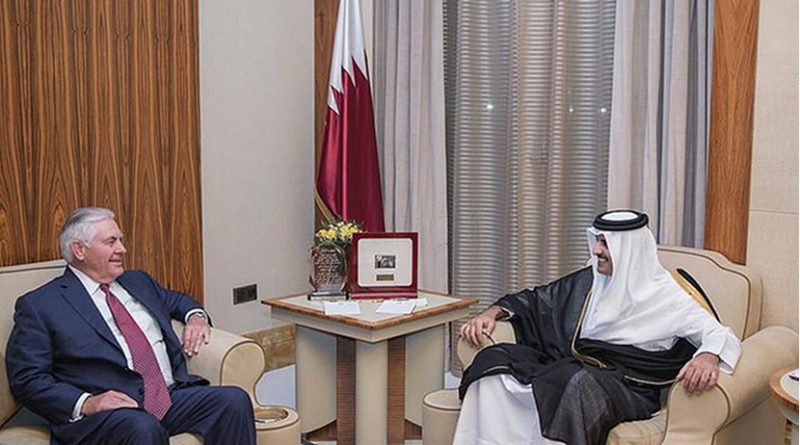 US Secretary of State Rex Tillerson was back in the gulf to try and mediate efforts to resolve the four-month Gulf Crisis between Qatar and Saudi Arabia, Bahrain, the United Arab Emirates, and Egypt. Secretary Tillerson played down the expectations of resolving the rift quickly, and he urged both sides to de-escalate the rhetoric and continue negotiations.

In June, the four countries imposed a land, air, and sea blockade on Qatar for its support to so-called terrorist groups like Hamas and the Muslim Brotherhood. Qatar has strongly continued to deny these allegations. The United States is still concerned that this crisis will continue to linger into its fifth month, and so far, unity is a far-fetched reality for the members of the Gulf Cooperation Council (GCC).

In a press conference with Secretary Tillerson, Qatari Foreign Minister Sheikh Mohammed bin Abdulrahman Al Thani has supported the mediation efforts by the United States to put a peaceful end to the Gulf crisis, and for the other countries to support dialogue. Tillerson has also supported dialogue, but Washington will not impose a solution on the rift between Qatar and the other GCC countries and Egypt. So far, all efforts to resolve the dispute have come to a dead end.

The United States has the power to impose greater leverage between Qatar and Saudi Arabia to create avenues that do not escalate the rhetoric, and hopefully Secretary Tillerson’s visit will change things going forward. Before Tillerson left Washington, there was nothing significant to expect from resolving the GCC crisis immediately, and the U.S still has limited options in doing so. The United States still remains concerned about the price that has been paid for letting this conflict continue, and the conflict should not continue.

So far, Qatar has fully cooperated in dialogue and is willing to move forward with the United States to engage the other side, especially Saudi Arabia, to come to the table and lift the blockade on Qatar.

Tillerson’s diplomatic paralysis for resolving the GCC crisis was pretty low, and the Trump Administration is desperate to find a way out of this crisis. At this point, the United States has finally realized that Saudi Arabia and the United Arab Emirates in particular, have miscalculated the fact that Qatar has made a lot of concessions like cutting down financing and support for extremism, and talking with the United States to get out of this quagmire. Qatar has done whatever it had to do, but the other side has not done enough to support the need for more dialogue and negotiations. If Secretary Tillerson can push the Saudis and the Emiratis to do more, then the environment for a peaceful solution to the crisis can come sooner rather than later.

When Tillerson visited the Gulf in July, he left without a breakthrough, but he did sign a memorandum of understanding (MOU) with Qatar that will enhance close cooperation between Washington and Doha to cut down on financing and support to extremist groups. Tillerson also urged diplomats to step up their efforts to find a solution.

Meanwhile, President Trump also offered to mediate with the Emir of Kuwait at a White House gathering early last month to end the crisis. In the wake of this visit, the Emir of Qatar and the Saudi Crown Prince held their first phone call since the crisis began in June, but this mediation did not last very long and quite frankly, it did not work.

There have been countless efforts to bring the parties to the table for discussions. However, it seems unviable to bring four countries to the table who refuse to negotiate or even engage in a discussion with Qatar over world issues that they have disagreements on. Qatar has made progress, for example, many American and European delegations have come to Qatar to help enhance diplomatic efforts between the Qataris and the other parties, but there has also been support from the global community to recognize that Qatar is a sovereign country that can conduct its own foreign policy that is independent from some of the other authoritarian governments in the region.

When it comes down to terrorism, the gulf countries must not fall into the trap of talking about the pretexts of terrorism, but discuss the origins of it. The Qatari people have strongly backed Sheikh Tamim and so far, the calls for regime change in Qatar by the four countries have made them look bad and it is embarrassing for the entire region.

What promoted Secretary Tillerson to criticize the Saudi-led bloc against Qatar was his frustration with the other GCC members to try to engage dialogue with Qatar and settle their differences amongst themselves. There has also been a lack of response from the Trump Administration for a long time on this issue to come up with a coherent solution that allows all the parties to resettle their differences and unite as a bloc.

Qatar has always been open to strengthening diplomatic relations with other countries. Russia is a strategic partner in the region, it shares energy ties with Qatar, and they both agreed to stabilize oil prices last year. Russia and Qatar have also collaborated on more stabilization in Syria, and with the region at large. As Russia’s role in the Middle East increases, Moscow is looking to play a more decisive role in maintaining peace and stability in the region as a player that is willing to talk to all regional powers like Qatar, Saudi Arabia, and Iran.

Qatar sees Russia’s role as an opportunity for more engagement, and the Saudi-led bloc against Qatar has allowed Doha to diversify its relations with other powers outside of the Middle East. Qatar has a dependence on its ties with Iran as well. The quartet’s denying of sharing airspace with Qatar has allowed Doha to share its airspace with Iran and let’s also not forget that Qatar and Iran share some of the world’s largest gas fields.

Qatar and Iran have also openly engaged in resolving their differences through dialogue, and Doha has called on all the GCC members and Iran to come to the table to settle their differences in hotspots like Iraq, Syria, Palestine, and Yemen.

The GCC countries can look for alternatives like mending diplomatic ties with Asian countries like China, Russia, and India, as well as others like Japan and South Korea. What the Gulf countries can do is step up their game and take responsibility for their actions on local issues like Iraq, Syria, and Yemen.

The United States still remains the most important player in the Middle East, but the United States needs the gulf countries for trade, investment, security, and oil. Throughout the Middle East, U.S foreign policy has become an utter failure. It’s failed policy of regime change has backfired in Syria, the United States has also left Iraq a balkanized nation after the invasion in 2003, Washington has also supported from the very beginning, the Saudi-led coalition’s war in Yemen where there has been massive tragedy and starvation for the Yemeni people, and the United States has also used the gulf countries as a proxy towards Iran, which has evidently proved to be a very dangerous path towards more escalation in the region.

Qatar is moving forward towards an independent foreign policy as an island and not as part of a peninsula. Doha has also said that if no one wants to talk to us, then we will not give up our sovereignty and not surrender to the bullying of Saudi Arabia and the United Arab Emirates to move forward independently from these nations. So far, the GCC crisis is moving forward, but it is not as painful as it was before the crisis began four months ago. There are losses on all sides, but Qatar, and the other four countries within the Saudi bloc must learn to live with each other peacefully and come up with a breakthrough diplomatically.

Home » Is Washington Willing To End The Gulf Crisis? – Analysis

A new study implicates 160 genes in brain shrinkage seen on MRIs of 45,000 healthy adults. The shrinkage is in