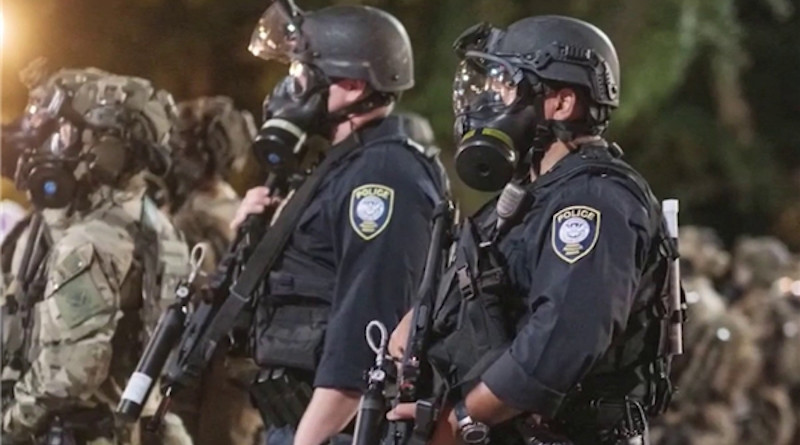 Fascism in the 21st century should not be a problem, but it is because of a number of factors: Social issues, religious divides, political venom, and a multi-year pathogen. The US and other countries around the world are increasingly seeing the word “fascism” used in life generally, not just in politics. Societies with long histories of racism and misogyny are more prone to fascists being able to organize themselves.

America is facing an extraordinary moment. The results of next week’s presidential election could be decided in the Supreme Court and might even lead to violence. Meanwhile, the exploitation of social media by various actors is well established.

In the 1930s, much of Europe’s political scene split between fascism and communism amid the liberal internationalism and post-First World War globalism. In Germany, Adolf Hitler used a 1933 arson attack on the German parliament to launch legal procedures that established emergency rule, which formed the foundation of the Nazi dictatorship. This pathway to power brought with it key elements of fascist behavior, including division, absolute rule and political suppression, sometimes deadly and onerous. The German example of this time served as a model that spread globally, influencing other countries such as Italy and Japan.

Fascism as an affliction is based on hate. Understanding how this hate begins is important. Some argue that there is a conceptual space regarding a mythical homeland or future ethno-state. Cyberspace communities feature meeting places for an array of subcultural groups, from the right but also the left. “Alternative fact” narratives animate those who read and accept such material as the truth. The manner in which fascism was communicated in the 20th century is far different from how fascism is today. Fascist “lifestyle themes” are important to recognize, as are symbols and other social markers.

Around the world, the trends of 21st century fascism are disturbing. What we see today in Hong Kong and Belarus is the ebb and flow of a type of fascism accelerated by media trends and the use of urban suppression tactics. Leaders’ use of terms such as “law and order” is appealing or dismaying on several levels.

Fascists like to use terms such as “enemy of the people” in order to draw attention to a particular group. In the 21st century, social media quickly amplifies such attitudes and counter-attitudes, further dividing and polarizing societies. What is going to give? The tensions are palpable. After French President Emmanuel Macron’s Islamist commentary in the wake of the beheading of a French schoolteacher evoked a wave of responses and ignited a firestorm of accusations in much of the Islamic world, there is more trouble ahead.

One key issue is fascism’s impact on young people. People born in the 2000s are on the road to becoming the leaders of tomorrow but the combination of fascist tendencies and a worldwide pandemic is leading to uncertainty.

The youth are seeking their moment in the sun and it is not occurring. The virus stops much of the activity that is required to stay away from the ideologies of hate, fear, and power. Everyone is suddenly at risk of becoming an extremist and ultimately a fascist. The ideas of political correctness are being criticized for their “wokeness,” which increases the probability of continuous fascist assaults on institutions and people. The battle over points of view is what drives the continuous collision of warped ideas.

In the current toxic environment, many are assailing other people based on their race or religion. The fascist mentality relies on surveillance, spying, and entrapment within the communities that are marked as afflicted by “extremism.” That label runs two ways, so that the one who is accusing another of being an extremist is himself guilty of extremism. The internet — and the dark web in particular — offers a forum for sheer hatred for everyone. Terrorism, militia behavior and violence are not down to color, they are human, so individual responsibility is what is missing. Doxing, or outing fascists in this case, exposes more ills than cures because the exposure can quickly turn the subject into a victim. Doxing is commonplace in many societies as a form of civil or vigilante justice.

In America, the tensions between anti-fascists and right-wing extremist groups like Patriot Prayer and the Proud Boys are escalating as a result of the ongoing Black Lives Matter protests, which began following the death of George Floyd in May. The rapid-fire nature of current events is creating an atmosphere filled with hatred on all sides. There is also increasing confusion over what it means to be anti-fascist. Maybe a better definition will appear next month.