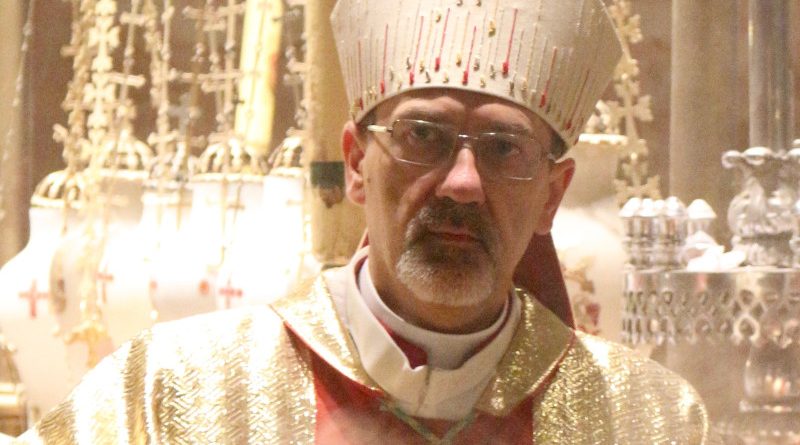 Pope Francis’ appointment of 55-year-old Italian archbishop Pierbattista Pizzaballa as the 10th Patriarch of Jerusalem this week has produced mixed reactions, but one issue remains key: Will the spiritual leader of hundreds of thousands mostly Arab Catholics represent his diocese and reflect its aspirations and ambitions?

The qualities that candidates must have to be considered for a role as a bishop are listed in Catholic canon law 378-1. As well as being at least 35 years old and having been a priest for at least five years, they should be “outstanding in strong faith, good morals, piety, zeal for souls, wisdom, prudence, and human virtues.” They should be well versed in sacred scripture, theology and canon law, and preferably hold a doctorate in one of these fields.

Pizzaballa ticks all of these boxes, as do many Arab bishops and priests. In choosing a patriarch, the Vatican is supposed to review a list submitted by the local diocese and the outgoing patriarch and, before a decision is made, a secret consultative process with senior Catholics is supposed to take place. It is not clear if any of these mechanisms were activated in this instance.

Senior Catholic priests and bishops in Jordan and Palestine say they were not consulted and that they had sent a request to Rome that the ethnicity of the next patriarch should reflect that of the believers he will lead.

One factor that is said to have been important in the decision-making process was finances. It appears that difficulties arising from one particular institution had the lion’s share of influence on the Holy See’s decision. The American University of Madaba, which was established as a Papal response to the requests of Christians in Jordan for a Catholic University, has placed severe financial strains on the Latin Patriarchate of Jerusalem.

Pizzaballa, who was previously head of the Franciscan priory in Jerusalem for 12 years, was chosen by Rome to solve the financial problems. He spent four years on the issue, culminating in the June sale of church-owned property in the Nazareth area that, according to Pizzaballa himself, covered 60 percent of the Latin Patriarchate’s debt. The rest of the debt will be rescheduled over the coming years.

Some argue that Pizzaballa’s appointment as patriarch was a form of reward, while others say it reflects a colonial attitude that sees Europeans as much more worthy than locals. Those who reject the latter argument simply say that Jerusalem is very important to Christianity and that the selection process for the spiritual head of the Latin Church in the region should not be restricted by nationality.

However, this mostly applies to the holy places for which there has always been a non-Arab custodian, whereas the position of the Patriarch of Jerusalem is directly connected to the spiritual and other needs of the diocese. Therefore, the head of the Latin Patriarchate, which is responsible for hundreds of thousands of largely Jordanian and Palestinian Catholics, needs to, at a minimum, reflect the community and be able to speak with them in their own language.

When the Latin Patriarchate was re-established in 1847, the first seven patriarchs were non-Arabs. While few Arab priests were educated and versed in theological issues at the time, the situation now is totally different. The Vatican has sent priests from Palestine and Jordan to Africa, Asia, and even Europe and the US. This means that there are plenty of priests who have the required qualifications.

In 1987, Pope John Paul II appointed Michel Sabbah as the Patriarch of Jerusalem, making him the first native Palestinian to hold the office in centuries. From 1999 to 2007, Sabbah was the president of Pax Christi International, a Catholic organization promoting peace. After his retirement in 2008, Jordanian Fouad Twal was appointed patriarch.

It is true that church and state should be separate but, unfortunately, in the Middle East every single person’s status is determined by the religion he belongs to. Religion and politics have played a role in the occupation of Palestine, with Christian Zionists justifying the Israeli occupation and some Greek Orthodox leaders having been involved in turning over property to radical Jewish groups, much to the anger of the Palestinians.

In the region, the Melkite church, Lutherans, Anglicans, and various Evangelicals have local leaders. Of course, in those churches, a certain decentralization exists and the churches have local autonomy. The Vatican’s political position on Palestine has been well received and appreciated and one is sure it will continue in the years to come.

Patriarch Pizzaballa has said that his new post represents a huge weight of responsibility on his shoulders. While congratulating him and praying that he will be able to carry this heavy burden, one is hopeful that, in all his words and actions, he will genuinely and honestly reflect the pains, desires and hopes of the ongoing suffering in Palestine and the region.

Residents and healthcare workers that work in care homes for the elderly, and people with disabilities will be the first