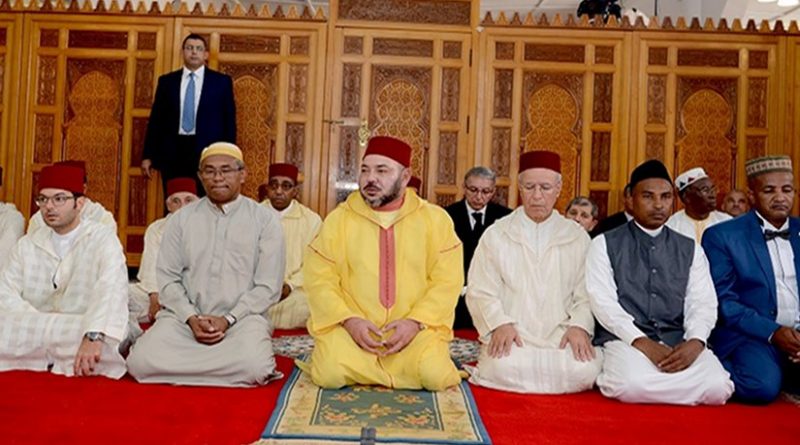 Morocco is continuing to promote its moderate version of Islam as a counterweight to the widening jihadist menace in sub Saharan Africa by training hundreds of imams from affected countries. Moreover, and in June 2016 King Mohammed VI chaired in the nation’s spiritual capital Fez the installation ceremony of the Higher Council of the recently set up Mohammed VI Foundation for African Islamic scholars. During that ceremony the King stated that ” I view the Mohammed VI Foundation for African Ulema as an institution for cooperation, for the exchange of experiences and for the Ulema to make concerted efforts to fulfill their duty and turn a spotlight on the true image of the pristine Islamic faith as well as on its open-minded values, which are based on moderation, tolerance and coexistence. The aim is to make sure those values help us promote security, stability and development in Africa.”

He added, “I am convinced the Foundation, through its branches in African countries, and together with other religious institutions, will play its role in disseminating enlightened religious precepts and in combating extremism, reclusiveness and terrorism – which our faith does not embrace in any way – but which are advocated by some clerics, in the name of Islam.”

Sufism attracts more young Africans because of its tolerance, due to the easy interpretation that gives to the Qur’an, its rejection of fanaticism and its embrace of modernity. Young people are the principles of” beauty” and” humanity”. Sufism balanced lifestyle that allows them to enjoy arts, music and love without having to abandon their spiritual or religious obligations. Sufi orders exist throughout Morocco. They organize regular gatherings to pray, chant and debate timely topics of social and political, from the protection of the environment and social charity to the fight against drugs and the threat of terrorism.

Apparently Morocco’s religious authority – Imarat Lmouminin – is highly venerated by many Africans, whether in Mali, Senegal, Cote d’Ivoire… In all his trips in Africa, King Mohammed as Commander of the Faithful, receive all leaders of major Sufi orders. In all his trips in Africa, he provided thousands of copies of the Quran issued by the Mohammed VI Foundation for Holy Quran Publishing to be distributed mosques and other major Muslim institutions. In short, a credible and very successful spiritual diplomacy led by the King to promote a tolerant Islam that teaches respect, love to other religions and contribute efficiently to counter all extremist voices who unfortunately seem to gain ground in some countries in West Africa.

The new foundation (Mohammed VI Foundation for African Ulema) will be a key element in Morocco’s ongoing efforts to promote religious moderation and tolerance as a shield against extremism in the region. The spiritual ties between Morocco and many African Sub-Saharan countries are mirrored throughout history in the exchange of muslim scholars, saints and sufis who spared no effort to spread the genuine Islamic values of tolerance and moderation. This leading institution will be the most convenient forum where African Ulema can debate Islamic thought, unify and coordinate their efforts to disseminate the true value of Islam : tolerance, coexistence, peace and respect for other religions

The new foundation is therefore an additional link in the chain of moves initiated by Morocco to consolidate moderate Islam in among Muslim communities in the African continent and preserve Them from grips of extremism and radicalization that result only in havoc and chaos.

“Their task is to help and guide imams in mosques to preserve the fundamentals of Islam in Morocco, based on the Malikite rite, contrary to takfirism, which is constantly invading the minds of our young people,” the Moroccan Minister of Islamic Affairs Ahmed Toufiq has said.

In all his trips in Africa, King Mohammed VI makes sure to perform Friday prayers in the presence of hundreds of African Muslims and at the end of the prayers he donates thousands of copies of the Quran. Today, and on his official visit to Madagascar, he performed the Friday prayer at the Antananarivo Mosque. Then, the Sovereign donated a consignment of the holy Quran (Mushaf Al Mohammadi Acharif) to the parties in charge of religious affairs in Madagascar. The Sovereign handed copies of the Holy Quran to the representative of Malagasy senators and to the vice-president of the Malagasy Muslim Association.

The Quran copies, published by the Mohammed VI Foundation for Holy Quran Publication, will be distributed in the different mosques of Madagascar.

A well-timed Royal initiative that aims to disseminate the true values of Islam: tolerance, coexistence and true love contrasting starkly with radical “takfirist” ideology that brands non-practicing as infidels.