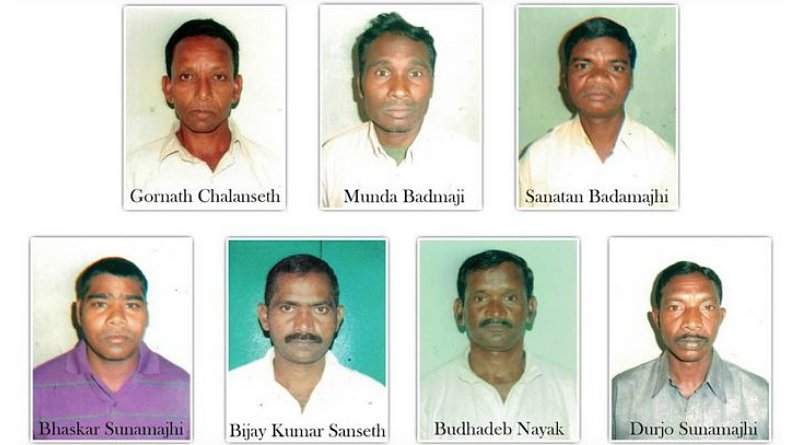 The seven Christians convicted and jailed in 2013 over the killing of a Hindu religious leader. Activists and church leaders say they were wrongfully convicted. (Photo by Anto Akkara)

India’s Supreme Court has granted bail to five Christians who many say were wrongfully convicted of the 2008 killing of a Hindu leader during anti-Christian violence in Kandhamal, in the eastern state of Odisha.

Their release comes after two others, Gornath Chalanseth and Bijaya Kumar Sanaseth were freed earlier this year.

All seven have maintained their innocence.

They were convicted and jailed for life in 2013 for killing Swami Laxmanananda Saraswati, an 85-year-old Hindu religious leader and five of his disciples in Kandhamal district in August 2008. The deaths triggered four months of anti-Christian violence.

At least 100 people were killed, and 56,000 others displaced during the violence, which also saw thousands of homes and about, 300 churches, convents, hostels and presbyteries torched.

Human rights activists, as well as journalists and church leaders have always disputed claims that Christians were behind the killing of the Hindu leader, despite a Maoist group having reportedly claimed responsibility.

They say the seven convicted men were framed and picked up by police indiscriminately to appease hard-line Hindu groups and that the convictions were the result of a conspiracy theory stemming from longstanding anti-Christian sentiment that lacked “evidence and authenticity.”

The convictions shocked India’s Christian community and kickstarted a campaign to secure their release.

Two previous applications for bail were rejected by the Odisha High Court, in the former state capital Cuttack, in 2018.

Anto Akkara, a journalist who has campaigned for their release, said the granting of bail was a first step towards their acquittal.

“I am thrilled that the Supreme Court has given freedom to these innocents. But this is not the end. It is only bail,” Akkara told UCA News.

“Now the focus must turn to the Odisha High Court at Cuttack as the appeals against their questionable conviction has been dragging on there for six years,” he said.

Akkara also called for an independent investigation into “who hatched this conspiracy” against the seven men and who was really behind the Hindu leader’s killing.

Father Augustine Singh, a Cuttack-Bhubaneswar Archdiocese psychologist who has offered counseling to the men’s families and other victims of the Kandhamal violence, welcomed the release of the men.

“Everyone is praising the Lord. We are happy and grateful to all concerned, who supported this cause,” Father Singh said. “We are also happy that justice is given, though it took time. The next step is pinning hope in a fair justice system.”