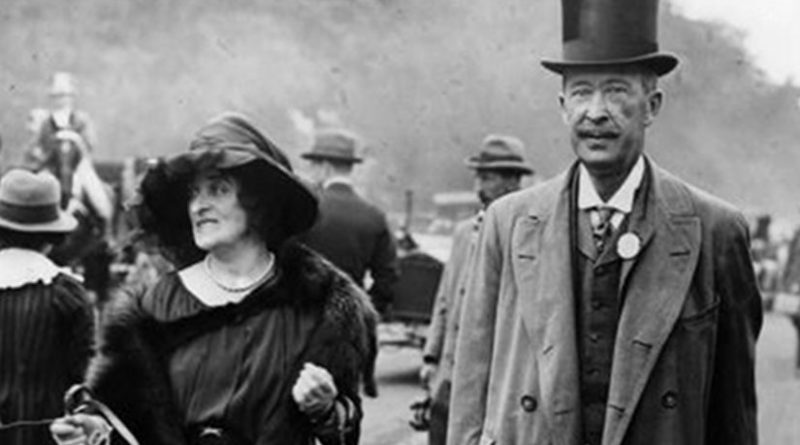 Lady and Lord Carnarvon at the races in June 1921. Source: Wikipedia Commons.

Downton Abbey is phenomenon. A dazzling remake of Upstairs, Downstairs (1971–75), which was arguably better as a drama (well worth a second viewing), but which lacked Downton‘s docudrama cache and the breathtaking sets. Both series revisit the British empire at its peak, in the late 19th century, when the Union Jack covered half the globe, and the ruling elite lived a high life that can never be matched, no matter how many millions you may have. Genuine fairytale realities, heaven on earth — at least for the elite.

You can build replicas of manors and wear costumes all you like, but the social order where the lives of millions of servants, workers and tradesmen revolve around the whims of a tiny aristocracy, where everyone had their clearly defined role in the social order, is long gone. A journey into the world of Downton Abbey is a journey into an alternative reality.

With no electricity, no cars, no telephone, but gas lighting, railways and the new telegraph, you watch the advent of all of those inventions that make our world today, and experience how they transformed everyday life. You are touched by the spectre of revolution, both the Irish War of Independence in episode one (the driver Tom), and then by the odd socialist (not the servants) after the Russian Revolution.

One key plot device is the delicate treatment of the crucial role that Jewish banking money played in the 19th century elite’s fortunes. Lady Grantham (Cora Crawley) is revealed in passing as an American Jewess, whose money saved the Abbey from bankruptcy, but whose origins are (sort of) a family secret. The outcast, though still privileged, role of Jews in British society is implicitly highlighted by the will of the fourth Earl, the father of the Downton Abbey‘s Lord Grantham, Robert Crawley. He had put an “entail” on the estate, stipulating that unless Cora produced a male heir (which she didn’t), the estate would pass over to the closest male relative in the family, a third cousin.

A comparison with the historical Downton Abbey and its rulers (we will never know what the servant class was really up to) reveals a bit more grit, lots more grime and a big helping of sensation.

The real Downton Abbey is Highclere Castle in county Hampshire, in the southwest, not in Grantham in county Lincolnshire, in the midlands.  It was the home of the third creation of Earls of Carnarvon, dating from the late 1700s, and miraculously, still is run by the Earl of Carnarvon (the eighth). The second Earl of the first creation, was a royalist who died in the Civil War in 1643. The second creation was from 1714 whose first Earl was Handel’s patron.

The third creation were mostly pretty run of the mill aristos. The especially interesting ones are featured in Downton Abbey. The most illustrious was the fourth Earl, the supposedly bigoted father of ‘Robert Crawley’, who dies before the serial gets started, and had put the entail on his will, creating the central drama of the series, a complicated love plot. The fourth Earl also renovated what was a modest Jacobean manor, attaching the towers and making it into a faux castle in Italianate style in 1849, a passion in 19th century Britain.

He, like all the Earls, was a Whig politician, the most capable of the lot, rising to Secretary of State for the Colonies and Lord Lieutenant of Ireland. He wrote Canada’s constitution, the British North America act in 1867. His will showed that he was very much against his son’s marriage to a Jew, whose children would be technically Jewish, which would undermine the ‘British’ character of Carnarvon. (Could this be legally appealed in our days of political correctness on the basis of antisemitism and sexual discrimination?)

The fifth Earl of Carnarvon (in Downton Abbey, Rober Crawley), George, is the most interesting. He indeed defied and disgraced the family by marrying a Jew. But his beautiful wife, Almina (Cora Crawley), was the daughter of Alfred de Rothschild’s mistress, not of an American Levinson. She presided over stunning balls, and financed his wild life as an adventurer till his sudden death. Carnarvon was on the skids, and de Rothschild filled the coffers with millions, making Almina Lady Carnarvon.

George was a rake, an owner of racehorses and a reckless driver of early cars, who ended up blind because of a motor accident (Robert’s son Matthew Crawley in Downton Abbey drives wrecklessly and dies), allegedly a reluctant husband. Despite his virtual blindness, he went on to become a renowned explorer (and pilferer) of Egyptian tombs, and friend of TE Lawrence (of Arabia). He opened Tutenkhamun’s tomb in 1922 and died the next year of a mosquito bite, King Tut’s curse, at the age of 56.

Almina, left behind in England, dutifully produced a male heir, the sixth Earl, without the nail-biting drama depicted in Downton Abbey, though the sixth Earl writes in his memoirs that his upbringing was “unloving” and after his father died, his mother refused him an inheritance, and left him responsible for the upkeep of Highclere Castle.

She remarried only eight months after the death of her Earl in a public scandal involving lots of adultery, theft and money laundering on Almina’s part. So much for the entail and motherly love. Clearly Almina considered the Rothschild money hers alone. Ironically, she died alone and in poverty in Bristol at the age of 93. There are many more scandalous details to Almina’s life, explored in William Cross’s The Life and Secrets of Almina Carnarvon (2011).

The series’ depiction of a cash strapped decaying aristocracy, selling their heritage through marriage to keep things going, is true. The still bankrupt sixth Earl found his American heiress, Anne Wendell, as did many other down-on-their-luck aristos in the 1920–30s. Hardly a love match — he dumped Anne in 1936 for the ballet dancer and choreographer, Tilly Losch. His obituary by Hugh Massingberd famously described him as a “most uncompromisingly direct ladies’ man”.

The series is a metaphor for what happened to Britain during the past century and a half. A fading empire, whose rulers were craven and decadent, where the enterprising British Jews, though only 0.5% of the population, are prominent in political life, presiding over a politically correct culture where the Downton Abbey bigots (the fourth Earl and the homophobes) are vanquished. Yawn.

Downton Abbey now provides a steady flow of rent/ royalties and visitors to Carnarvon, keeping it out of the doghouse without resorting to marriages of convenience. Future Earls have rosy but bland prospects in store, unlike during the zenith of Carnarvon Castle under the politically incorrect fourth Earl and the adventurous rake, the fifth Earl, who mysteriously succombed to the Mummy’s curse, made famous in dozens of horror movies ever since.