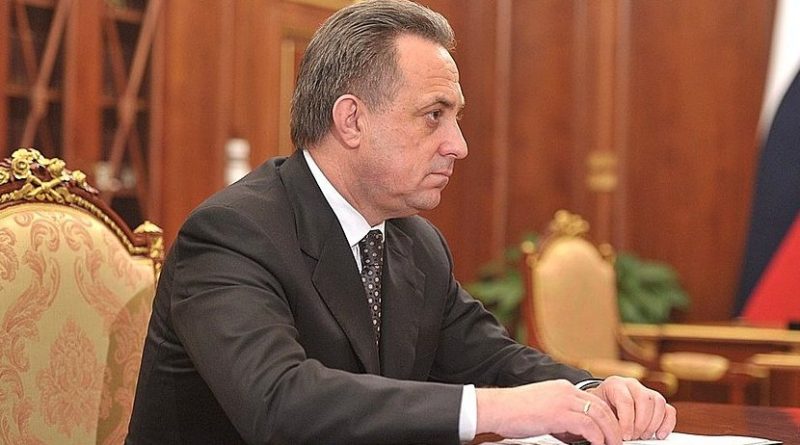 (RFE/RL) — Russian Deputy Prime Minister Vitaly Mutko has been replaced as chairman of the 2018 World Cup organizing committee amid pressure over allegations of state-sponsored doping in Russia.

Aleksei Sorokin, currently the chief executive of the committee, will take over the chairmanship, giving him the most visible role in the globally watched games scheduled for June and July, while Mutko will remain involved in logistical planning, the organizating committee announced on December 27.

“Mutko will continue to oversee the preparations of the regions as well as coordinate the construction of the necessary infrastructure,” the committee said in a statement that expressed “great regret” over his departure.

Mutko’s resignation comes two days after he said he would temporarily step down as president of the Russian Football Union while fighting a lifetime ban from the Olympics.

Investigations by the World Anti-Doping Agency and the International Olympic Committee alleged Mutko was involved in a state-sponsored doping program during the 2014 Sochi Olympics.

Mutko, 59, who served as Russia’s sports minister during those Olympic games, has strongly denied all doping allegations.

Olympics authorities didn’t accuse Mutko of being personally involved in doping, but they banned him from the Olympics for life, saying he and his ministry bore overall responsibility for “failure to respect” anti-doping rules.

Until this week, Mutko had retained his high-level posts in Russia throughout the nation’s two-year doping scandal, even receiving a promotion to deputy prime minister after the allegations emerged in 2015.

Hundreds of Russian athletes have been banned from the Olympics and other major sports events in the wake of the scandal.

Mutko maintains that Russian athletes were clean at the 2014 Olympic Games and that the state played no role in individual doping cases, despite documentation cited by Olympic authorities. Russia maintains that the blame for doping rests on individual athletes and their coaches.

On December 27, Mutko said he has filed a claim in the Court of Arbitration for Sport contesting his Olympic ban.

Mutko had been defiant at the World Cup draw in Moscow earlier this month, dismissing calls for him to leave his role as front-man for soccer’s most important tournament.

But FIFA, world soccer’s governing body, has faced calls to open disciplinary proceedings against Mutko from sports officials around the world concerned about the serious doping allegations against Russia.

FIFA did not mention the doping questions in a statement acknowledging Mutko’s resignation, which thanked the Russian minister for his “invaluable contribution to the preparations for the competition so far.”

Russia opens the World Cup against Saudi Arabia on June 14 in Moscow, which is also where the final game will be staged on July 15.

The games will be played in 11 cities around the country. Authorities have been building or modernizing facilities in preparation with a budget of about $11 billion.