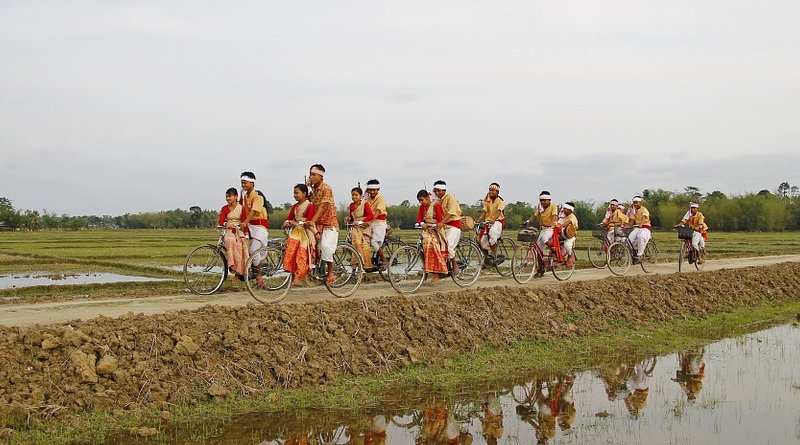 The Citizenship Amendment Act, 2019 (CAA), which came into force on 12 December 2019, amends the Citizenship Act, 1955, to state that “any person belonging to Hindu, Sikh, Buddhist, Jain, Parsi or Christian community from Afghanistan, Bangladesh or Pakistan, who entered into India on or before the 31st day of December, 2014 and who has been exempted by the Central Government by or under clause (c) of sub-section (2) of section 3 of the Passport (Entry into India) Act, 1920 or from the application of the provisions of the Foreigners Act, 1946 or any rule or order made thereunder, shall not be treated as illegal migrant for the purposes of this Act.”

The CAA’s implications for the state of Assam are different compared to the rest of India due to the National Register of Citizens (NRC) exercise, and the context of the Assam Accord (1985). A majority of those opposing the CAA in Assam have argued that it threatens the identity and culture of the Assamese people. This is tied to an ethno-nationalistic sentiment in the state, which is different from the wider Hindu-Muslim binary that dominates debates on the CAA in the rest of the country.

Why is Assam’s Case Different?

Underthe CAA, the cut-off date for persons belonging to the six abovementioned communities claiming citizenship in India is 31 December 2014. This date clashes with the NRC deadline (as implemented in Assam) of 24 March 1971, rendering the entire NRC exercise in the state meaningless. Those previously identified as illegal migrants in Assam can now apply for citizenship under the CAA. This defeats the purpose of the NRC, i.e. to detect and deport illegal migrants from Bangladesh. It also creates fertile grounds for forgery by those excluded from Assam’s NRC list to seek citizenship by claiming to be from the relevant countries.

The CAA violates certain provisions of the Assam Accord. The addition to Section 2(1)(b) of the Citizenship Act, 1955 negates or dilutes the provision under Clause 5 of the Accord, which requires any person entering Assam between 1 January 1966 and 24 March 1971 to register themselves under the Registration of Foreigners Act, 1939. The amendment to the Third Schedule also dilutes Section 6A of the 1955 Act (which is derived from the Assam Accord) which clearly states that any persons who had migrated to Assam between 1966 and 1971 were eligible to become citizens of India either immediately or after a period of ten years. However, the CAA 2019 reduces this period from ten to five years.

The CAA also clashes with Clause 6 of the Assam Accord, which states that “Constitutional, legislative and administrative safeguards, as may be appropriate, shall be provided to protect, preserve and promote the cultural, social, linguistic identity and heritage of the Assamese people.” The Indian government denied any violation and set up a Joint Parliamentary Committee (JPC) to look into the proper implementation of Clause 6. This Committee proposed a categorisation of Assamese into three groups: indigenous tribal; indigenous Assamese speaking people; and other indigenous people of Assam. However, it did not clarify the parameters determining the categorisation,  causing further confusion.

Lack of clarity on the definition of the third proposed category (‘other indigenous people of Assam’) has implications especially for the Bengali, Nepali, and Hindi speaking populations who have been resident in Assam for generations. To arrive at an accurate definition, representatives from each of the over 30 ethnic groups in Assam must be consulted—not merely the majority groups. The JPC was dissolved within six weeks of its formation, which resulted in the setting up a High Level Committee. The High Level Committee, too, lacked diversity and representation, with only one Muslim and no women among its members. CAA 2019 creates further confusion by not defining the term‘Assamese people’clearly.The lack of a clear and legal definition for the terms ‘Assamese people’, ‘indigenous people’, and ‘local identity’ aggravates the issue of a thorough implementation of Clause 6 of the Assam Accord.

The 2014 Supreme Court order to conduct an NRC in Assam for the identification and deportation of illegal migrants from Bangladesh was received with widespread jubilation in the state. However, this sentiment began to erode after the final (Assam) NRC list was released in September 2019. Many expressed concerns that the list’s figure of 1.9 million was much lower than what they believed was the actual number of undocumented immigrants in Assam.

With the CAA regularising illegal Hindu migrants excluded from Assam’s NRC list and enabling them to claim Indian citizenship, the fear of Assamese identity and culture being under attack has come to the forefront again. The dominant Assamese speaking population in the Brahmaputra Valley believe that they will be reduced to a minority in their homeland. Given how this ethno-nationalism is structured around linguistics, land, and a common homeland, there are concerns that the regularisation of illegal Hindu Bangladeshi migrants will further fuel an insider-outsider narrative, which, if left unchecked, will have negative consequences for social stability and law and order.