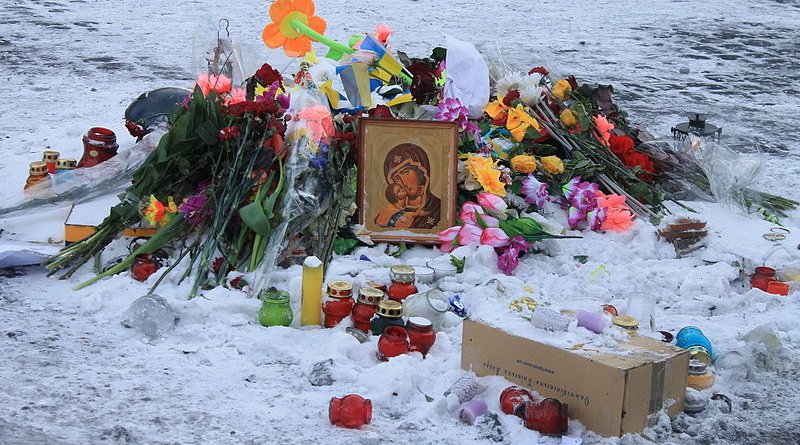 There have been no final verdicts yet in cases against special forces policemen accused of shooting protesters dead in Kyiv during the 2014 Euromaidan uprising, even though more than five years have now passed.

rogress in cases against the alleged killers of the ‘Heavenly Hundred’, the 100 activists who were killed by Berkut special forces policemen and others during the Euromaidan protests from November 2013 to February 2014, suffered a setback this year.

As Ukraine’s new government embarked upon a reform of the Prosecutor General’s Office, the pre-trial investigations were handed over earlier this month to the State Investigation Bureau, raising the likelihood of delays.

The process of transferring the cases is difficult, and the State Bureau of Investigations does not have enough investigators to conduct work on this scale. It is currently awaiting legislative amendments to increase the number of its employees.

The Prosecutor General’s Office insists that most of the Euromaidan crimes have already been solved – meaning that it has established the circumstances of the killings and who the organisers and direct perpetrators were.

There are 66 suspects for the Euromaidan killings but in some cases, specific perpetrators have not yet been established.

Meanwhile, 36 suspects continue to work in law enforcement, ten of them in leadership positions. These are people who are accused of organising the murders. In Kyiv alone, former Berkut officers make up 30 per cent of the police force, and some of their names appear in criminal cases.

“[This affects] the attitude of those who could testify,” said Serhiy Horbatiuk in December 2018, when he was Director of Special Investigations at the Prosecutor General’s Office.

Some officers who have been identified via video using excessive force against Euromaidan protesters have been charged, but are still working on the force. Horbatiuk suggested that this could put pressure on colleagues who might testify against them.

Any potential witness “understands that his colleague or manager who is a suspect continues to work, so any real evidence does not lead to the law enforcement agencies replacing these people”, Horbatiuk pointed out.

Twenty-six former Berkut officers – members of what became known as the force’s ‘black company’ – are suspected of shooting at Euromaidan protesters.

Twenty-one of them are hiding. The head of the ‘black company’, Dmytro Sadovnyk, fled to Russia in the autumn of 2014, while a further 20 absconded from Ukraine at the end of February 2014.

Sixteen of them are now in Russia and four in annexed Crimea. Some managed to obtain Russian citizenship, others were granted asylum by Moscow.

Despite a request from the Ukrainian prosecutor’s office, Russia refuses to hand them over.

That means only five are on trial, with hearings are still ongoing at Kyiv’s Svyatoshynskyi court.

However, one former Berkut officer, Andriy Khandrykin, who was accused of beating and torturing Euromaidan activists in January 2014, was acquitted this August due to a lack of evidence. Prosecutors plan to appeal.

They are accused of obstructing peaceful gatherings and attempted murder – shooting at activists – on February 18, 2014.

Journalist Viacheslav Veremii was shot and fatally wounded by ‘titushki’ the same day. After more than three years on trial, the organiser of the attack on Veremii, Yuriy Krysin, was sentenced to five years in prison in 2018.

Another suspect, Armen Sarkisyan, who investigators claim organised a gathering of ‘titushki’ and acted in the interests of the interior minister at the time, Vitaliy Zakharchenko, is still on the wanted list.

President Viktor Yanukovych, who was ousted by the Euromaidan protests, was sentenced in absentia to 13 years in prison in January 2019 for treason and assistance in waging war against Ukraine.

Yanukovych fled Kyiv in February 2014 at the height of the protests, and then went into exile in Russia, where he remains to this day. His lawyers have filed five appeals against the verdict convicting him, and hearings are ongoing.

Another nine former officials who led the country before the end of February 2014 are suspected of offences including organising a criminal group, obstructing a rally on Maidan Nezalezhnosti, the square in central Kyiv that gave the revolution its name.

Seven of them are on the wanted list and two remain in Ukraine –a former senior politicians with Yanokovych’s Party of Regions, Oleksandr Yefremov and former Justice Minister Oleksandr Lavrynovych.

He is also charged with high treason and organising and assisting the creation and activities of the Russian-backed separatist Luhansk People’s Republic. On top of that, he is accused of illegally seizing property from the state-owned Luhanskvuhillia coal mining enterprise.

Starobilskyi district court in the Luhansk region is looking at the case, and Yefremov has been in custody for more than three years.

Yefremov is also one of the defendants in a case arising from the so-called ‘January 16 dictator laws’, a set of anti-protest laws restricting freedom of speech and freedom of assembly that were passed when Yanukovych was still in office in January 2014, and were aimed at cracking down on the Euromaidan demonstrations.

Former Justice Minister Lavrynovych is accused meanwhile of embezzling more than $1 million from the state budget in 2013. In another case, Lavrynovych is charged with facilitating the seizure of power by Yanukovych and participating in organising a constitutional coup in 2010.

The ex-minister faces five to ten years in prison if convicted.