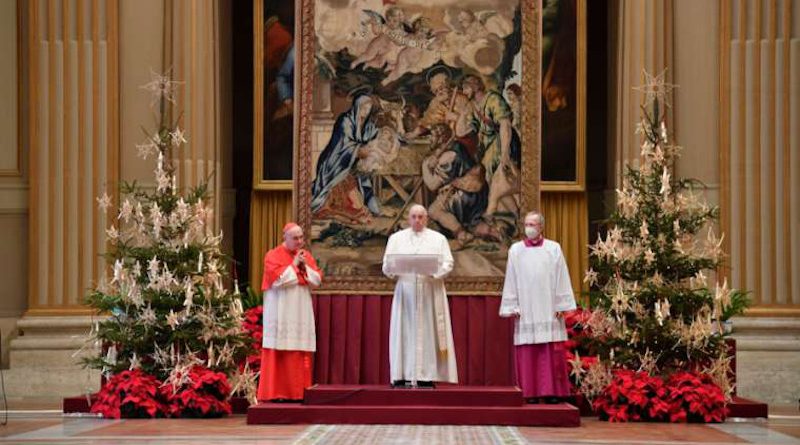 To say nothing once about a major human rights crisis in a particular country might be excused, perhaps due to lack of information. To say nothing twice about the same human rights crisis could be excused, perhaps given that the world faces many woes and challenges. But to ignore one of the biggest human tragedies of our time while simultaneously name-checking almost every other crisis around the globe suggests a persistent, deliberate and therefore utterly shameful decision to stay silent for political reasons.

Yet that’s what Pope Francis did in his Urbi et Orbi address on Christmas Day when he yet again failed to mention the genocide of the Uyghurs, the persecution of Christians in China, the destruction of Hong Kong’s freedoms, forced organ harvesting from prisoners of conscience, the crackdown on all forms of civil society or free expression, atrocities in Tibet and other human rights violations perpetrated by the Chinese Communist Party regime.

In so many other ways, the pope’s Christmas message was spot on, as we would expect from a pontiff who speaks so much about the poor, the marginalized, the oppressed.

He spoke of the importance of us acknowledging one another as brothers and sisters, particularly given the world’s challenges and especially with the ecological crisis and the coronavirus pandemic. He spoke of the need for fraternity beyond our specific identity, caring for our fellow human beings of other religions, ethnicities or nations. With those sentiments, I wholeheartedly and passionately agree — and that’s why I love this pope. Those words are for me music to my heart as someone who has long championed freedom of religion or belief for everyone, everywhere, all faiths and none.

He spoke of “the light of Christ” who comes “for everyone, not just for some.” He spoke with humility for humanity — and again, that’s why I love and am inspired by him. “Every other person is my brother or my sister,” he said. “In everyone, I see reflected the face of God, and in those who suffer, I see the Lord pleading for my help. I see him in the sick, the poor, the unemployed, the marginalized, the migrant and the refugee: brothers and sisters all.” Beautiful.

I am really glad he mentioned all these countries. Indeed, my human rights activism was born in Nagorno-Karabakh, which I visited just as the last ceasefire was signed 26 years ago, so I absolutely support his plea for peace in that ancient Christian homeland. I lay awake at night in a bombed-out hotel in Stepanakert as a young undergraduate hearing the snipers on the front line and praying for a better world, so I stand with Pope Francis in seeking peace in the Caucasus.

I am especially pleased that he prayed for the Yazidis — in his words “sorely tried by these last years of war” — and the Rohingya, with whom I have worked for almost 15 years, for whom he prayed: “May Jesus, who was born among the poor, bring them hope amid their sufferings.” The atrocities the Rohingya have faced — some of which I have had a first-hand glimpse of — are among the very worst of man’s inhumanity to man, a genocide in full flow, and the pope’s consistent support is welcome.

Yet the mention of Yazidis and Rohingya, as welcome as it is, makes the repeated omission of the Uyghurs even more glaringly obvious once more. Of the world’s genocides and mass atrocities, mentioning two and repeatedly refusing to mention the third suggests there’s an agenda afoot.

Although Pope Francis mentioned the Uyghurs briefly — for the very first time and in the mildest of mild passing references — in his new book Let Us Dream: The Path to a Better Future, he has said nothing further since. And Bejing reacted furiously even to that very modest comment. But is the pope seriously going to allow himself to be cowed by Xi Jinping’s fury and censor out references to some of the world’s gravest human tragedies just because they occur in China? Seriously?

The Vatican-China deal has attracted much commentary, so I won’t repeat it here. I am not a natural critic of Pope Francis. Indeed, it is because I love him that I’m so perplexed by his blind spot on China. And it’s because of the atrocious human rights crisis in China that I simply cannot stay silent.

But the truth is that if the deal is to be worth anything whatsoever, it should result in two things: better protections for Catholics in China and a more honest dialogue between the Vatican and the Chinese regime. So far, it has achieved the very opposite. Repression of Catholics, alongside every other faith, in China has intensified in recent years.

And the Chinese Communist Party seems to have installed censors in the pope’s inner sanctum who forbid him from saying anything about China or from meeting with those, such as Hong Kong’s courageous Cardinal Joseph Zen, who would tell him the truth. The Chinese regime has bought Pope Francis’ silence and silenced his soul. This is a scandal.

In stark contrast, the Jewish community has shown inspirational leadership. Earlier this year the president of the Board of Deputies of British Jews, Marie van der Zyl, wrote to the Chinese ambassador in London, Liu Xiaoming, saying: “Nobody could … fail to notice the similarities between what is alleged to be happening in the People’s Republic of China today and what happened in Nazi Germany 75 years ago: People being forcibly loaded onto trains; beards of religious men being trimmed; women being sterilized; and the grim specter of concentration camps.”

The former chief rabbi, the late Lord Sacks, tweeted in a similar vein, while the Jewish News has twice run the Uyghur story on its front page — the only British newspaper to do so. The current chief rabbi, Ephraim Mirvis, spoke out two weeks ago in a powerful article in which he said it was “impossible” for him to keep silent.

In that context, for the pope’s Urbi et Orbi address to omit any mention of the Uyghur genocide — let alone Hong Kong in the year its freedoms have been dismantled at startling speed — brings shame on a pontiff who was elected just 10 days before I was received into the Catholic Church, and a pontiff whom in every other respect I admire.

Mind you, the archbishop of Canterbury is even worse. Unlike Pope Francis, he has not yet even mentioned the Uyghurs, let alone Christians in China. And he doesn’t even have a deal — or a flock — in China to defend. I’ll leave it to my Anglican friends to explain Archbishop Justin Welby’s sellout to the Chinese Communist Party.

A growing number of Catholic bishops and priests, notably Myanmar’s Cardinal Charles Bo and Indonesia’s Cardinal Ignatius Suharyo Hardjoatmodjo, who both signed a letter by 75 faith leaders about the Uyghurs this year, and several Anglican bishops, including Archbishop Welby’s predecessor Rowan Williams, are speaking out.

Their voices need now to resound in Rome and Canterbury and propel the world’s Christian leaders to do what they are supposed to do: speak truth to power, defend human dignity and liberty, and provide moral leadership: for God’s sake, literally.

*Benedict Rogers is a human rights activist and writer. He is the co-founder and chief executive of Hong Kong Watch, senior analyst for East Asia at the international human rights organisation CSW, co-founder and deputy chair of the UK Conservative Party Human Rights Commission, a member of the advisory group of the Inter-Parliamentary Alliance on China (IPAC) and a member of the advisory group of the Stop Uyghur Genocide campaign. The views expressed in this article are those of the author and do not necessarily reflect the official editorial position of UCA News.