The enduring global crisis is giving rise to fears that economic hard times will feed political extremism, as it did in the 1930s. This column suggests that the danger of political polarisation and extremism is greatest in countries with relatively recent histories of democracy, with existing right-wing extremist parties, and with electoral systems that create low hurdles to parliamentary representation of new parties. But above all, it is greatest where depressed economic conditions are allowed to persist.

The impact of the global crisis has been more than just economic.

All this gives rise to fears that economic hard times will feed political extremism, as it did in the 1930s.

Memories of the 1930s inform much contemporary political commentary, just as they have informed recent economic commentary (eg Mian et al 2010, Giuliano and Spilimbergo 2009). But how exactly did the interwar Depression and economic crisis affect political outcomes and the rise of right-wing anti-system parties? The question has not been systematically studied.

This led us to analyse the elections between WWI and WWII with respect to support for anti-system parties – defined as parties that explicitly advocate the overthrow of a country’s political system (de Bromhead et al 2012). We focus on right- rather than left-wing anti-system parties since it was right-wing parties that made visible and troubling electoral progress in the 1930s. And it is again right-wing extremist parties that have seemingly made the greatest gains in response to recent economic hard times (Fukayama 2012).

Explanations for political extremism in this period fall into five broad categories.

This line of argument features prominently in the literature on post-WWI Europe, where new nations were created with little regard for ethnic and religious considerations.

Lijphart (1994), for example, argued that the openness of the political system to new or small parties, whether due to the proportionality of the electoral system or to the effective threshold defined in terms of the share of total votes that a party had to attract in order to win parliamentary representation, was an important determinant of support for extremist parties.

The ‘civic culture’ which for these authors is a crucial ingredient of democratic stability is transmitted between generations in the household, in schools, and in the broader society, in part as a result of the exposure of people to the democratic system itself. More recently Persson and Tabellini (2009) have argued that countries with longer histories of democracy accumulate democratic capital, which increases the probability of continuing support for the prevailing party system. These analyses suggest that extremists could have benefitted more from the Depression in countries without a well-developed political tradition and poorly endowed with democratic capital.

Our data covers 171 elections in 28 countries between 1919 and 1939. While the sample is weighted towards Europe, since interwar elections were disproportionately European, we also include observations for North America, Latin America, Australia, and New Zealand (all elections for which we could obtain information). Anti-system parties are defined, following Sartori (1976), as parties that “would change, if it could, not the government, but the system of government”. Right-wing parties classified as anti-system range from obvious cases like the NSDAP in Germany to the Arrow Cross in Hungary and the Iron Guard in Romania.

Our major interest is the impact of the Depression on voting patterns and hence how voting shares changed after 1929. Our statistical results (see Annex for details) show that that the Depression was good for fascists. It was especially good for fascists in countries that had not enjoyed democracy before 1914; where fascist parties already had a parliamentary base; in countries on the losing side in WWI; and in countries that experienced boundary changes after 1918.

Since Germany ticks each of these boxes and saw a particularly large increase in the fascist vote, one may ask whether these interaction effects are driven by the German experience alone. The answer is that they are not.

Importantly, it shows that what mattered was not the current growth of the economy but cumulative growth or, more to the point, the depth of the cumulative recession. One year of contraction was not enough to significantly boost extremism, in other words, but a depression that persisted for years was.

The results stand up to the inclusion of control variables, including period dummies, the urbanisation rate, and the effective electoral threshold, and to alternative econometric specifications. In other regressions, we again find that the impact of poor growth was greater in countries where fascists were already represented in parliament and in countries with shorter histories of democracy. Our results are thus consistent with the claim of authors such as Almond and Verba (1989) that political culture mattered, and with the argument of Persson and Tabellini (2009) that countries with a longer history of democracy accumulate social and political capital that increases the probability that they will be able to resist threats to the prevailing political system.

Finally, we find that the electoral success of right-wing anti-system parties was shaped by the structure of the electoral system. A higher minimum share of the vote needed in order for a party to gain parliamentary representation made it more difficult for fringe parties to translate votes into seats and lowered fascist electoral gains.

Our analysis suggests that the danger of political polarisation and extremism is greater in some national circumstances than others. It is greatest in countries:

Above all, it is greatest where depressed economic conditions are allowed to persist.

Giuliano, P and A Spilimbergo (2009), “The long-lasting effects of the economic crisis”, VoxEU.org, 25 September.

Mian, A, A Sufi and F Trebbi (2012), “Political constraints in the aftermath of financial crises”, VoxEU.org, 21 February.

Table 1 presents the results of a series of difference-in-difference analyses in which voting shares are regressed on a post-1929 dummy, country characteristics (one per column), and the interaction between these two variables. In all regressions, the post-1929 dummy variable is positive, and it is usually statistically significant suggesting that depression boosted the electoral fortunes of anti-system parties. 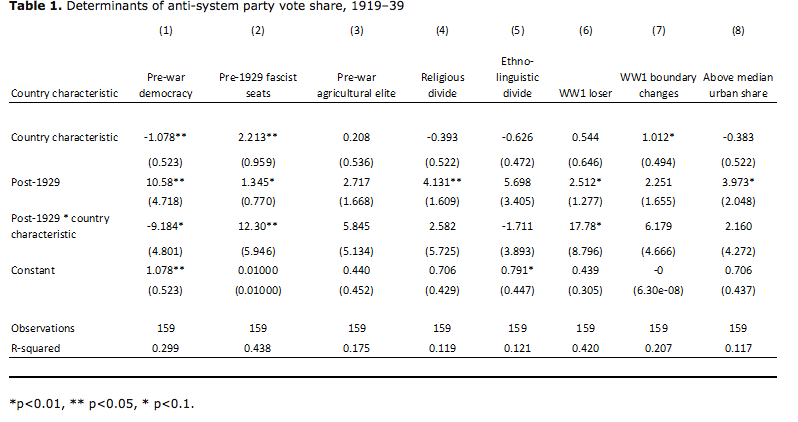