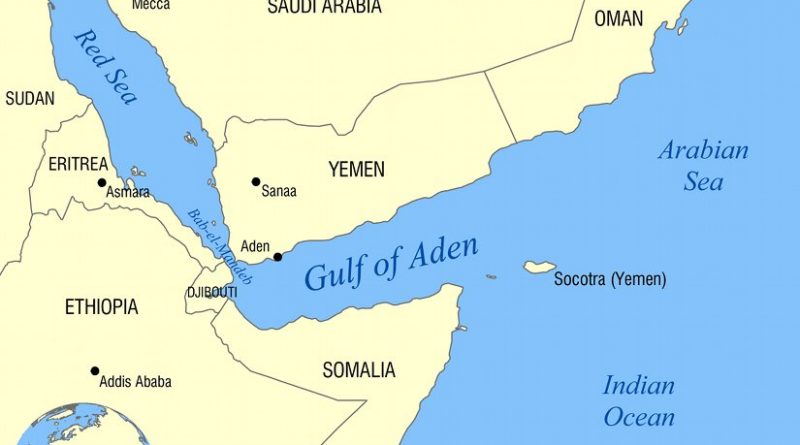 Operation “Decisive Storm”, which was conducted by Saudi Arabia against the Houthis in Yemen, constitutes a critical development for the Persian Gulf as Riyadh comes to perceive recent changes in its geography as cause for the emergence of long-term challenges in the region as a whole. From this point, the Yemen crisis reflects interactions with deep implications for regional and international relations stretching from the Asia-Pacific to the Gulf of Aden. These interactions will have negative ramifications for the Horn of Africa and the Dark Continent overall as the Gulf of Aden has become a hot spot in terms of conflicts involving various powers such as Iran, China, Japan, India, Turkey, NATO, and Russia. Thus, in order to better understand the international magnitude of the events in Yemen, it is necessary to elaborate on the essential advantages and maneuvers of the involved parties. Doing so will aid the overall observation of the course of developments, and may even facilitate predictions of the specific tactical and strategic goals held by the countries which declared support for Operation “Decisive Storm”.

Of the countries mentioned above, Japan has garnered increasing attention within this context, particularly in terms of its interests in Yemen, Djibouti, and the Gulf of Aden region in general. Further inspecting the fervor with which Japan has come to approach the region, in combination with the position of China, can allow us to formulate a better understanding of certain aspects of the crisis in the region. In this sense, Japan’s passage of a law in July 2015 that would allow for the Japan Self-Defense Forces to participate in military operations against foreign combatants is of particular importance. For Japan, such a step has been the first of its kind since the Second World War. Passed by the Japanese government, this law changed the way that the constitution is traditionally interpreted, thus allowing Japan to now participate in foreign defense operations.

The source of Japan’s concerns with regard to developments occurring around the Persian Gulf date back to the Iran-Iraq war period of the 1980s. During this time, some Japanese trade ships were exposed to bombardment and Japanese citizens were killed. The suggestion to send minesweepers to the region had not been accepted by the Japanese cabinet. Moreover, a demand to send a Japanese coast guard patrol had also been refused due to the fact that such would constitute a military operation. With the situation as it was, Tokyo did, however, provide financial support for the establishment of a reconnaissance system in the Gulf. In addition, Japan, which had not sent troops to the region in the First Gulf War, later provided 13 billion dollars’ worth of financial support to the war effort against Iraq’s occupation of Kuwait.

In 1992, Japan’s military role in the Gulf began to exhibit visible changes. Japan’s strategic vision, which largely focused on the struggle against China, expanded beyond the Asia-Pacific to include the Indian Ocean and the Arab region. Within this context, Japan decided to allow its “Self-Defense Forces” to be deployed abroad for the first time under strict conditions within the framework of UN peacekeeping missions; such was first exercised in Mozambique and the Golan Heights. Later, Tokyo participated in the international counter terrorism campaign alongside the United States, providing US forces with logistic support. Here, Japan participated in the Second Gulf War commenced by Washington in 2003, sending non-combatant troops. It is also particularly important to note that after the “(Nuclear) Proliferation Security Initiative” was declared under the leadership of the US in 2005, Japan began to monitor the security of seaways in the Indian Ocean.

Japan amid the challenges of ISIS and piracy in Somalia

After NATO sent troops to police piracy activities in the Gulf of Aden in 2008, the Japan Seamen’s Union concluded that Japanese ships were exposed to pirate attacks and thus set out to force the government to intervene. Ultimately, the government sent a military reconnaissance battalion to operate off the coasts of Yemen, Oman, Kenya, and Djibouti in December 2008. In April 2009, such action was taken one step further with Japan’s decision to establish military facilities in Djibouti to protect Japan’s ships from pirates; two destroyers and two fighter aircrafts were deployed to the region with the same purpose. Moreover, Japan later passed a law to protect its trade ships and to punish crimes of piracy. The law enabled Japanese powers to employ the use force against aggressive and suspicious ships regardless of their ensigns.

Since 2009, Japan has continued to develop its experience in the field of security in the Gulf of Aden with activities that it has carried out in Djibouti under the banner of the “fight against piracy”. However, since 2014 the country has begun to state its intention to expand its power in the region in a more explicit fashion. In May 2014, Japan’s Minister of Defense Itsunori Onodera requested that the government extend the authority of the Naval Base of Japan Self-Defense Forces which were temporarily assigned to Djibouti. After the request were approved, intelligence experts were sent to the region to gather information about terrorist activities and other security issues with the aim of preparing the temporary naval base in Djibouti to assume a more significant role in the region. Tokyo then indicated in January 2015 that it decided to establish a permanent military base in Djibouti. When we look through the statement regarding the establishment of this base, it is possible to say that this is the first time such an overseas policy was carried out by Japan since World War Two. After the ISIS threat came to a head in Iraq and Syria, with the group killing two Japanese hostages, Tokyo allocated 20 million dollars to those countries fighting against ISIS. Moreover, it declared in February 2015 that it would pursue the formation of a new treaty on foreign aid which would allow Japan to provide foreign powers with financial support for non-military purposes. Here, the Middle East has been an area of key importance in terms of the focus of the treaty in question.

Japan’s stronger military engagement abroad is intrinsically linked to the country’s rivalry with China. China’s influence in Africa and the Arab region has made Japan review its strategies in the region. In this sense, China attempts to use its economic power in order to establish security in this geography, which will work in its interest, while also working to improve military infrastructure. Japan, on the other hand, has to cooperate with regional powers in order to play a greater role in this geography, especially in the Gulf of Aden. Japan should obviously allot greater interest to Yemen due to the fact that it is the nearest spot to Japan’s military base in Djibouti.

In November 2013, Katsoboşi Hayaşi, Japan’s then Ambassador to Yemen, indicated in a meeting with Yemen’s Minister of Interior Abdulkadir Muhammed Kahran that Tokyo would support Yemen, emphasizing the development of cooperation between the two countries in the realm of security. Afterward, Japan saw yet again another “first” as it worked toward establishing a comprehensive bilateral cooperation mechanism and an extensive training program for the Djiboutian coast guard patrols that was implemented in August 2014. Before this, however, Saudi Arabia, which is well aware of the intimate connection between Yemen and its own maritime security, came to an agreement with Japan on engaging in cooperation on terrorism and maritime security during then Crown Prince Selman bin Abdülaziz’s visit to Japan in February 2014. Here, Tokyo came to support the Yemeni political process, under Saudi leadership, within the frame of the Gulf Enterprise, providing 113 million dollars thereto between 2012 and 2014.

Japan’s strategic role in Djibouti and its network of security relations with Yemen and the Gulf countries supplement its expansion efforts along major international trade routes and seaways off the coast of Africa. Considering this, Tokyo provided Kenya with 33 million dollars to be utilized in the fields of energy, shipping, counter terrorism, and intelligence cooperation in March 2015. Moreover, besides providing Mozambique with food aid and technical support, with an eye to the huge gas reserves that were discovered in the country, Japan signed a memorandum of understanding with Mozambique to promote cooperation in the field of energy in 2012. After Japan decided to phase out its nuclear power plants, it headed to this region in search of potential sources of energy. This region is now acknowledged as one of the most notable areas in which the rivalry between Japan and China is playing out, in part because of its advantageous ports. During the time when China commenced construction on certain parts of Lamu Port, which is in a strategically important position in the north Kenya, and began to integrate the port with infrastructure that would facilitate the shipment of energy resources from Ethiopia and Sudan, Japan declared in June 2014 that it would provide Mozambique with a grant and line of credit, which combined would amount to 232 million dollars, in order to rehabilitate the country’s Nacala Port.

In this vein, Japan has continued to strengthen its work in the region by fostering cooperation with coastal African countries. In August 2013, as a result of a new legislation, Japan opened military attaché offices within its embassies in Algeria, Morocco, Nigeria, South Africa, Djibouti, and Kenya. Earlier it had opened military attaché offices in Sudan, Egypt, Ethiopia, and Brazil in order to gather information about terrorist activities. It is also worth noting that the cooperation between Japan and several coastal African countries grew stronger after the formulation of the “2050 Africa’s Integrated Maritime Strategy”, which had been prepared by the Experts Committee of the African Union in 2012 and was ultimately adopted in 2014. Furthermore, the African Union’s declaration of the period between 2015 and 2025 as “the Decade of African Seas and Oceans” also proved to strengthen Japan’s options in developing its relations with coastal African countries. These options, however, have been related to association with international forces such as those of France, which started a joint venture with Japan focusing on the borders of Niger, Mali, and Burkina Faso, all of which signed a military and security treaty with the US, Australia, India, Great Britain, and then Japan in March 2015.

At this point, it is possible to state that China’s opposition to Operation “Decisive Storm” is related the US’s attempts to exclude it from various axes as well as the networks of cooperation among regional forces that function to do the same. In this way, it can be seen that China was excluded from the Pakistan-Afghanistan axis in the Near East as a result of cooperation between Iran and India. China is now worried that this exclusion could stretch to the Gulf of Aden and therewith prevent it from reaching the Mediterranean if Japan, or even Iran via the Houthis, comes to exert control over the Mandeb Strait between Djibouti and Yemen.

Home » Japan’s Interests Between The Gulf Of Aden, Africa And Yemen – Analysis

Japan, India And The World: The Significance Of Yoshihide Suga As Prime Minister – Analysis

By Dr Sandip Kumar Mishra* Prime Minister Shinzo Abe resigned from his post earlier this month due to health reasons;

Car Ploughs Through Crowd Of Pro-Trump Counter Protesters In California

Why Climate Change Is Back On The Agenda – OpEd