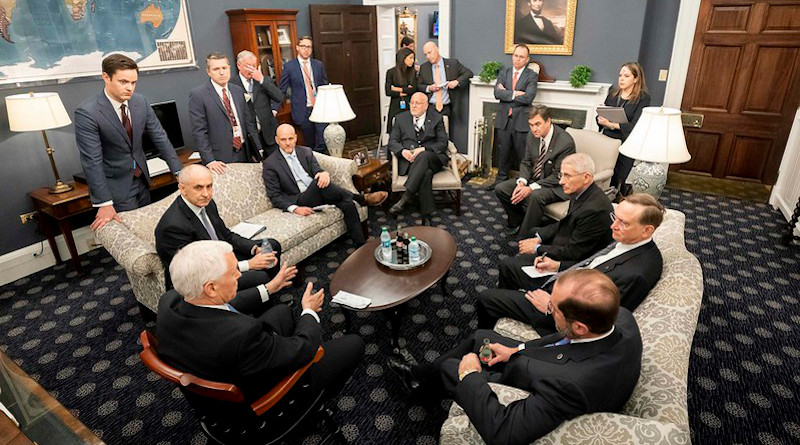 Donald Trump’s presidency is facing one of its biggest challenges from the spread of the new coronavirus, which threatens to infect the healthy U.S. economy.

Kudlow, who is a member of the administration’s newly formed coronavirus task force, said while there is currently no evidence of major supply chain disruptions, “that may be ahead of us.”

The Dow Jones Industrial Average is poised to record its worst weekly slide since the 2008 financial crisis.

Federal Reserve Chair Jerome Powell issued a statement while trading was still under way Friday afternoon stating that the central bank will use its tools and “act as appropriate to support the economy.”

Powell said the “fundamentals of the U.S. economy remain strong,” but “the coronavirus poses evolving risks to economic activity” and the Fed “is closely monitoring developments and their implications for the economic outlook.”

Trump has repeatedly complained the Fed has not been aggressive enough in cutting rates.

The Trump administration will invoke special powers through a law called the Defense Production Act (DPA) to rapidly expand domestic manufacturing to acquire 300 million N95 protective masks, as well as masks and gloves — all at an estimated cost of half a billion dollars.

“We intend to use (the DPA) to acquire anything we need to acquire. We won’t use it unnecessarily,” Health and Human Services Secretary Alex Azar told White House reporters at an off-camera briefing on Friday.

Earlier in the day, the acting White House chief of staff, Mick Mulvaney, blamed the media for exaggerating the seriousness of the coronavirus.

“They think this will bring down the president, that’s what this is all about,” Mulvaney said at the annual gathering of the Conservative Political Action Conference.

The president’s son, Donald Trump Jr., on Friday accused members of the Democratic Party of wanting the coronavirus to kill “millions of people,” which he told Fox News Channel is a “new level of sickness” by the opposition politicians.

Appearing on MSNBC, the lawmaker said: “I can assure you that there’s not a Democrat or Republican in Congress that wants anybody to be sick.”

Democratic leaders in Congress have harshly criticized the president’s response to the coronavirus outbreak.

“For Mick Mulvaney to suggest that Americans turn off their TVs and bury their heads in the sand when they’re worried about a global health pandemic is Orwellian, counterproductive, dangerous, and would be repeating China’s mistake,” said Senate Minority Leader Chuck Schumer in a statement.

House Speaker Nancy Pelosi is calling for “a well-coordinated, whole-of-government, fully-funded response” to keep Americans safe from the coronavirus threat.

Azar said that the Trump administration is requesting a total of one billion dollars to support development of a COVID-19 vaccine.

“The situation demands more support from Congress,” he said.

Administration officials say they want Trump to be able to sign a supplemental spending bill for funds to combat the coronavirus no later than the week after next.

The officials are rejecting criticism they had previously cut funds for the Centers for Disease Control’s budget on infectious diseases.

The acting director of the Office of Management and Budget, Russ Vought, calls such media reporting “flat out inaccurate.”

Globally there are more than 83,000 known cases of the viral disease, known as COVID-19, with nearly 2,900 reported deaths.

In the United States, there are more than 60 cases, including the first possible transmission of the coronavirus in the community — a woman in Northern California who is being treated at a hospital in Sacramento.

About half of the U.S. cases are passengers evacuated from the Diamond Princess cruise ship in Yokohama, Japan. The vessel had previously visited China, the source of the outbreak.

Hundreds of U.S. nationals have been repatriated from mainland China on State Department-chartered flights. They were then placed in 14-day quarantines on air bases in California.

A whistleblower complaint, according to media reports, alleges federal employees sent to military bases did not follow safety protocols while interacting with those individuals and the government workers subsequently were not tested for COVID-19 before departing the bases and then were sent home on commercial flights.

“We are fully investigating the allegations in the complaint,” Azar told reporters on Friday.