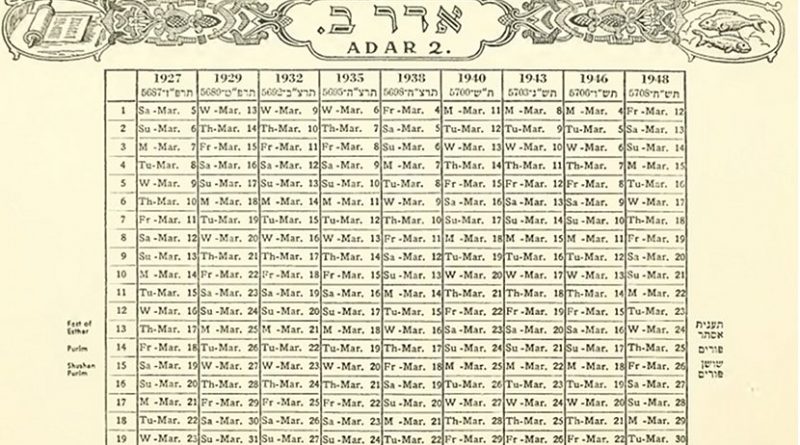 A few generations ago Jews began replacing A.D. [year of our Lord Jesus] with C.E. [common generic era]. Then Muslims, and academics in the disciplines of comparative religion and archeology, began using C.E. In our modern era, using CE, the common era, to stress a more universal, less theological, view of historical time, seems to be growing.

However, while a common non-sectarian calendar is very desirable, we can learn some valuable lessons from the differences in the Jewish, Christian and Muslim calendar systems.

All three religion’s calendars start each year on the same date in their own calendar, but since the Jewish and Muslim calendars are based on a lunar cycle, they move each year in terms of the Christian solar calendar.

In 638 CE, just six years after the death of Prophet Muhammad, and sixteen years after the Hijra, the escape of Muhammad and most of the Muslims, from oppression and persecution in the Arabian city of Makka, Islam’s second caliph, ‘Umar, decided to create a new calendar to govern the affairs of Muslims and the lands newly conquered by them.

These newly Arab conquered countries used several different calendars. Persia. Syria, Iraq, and Egypt all used a calendar with a different New Year date and a different historical era starting point; even though all four of them were solar calendars with 365 days.

An additional problem with the existing calendars for Muslims was that the solar calendars used by the Persians, Syrians, and Egyptians were identified with pagan cultures.

Umar, therefore, decided to create a calendar specifically for the Muslim community. It would be lunar only, as the Qur’an requires, with 12 months, each with 29 or 30 days. This gives a lunar year of 354 days, 11 days fewer than the solar year.

The Islamic lunar calendar did not need to be synchronized to the solar seasons because, unlike the Jewish calendar, no Islamic festivals are related to the agricultural cycle.

‘Umar also decided to choose a new starting date (epoch) for the new Muslim calendar: the Hijra, the escape of Muhammad from Makka to Medina, where Muslims first attained religious and political autonomy. Thus the Hijra, which occurred on the first day of Muharram was determined to be the year 1 for the Islamic calendar, which was named “Hijri” after its epoch.

The Persians like the Jews in the Biblical period, dated events by the year of the reigning king. But the Syrians and Iraqis both used the Seleucid era calendar, as did the Jews in post-Biblical days. The rabbis used the Seleucid calendar in divorce documents until the 8th or 9th century.

The Seleucid calendar started its epoch with the establishment of the Greek-dominated Syrian government, which in Syria, began in the autumn of 312 BCE, while in Iraq, the epoch began in the spring of 311 BCE, half a year later than in Syria.

In Egypt, the Christians used a calendar that started from 284 CE, when Diocletian became Roman emperor. This is very strange since Diocletian, in 303 and 304 CE, promulgated four anti-Christian laws which led to brutal repressions against Christians, especially in the eastern part of the empire.

The Egyptian Christians in later generations began to count their years from the beginning of the reign of Diocletian, their oppressor because they were proud that they had survived his oppression. This epoch is still used by Coptic Christians, who call it the ‘Era of Martyrs’.

In Europe, the Diocletian epoch was used until the 6th to 7th century. Then the epoch of the Christian Era, which was first used by Dionysius Exiguous in his calculations (in 525 CE) of past and future dates for Easter began to slowly spread. The Christian epoch starts with the birth of Jesus, placed in the year 1 CE. But it did not become widespread in Europe until the 9th to 10th century.

The second-century Rabbis who constructed the calendar Jews currently use chose to begin with Adam and Eve i.e. the beginning of written history and urban civilization. The word Adam in Hebrew means mankind or Homo Sapiens– the species.

The exit of Adam and Eve from the Garden of Eden symbolize the transition of humanity from a largely nomadic, stone age society of hunter-gatherers, to a more advanced metalworking bronze age society of farmers and village dwellers.

By starting the Jewish calendar with a historical transition that would eventually have a universal impact on all of human society, the second-century rabbis followed the lead of the Torah, which begins not with Judaism or the Jewish People, but with urban civilization and the recorded history of mankind.

All historical dates that are derived from written records will fit into the Jewish calendar. The earliest writing comes from the Mesopotamian city of Uruk (Genesis 10:10) and dates to about 5,500 years ago i.e. the third century of the Jewish calendar.

Abraham was not born until the 21st century of the Jewish calendar. It is only in the generations after Abraham that Biblical history begins to focus on the religious development of one specific people.

So let’s all keep our own religious calendar while sharing the common epoch calendar of CE.