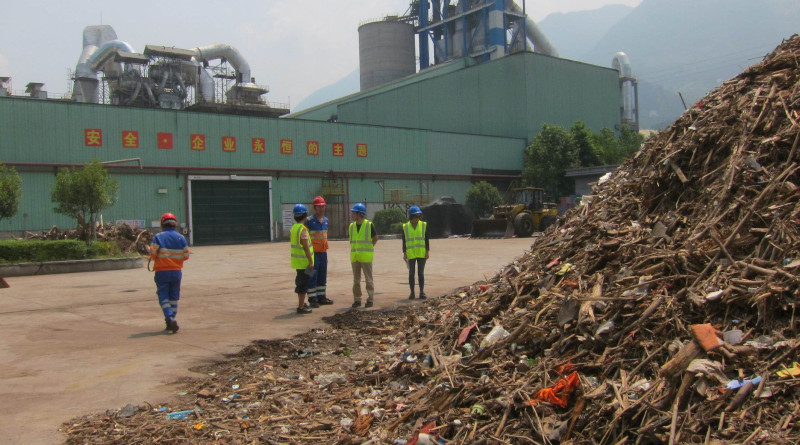 The landfill site at Nakon Nayok in Thailand contains 42 percent plastic. There are 2,500 such sites in Thailand together containing 190 million tons of accumulated plastic waste. Photo: SINTEF

Researchers believe that plastic refuse can be used as fuel in cement factories in Asia. If this works, it may provide a solution to two of the planet’s biggest environmental problems – plastic in the oceans and high levels of coal consumption.

Hope in the midst of crisis. Overflowing landfill sites in Asia may prove to be goldmines for local cement producers. So say researchers at the Norwegian resarch organisation, SINTEF, who have extensive experience with the same concept in China.

Plastic is made from fossil fuels and contains more energy than coal. Substituting industrial coal consumption with non-recyclable plastic enables us to resolve two problems. The plastic will not end up in landfill or in the sea, and we will reduce levels of coal consumption and thus also CO2emissions. It’s a win-win opportunity.

Approximately 6.3 billion tons of plastic refuse was produced globally up until 2015. Of this, only 9 percent was recycled, while 12 percent was incinerated and 79 percent was dumped in landfill sites.

If this trend continues, in 2050 we will have accumulated 12 billion tons of plastic refuse, of which a large proportion may end up as microplastic pollution in the oceans.

China is now investing heavily in the use of plastic waste as a fuel in the cement industry, and it was Norwegian researchers that first suggested the idea. The aim of the project OPTOCE (Ocean Plastic Turned into an Opportunity in Circular Economy) is to assist a number of Asian countries to be rid of their landfill sites and at the same time reduce their coal consumption.

“The country has boosted its waste management capacity and reduced its consumption of coal. The use of refuse as an energy source is thus now one of the key strategies in Chinese waste management policy.”

Half the world’s plastic

China, India, Thailand, Vietnam and Myanmar are together home to three billion people – about half of the world’s population. The greater part of the plastic and plastic refuse in the world also originates from these countries. China alone accounts for almost a third of the world’s production of plastics.

As well as the plastic they use themselves, these countries also receive large volumes of plastic waste from Europe. Plastic collected in Norway is sent to Germany and that which cannot be recycled – that is, most of it – is often exported onwards to Asia. Unfortunately, this is because only a small proportion of our plastic refuse can be recycled. This may be because it has either already been recycled several times, or because it contains additives that mean it requires more energy to recycle than we obtain from its re-use. So it ends up as refuse.

The standards of living and levels of consumption in the five Asian countries have increased rapidly in recent years, but the effectiveness of their waste management policies has failed to keep up. They simply cannot get rid of their refuse, which accumulates in great landfill sites. Much of it ends up in the sea, where the plastic can do a great deal of harm.

“When the plastic ultimately ends up as microplastic in the oceans it becomes difficult to remove, so by far the best strategy is to prevent it from entering the marine environment in the first place”, says SINTEF’s Senior Research Scientist Kåre Helge Karstensen, who is heading the OPTOCE project. The aim of the project is to assist the authorities in these Asian countries to get rid of their landfill sites before the refuse ends up in the oceans.

So where are they going to put all this non-recyclable plastic? Can it be put to any useful purpose? This is where the cement industry enters the stage. The same countries that discharge the greatest volumes of plastic into the oceans also account for two thirds of the world’s cement production. Fifty-eight percent of all cement is manufactured in China.

Half a billion tons of coal

Cement is manufactured by heating limestone until it becomes liquid in a process called calcination. This process currently takes place in large furnaces at temperatures of 1,450 degrees Celsius. This requires enormous amounts of fuel, which for the most part is coal. Cement factories across the world are currently burning half a billion tons of coal every year.

The massive emissions of CO2 this entails, combined with the calcination process itself, make the industry a serious contributor to climate change. If some of this coal is replaced by non-recyclable plastic we will achieve a two-fold benefit. We will be rid of the landfill sites and at the same time reduce CO2 emissions.

There is nothing new in the idea of using refuse as a fuel in cement production. It was during the oil crisis of 1973 that cement manufacturers in the USA started looking for alternative fuel sources. They discovered that refuse could substitute for much of the fossil fuels they were using.

Norcem’s cement factory in Brevik in Porsgrunn started using refuse as a fuel in the 1980s. SINTEF and Kåre Helge Karstensen participated as a research partner in this process right from the start, and ever since, Karstensen, who is a qualified chemist, has been working to bring the concept developed by his group to the global cement industry.

In Europe today, it is standard practice to use refuse as a fuel in the manufacture of cement. The facility at Brevik substitutes 75 percent of what would be coal consumption with refuse. In doing so, it is able to utilise 150,000 tons of waste, including plastic, every year. The aim is eventually to stop using coal altogether.

Many years of collaboration

When in 2018, the Norwegian government delegated the Ministry of Foreign Affairs with the task of establishing a foreign aid programme to prevent plastic pollution in the oceans, the Ministry contacted Karstensen at SINTEF.

He had been working with waste management processes in China since 2005 and was the person who introduced the public authorities to the idea of using waste as a source of energy.

“At that time, the concept was entirely unknown in China”, says Karstensen. “The authorities were sceptical, but at the same time interested in the concept”, he says.

SINTEF took on a facilitation and problem-solving role in an attempt to establish collaboration between local industries and the authorities. Naturally, at first, the industry was unwilling to share commercial secrets with its competitors.

“However, many years of collaboration have enabled us to establish high levels of trust within the industry, and we have persuaded all parties to participate in the development and sharing of concepts that could be profitable for all concerned”, Karstensen says.

The utilisation of refuse as fuel has become a key aspect of waste management policy in China, and the industry has recognised the economic benefit.

“The country has boosted its waste management capacity and reduced its consumption of coal. The use of refuse as an energy source is thus now one of the key strategies in Chinese waste management policy”, says Karstensen.

This is the circular economy in practice. When refuse can be exploited as a resource in industrial processes, the world will need fewer incinerators and landfill sites.

The objective of the OPTOCE project is to bring this work forward with a view to removing landfill sites entirely and prevent refuse from ending up in the oceans.

Many countries in Asia are now utilising refuse as an energy source, although still to a much lesser extent than in Europe. To date, only three percent of coal consumption has been replaced by alternative fuels.

“The potential is enormous”, says Karstensen. “However, even if the cement factories of Asia can burn as much as 160 million tons of plastic refuse each year, they will still only be replacing between 10 and 15 percent of their industrial coal consumption”, he says.

Much of the work completed to date has been dedicated to persuading the industry and the authorities in these countries to invest in the use of plastic as a fuel.

“Of course we know that this is feasible, so now we intend to show them that it can work in their cement production sectors and that the process is profitable”, says Karstensen. “It is crucial that both the industry itself and the authorities recognise the opportunities made available by the use of plastic refuse. We are paying no-one to participate in this project. We now have cement factories in China, India, Thailand, Vietnam and Myanmar taking part in the project. All of them are testing the use of plastic as a fuel. All that remains is to document the environmental and commercial benefits”, he says.

The pilot projects were all planned to have been implemented by now, but the cement factories have suspended operations due to the coronavirus outbreak.

“We are in close dialogue with the factories and local research institutes and universities”, says Karstensen. “I’m sure that the authorities will ensure that production will be resumed as soon as possible. These are maturing economies that have to build hospitals, roads and other major infrastructure. They will be needing a lot of cement”, he says.

Here are the pilot projects: