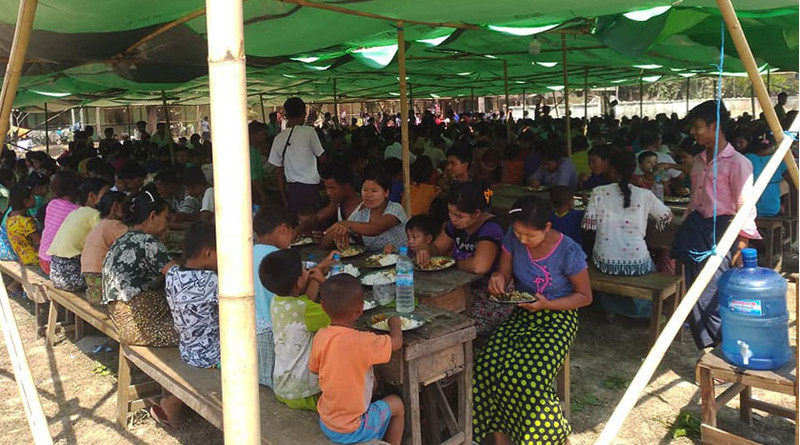 Internally displaced people (IDPs) who are sheltering at schools may soon face troubles with their living arrangements as it is likely that the schools will reopen in June, said U Oo Tun Win, the Pyithu Hluttaw lawmaker for Arakan State’s Kyauktaw Township.

Around 3,000 IDPs are staying at schools in Kyauktaw town, including more than 2,300 people at two high schools in the town and a few hundred more at Kyauktaw primary schools.

U Oo Tun Win said those IDPs would need to move out when the schools reopen and that it would be difficult to accommodate them at the displacement camps set up in Kyauktaw town because they are already crowded with other IDPs.

“We don’t have an answer yet as to how we can accommodate the IDPs when the rainy season comes,” he acknowledged.

The Myoma high school “camp” official U Maung Win said they had asked the township administration office to construct temporary settlements for IDPs to live in during the monsoon season.

“They submitted our proposal to the higher level. They said that they will arrange for land so that the IDPs can stay there temporarily. But, we don’t yet know when it will happen,” he said.

U Khaing Kaung San, director of the Wan Lark Foundation, said shelters in some IDP camps don’t have proper roofs and walls, adding that the government should provide assistance to fortify these dwellings before the rainy season settles in.

“Schools will be opened in June. That’s why the government should arrange the camps systematically. If the government doesn’t have the money, it should accept assistance from international donors,” he said.

Since December 2018, fighting between the Arakan Army and the Tatmadaw has displaced more than 150,000 people, many of whom struggle to meet basic needs such as food, shelter and clothing.