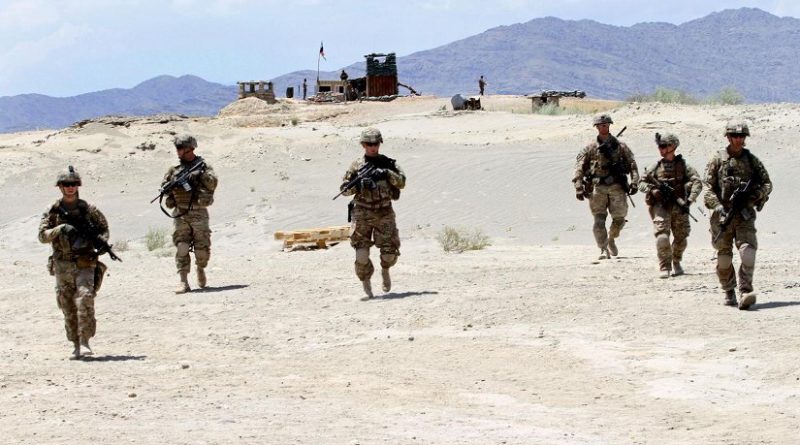 US Army soldiers take part in a training exercise on Tactical Base Gamberi in eastern Afghanistan. Credit: US Department of Defense

On December 28, 2014, the US and NATO formally declared an end to the Afghan war despite an ongoing insurgency. Nevertheless, a treaty was signed by the US to allow for the retention of some troops to serve in an advisory and counter-terrorism role.

The reassignment in role began a new phase of the war in which the Afghan forces would lead the fight. Since then, the Afghan government has found itself inept and incapable in defending the country despite more than 14 years of training by foreign forces.

President Obama has recently become more active in Afghanistan despite vowing to end the war during his presidential candidacy. First, the newly elected leader of the Taliban was killed by a drone strike and recently, President Obama announced a more involved role for US forces in the country. While many believed the US was slowly withdrawing from the longest war in its history, it appears to be back in the fight. The situation in Afghanistan is as precarious as ever, with the presence of ISIS in parts of the country coupled with a raging Taliban insurgency, the US objective has never been bleaker in the region. It is clear; the Afghan government is incapable of restraining the Taliban militarily or integrating them politically, without the US presence the Afghan government will fall quickly. On the other hand, the US cannot perpetually sit in Afghanistan to fight the Taliban because neither time nor money is on their side.

The Afghan government’s composition makes it inherently incapable of ever being able to take on the Taliban on its own. The government is an ironic web of warlords, criminals, technocrats, and fanatics that are swathed together by the US Dollar. The US finds itself in a true quagmire; it cannot stay forever nor withdraw anytime soon, so what to do?

President Obama recently traveled to Vietnam to fully normalize relations with a former enemy. Despite fighting a long drawn out war, the US and Vietnam find itself today working together to help contain a larger regional threat, China. The possibility of the US military going back to the country appears more plausible as each day goes by, but not as an invader but rather ally. What can the improved ties between the US and Vietnam teach Americans about its current war in Afghanistan? On occasion, losing a battle can lead to a greater victory in the long run if a nation’s strategic interests are viewed through a non-myopic lens. While the US attempts to preserve a fledgling regime in Afghanistan comprised of people as worse as the Taliban, it should not allow the current situation to blind its strategic ambitions for the region. Similar to Vietnam, once the US is fully withdrawn from the area, whether sooner or later, the Afghan government will collapse and the country will resume the civil war it was fighting before the American intervention. With the exception that the Taliban are much stronger now, while the former Northern Alliance network is essentially eliminated since many of its former leaders have been killed. It would behoove the US to negotiate with the Taliban directly rather than carry on an expensive and futile war.

Vietnam and the South China Sea

Due to nationalistic and ideological hubris, the US isolated Vietnam while the Cold War continued on. After the fall of the Soviet Union, Vietnam’s largest patron, relations with the US began to warm up. President Clinton recognized the country and President Bush normalized them. President Obama’s recent visit to Vietnam came with the lifting of the arms embargo, finalizing the full recognition process. The improved relationship was not due to humanitarian concerns but rather geopolitical. The fear of a rising China has created an opportunity for both Vietnam and the US to restore ties. Both countries see a mutual interest in working with each other in containing the Chinese expansion in the South China Sea. The decades long freeze in relations could have been avoided if American planners better understood the local dynamics among the regional nations.

After the US withdrew from Vietnam in 1975, the unpopular US-backed government of South Vietnam fell to the invading North Vietnamese forces. Despite losing the war, the US global clout allowed it to isolate Vietnam from most of the world. What the US ignored was Vietnam and China’s centuries of animosity trumped their provisional wartime alliance, which erupted into another war due to North Vietnam’s intervention in Pol Pot’s Cambodia. Nevertheless, the US continued to neglect Vietnam for another decade.

As the Cold War came to an end, China began to emerge as a long-term threat to American regional interests in the Pacific. Vietnam and the US fearing a more assertive China looked to each other for help. In particular, Vietnam’s Cam Rahn Bay offers a deep water port, perfect for larger naval ships. The rise of China offered both nations a quid pro quo situation in terms of military cooperation and even an alliance.

Afghanistan and the Lessons of Vietnam

When the US invaded Afghanistan in 2001, it had done so on the basis of destroying Al Qaeda’s terror network along with removing the Taliban from power for providing such havens. After successfully deposing the Taliban regime, the US put together an Afghan government that was unfortunately comprised of corrupt warlords and criminals similar to Diem’s government in South Vietnam. These warlords were the same murderous bandits that were once chased out by the Taliban to the delight of the people in Afghanistan. Shortly thereafter, the Taliban’s true nature was demonstrated through their extreme and misogynistic rule.

The US’s next misstep was before fully defeating the Taliban; there was a focus shift to Iraq. As the US began to become bogged down there, the Taliban regrouped and began to win popular support while the Afghan government was losing it due to corruption. The success of any insurgency resides with the local population. Despite a military surge by President Obama, the war has gone on to become the longest in US history and the end doesn’t appear to be anywhere near. So what will happen after the US withdraws?

The most likely event after a complete US withdrawal from the region is that the government in Kabul will disintegrate along ethnic lines and a small pitch civil war will be fought. Due to the state of the war in the past 14 years, the Taliban have been able to structure, plan, and organize the insurgency to be a proper fighting force. Any pockets of resistance in a civil war would be short-lived due to the lack of any cohesion or leadership amongst any type of opposition to the Taliban. Without any troops in the fight, the US will condemn the Taliban but nothing more than sanctions and verbal condemnation. This situation provides an opportunity to learn from previous conflicts such as Vietnam.

The US needs to be fully cognizant that the fragile Afghan government it has spent billions in treasures and blood to prop up, can never move forward with the mantle of democracy that it was designed for because of the politicians that were instituted to run it. Many that wield power in the Afghan government are illiterate, leave alone fluent in the understanding the concepts involved in running a Democratic government. The US needs to begin direct negotiations with the Taliban without any preconditions. It should then withdraw from the region on an understanding that the Taliban will not revert back to its old ways but instead renounce terrorism, ensure equality for women and minorities, as well as not become an oppressive regime again. If the Taliban are meant to ascend to power, the US should, albeit with certain boundaries, embrace it as long as it works to its interests. The US needs to ensure the situation with Afghanistan is stable to ensure its regional strategic interests are secured. Retaining an ally country can serve the US very well in the region similar to how Vietnam is now unfolding with respect to China. Afghanistan is geographically situated in a strategically imperative location; Iran to the West, Central Asia and Russia to the North, Pakistan to the South, and China to the East.

The Iranian expansion in the Middle East is becoming a threat to US interests in the region. Potentially the only way to stop the Persian flood is with a polar opposite government at its border. While the Shiite Mullahs rule Tehran, Kabul’s Sunni Mullahs can damper Persian regional ambitions. Despite being nominal allies in the current war, like China and Vietnam, the Iranians and Taliban have a turbulent history. Simultaneously, as Russia continues to exercise its power in Eastern Europe, it’s looking to Central Asia to reestablish its foothold there. Once again the Taliban and Russia do not see each in other in the best of light due to their tumultuous dealings in the past. China has been somewhat neutral with respect to the Taliban prior to 9/11 and desires a stable region no matter who is in power. Yet, the Chinese were apprehensive of the Taliban influence on the Uighur population in its volatile Xinjiang Province, who want an independent state. Finally, the Pakistanis in the south have been the Taliban’s main patron and ally since the formation of the group in the early 1990s. The instability in Pakistan creates more complication in an already intricate web of regional politics. An understanding between the Taliban and the US can create the necessary environment for the group to wean away from its reliance on the Pakistani government. If the US carries out similar diplomatic relations with the group as it does with Vietnam now, Afghanistan can end up being more strategically valuable then Vietnam for American interests even with the Taliban in power.

About the author:
*Luis Durani is currently employed in the oil and gas industry. He previously worked in the nuclear energy industry. He has a M.A. in international affairs with a focus on Chinese foreign policy and the South China Sea, MBA, M.S. in nuclear engineering, B.S. in mechanical engineering and B.A. in political science. He is also author of “Afghanistan: It’s No Nebraska – How to do Deal with a Tribal State” and “China and the South China Sea: The Emergence of the Huaqing Doctrine.” Follow him for other articles on Instagram: @Luis_Durani