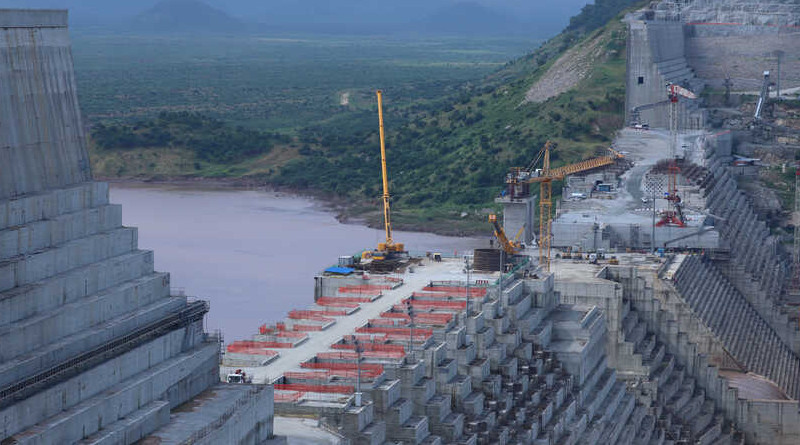 The giant Grand Ethiopian Renaissance Dam that Ethiopia is building on the Blue Nile in September 2019. Photo Credit: VOA

After nine years of negotiations, time is running out to find a compromise on the Grand Ethiopian Renaissance Dam.

The bitter dispute among Ethiopia, Egypt and Sudan over the giant Grand Ethiopian Renaissance Dam that Ethiopia is building on the Blue Nile seems like the classic case of an irresistible force meeting an immovable object.

The three countries have been haggling for nine years since construction began and last week round 12 of the latest chapter of negotiations also deadlocked. Those talks began in November 2019 and were brokered by the United States (US) and the World Bank.

Ethiopia is now set to start filling the already 76%-complete dam unilaterally in a few weeks when the annual rains come, which could raise tensions to breaking point. Egypt, which has vowed to use ‘all means available’ to secure its water supply, has referred the dispute to the United Nations (UN) Security Council. It says, rather ominously, that the dispute is likely to endanger international peace and security.

It is undoubtedly a tough dispute. Egypt depends on the waters of the Blue Nile for about 82% of its water needs and fears that the big dam – which will eventually impound an immense 74 billion cubic metres of water – will choke off much of that supply.

Ethiopia, by contrast, insists it has natural rights over the use of the Nile to uplift its people from poverty and spur economic growth. It needs the dam’s 16 turbines to generate the hydroelectric power – about six gigawatts of it – to provide electricity to the over 65 million Ethiopians who now lack it, as Ethiopian Foreign Affairs Minister Gedu Andargachew told the UN Security Council last month.

Sudan is very much the third party to this dispute and has oscillated between the two chief protagonists. It can see the benefits of the dam, mainly to buy electricity, but has concerns about safety as the dam is very close to its border.

Despite the acrimony, a lot has in fact been achieved in the negotiations so far. The parties have agreed on how Ethiopia should fill the dam, and how much water it would release when there is sufficient rainfall. Ethiopia has also agreed to release predetermined amounts of water – depending on the dam level and Blue Nile inflow into the reservoir, even in drought years.

But Egypt – backed by the US – wants extra commitments of water from Addis Ababa in multi-year droughts of four or five years. And it wants Ethiopia to compensate Egypt and Sudan after long droughts have passed by releasing extra water to make up for the reduced flows during the droughts. That’s been a bridge too far.

Ethiopia says releasing so much water would lower the dam to levels where its turbines could not generate enough power. Egypt’s ambassador to South Africa, Sherif Issa, told ISS Today last week that the World Bank had calculated that even in the worst drought, Ethiopia could still generate at least 70% of electrical capacity.

‘We need to know how much water we will get in the future so we can plan our cultivation,’ he says, noting that Egypt uses some 86% of its Nile waters for agriculture. But Ethiopia resents the suggestion that by having to compensate for reduced water flow during drought it would find itself ‘owing’ water to the two downstream countries.

Due to time constraints, Ethiopia’s ambassador to South Africa, Dr Shiferaw Menbacho, was unable to respond to ISS Today’s requests for comment. In his letter to the UN Security Council, Andargachew wrote that Egypt’s insistence on its ‘current water uses’ as the baseline for calculating water impacts ‘is built on colonial-based treaties (1929 and 1959) to which Ethiopia is not a party.’

‘By seeking to protect the unjust “status-quo” on the Nile Basin, Egypt is essentially preventing any water use by other riparian countries,’ Andargachew argued. In any case, he says, Egypt’s own Aswan High Dam has proved capable of providing enough water for the country’s agricultural and industrial needs, even in drought years.

The other main outstanding issue from the negotiations is that Egypt wants dispute resolution mechanisms to be settled by binding international arbitration. Ethiopia insists on a looser arrangement where disputes would be settled as they arise through negotiations among the three countries only, as provided for in the 2015 Declaration of Principles on the dam signed by the heads of government of the three countries.

Issa says Ethiopia is basing its position on its absolute sovereign right to determine how the dam and its water should be managed. ‘But sovereignty is not absolute when you are talking about a cross-border water source.’

And he says Ethiopia’s insistence on the right to begin filling the dam probably within weeks or days – with or without an overall agreement with the downstream countries on how the water will be released – would violate the Declaration of Principles. Andargachew has rejected that interpretation of the declaration, which he says states that the first filling of the dam will be carried out in parallel with construction. ‘Hence, the filling of the dam is part of the construction.’

Is a compromise possible between such apparently intractable positions? Will Davison, Senior Analyst on Ethiopia at the International Crisis Group, has a proposal. Egypt could ease its demand for how much water Ethiopia would discharge in the case of a multi-year dry period.

And Ethiopia could be maximally generous in its offer to release predictable volumes of water from the dam’s storage during drought. It could also propose how Sudan and Egypt’s reservoirs can share the burden of mitigating any sustained period of below average flows. Meanwhile, Egypt should accept that Ethiopia has the right to develop Blue Nile projects upstream of the GERD that would reduce inflows into the dam.

As the Institute for Security Studies proposed earlier this year, this seems like a dispute the African Union (AU) should become more involved in. The discord is aggravating relations among three key AU members to dangerous levels, even threatening conflict. The continental body, through its political leadership and organs such as the Peace and Security Council and African Imminent Panel of the Wise, should proactively engage the parties to de-escalate tensions and build confidence between the Egypt and Ethiopia.

So far the AU seems only engaged to the extent that South Africa has been observing the negotiations, in its capacity as 2020 AU chair. But a substantial role for the continental body – preferably one which eventually puts the dam in the context of a wider regional development plan for the Nile – could help defuse the conflict in the longer term.

Meanwhile though, the rains are coming and the dam water levels – and tensions – will soon begin to rise. Solutions that work for all parties must be found, and quickly.