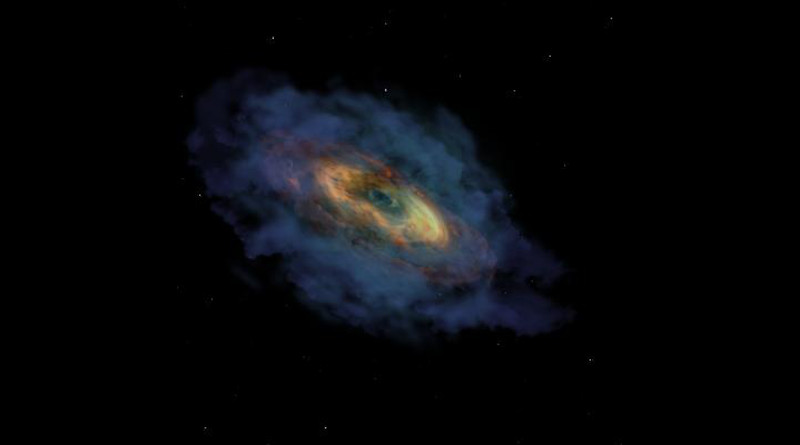 An artist's impression of the formation of quasar Pōniuā`ena, starting with a seed black hole, 100 million years after the Big Bang. Credit: International Gemini Observatory/NOIRLab/NSF/AURA/P. Marenfeld

Astronomers have discovered the second-most distant quasar ever found using three Maunakea Observatories in Hawai’i: W. M. Keck Observatory, the international Gemini Observatory, a Program of NSF’s NOIRLab, and the University of Hawai’i-owned United Kingdom Infrared Telescope (UKIRT). It is the first quasar to receive an indigenous Hawaiian name, Pōniuā`ena, which means “unseen spinning source of creation, surrounded with brilliance” in the Hawaiian language.

Pōniuā`ena is only the second quasar yet detected at a distance calculated at a cosmological redshift greater than 7.5 and it hosts a black hole twice as large as the other quasar known in the same era. The existence of these massive black holes at such early times challenges current theories of how supermassive black holes formed and grew in the young universe.

The research has been accepted in the Astrophysical Journal Letters and is available in preprint format on arXiv.org.

Quasars are the most energetic objects in the universe powered by their supermassive black holes and since their discovery, astronomers have been keen to determine when they first appeared in our cosmic history. By systematically searching for these rare objects in wide-area sky surveys, astronomers discovered the most distant quasar (named J1342+0928) in 2018 and now the second-most distant, Pōniuā`ena (or J1007+2115, at redshift 7.515). The light seen from Pōniuā`ena traveled through space for over 13 billion years since leaving the quasar just 700 million years after the Big Bang.

Pōniuā`ena is the most distant object known in the universe hosting a black hole exceeding one billion solar masses,” said Jinyi Yang, a postdoctoral research associate at the Steward Observatory of the University of Arizona and lead author of the study.

For a black hole of this size to form this early in the universe, it would need to start as a 10,000 solar mass “seed” black hole about 100 million years after the Big Bang, rather than growing from a much smaller black hole formed by the collapse of a single star.

“How can the universe produce such a massive black hole so early in its history?” said Xiaohui Fan, Regents’ professor and associate department head of the Department of Astronomy at the University of Arizona. “This discovery presents the biggest challenge yet for the theory of black hole formation and growth in the early universe.”

Current theory holds the birth of stars and galaxies as we know them started during the Epoch of Reionization, beginning about 400 million years after the Big Bang. The growth of the first giant black holes is thought to have occurred during that same era in the universe’s history.

“Pōniuā`ena acts like a cosmic lighthouse. As its light travels the long journey towards Earth, its spectrum is altered by diffuse gas in the intergalactic medium which allowed us to pinpoint when the Epoch of Reionization occurred,” said co-author Joseph Hennawi, a professor in the Department of Physics at the University of California, Santa Barbara.

Yang’s team first detected Pōniuā`ena as a possible quasar after combing through large area surveys such as the UKIRT Hemisphere Survey and data from the University of Hawai’i Institute for Astronomy’s Pan-STARRS1 telescope on the Island of Maui.

In 2019, the researchers observed the object using Gemini Observatory’s GNIRS instrument as well as Keck Observatory’s Near Infrared Echellette Spectrograph (NIRES) to confirm the existence of Pōniuā`ena.

“The preliminary data from Gemini suggested this was likely to be an important discovery. Our team had observing time scheduled at Keck just a few weeks later, perfectly timed to observe the new quasar using Keck’s NIRES spectrograph in order to confirm its extremely high redshift and measure the mass of its black hole,” said co-author Aaron Barth, a professor in the Department of Physics and Astronomy at the University of California, Irvine.

In honor of its discovery from atop Maunakea, 30 Hawaiian immersion school teachers named the quasar Pōniuā`ena through the ‘Imiloa Astronomy Center of Hawai’i’s A Hua He Inoa program led by renowned Hawaiian language expert Dr. Larry Kimura.

“We recognize there are different ways of knowing the universe,” said John O’Meara, chief scientist at Keck Observatory. “Pōniuā`ena is a wonderful example of interconnectedness between science and culture, with shared appreciation for how different knowledge systems enrich each other.”

“I am extremely grateful to be a part of this educational experience – it is a rare learning opportunity,” said Kau’i Kaina, a high school Hawaiian immersion teacher from Kahuku, O’ahu who was involved in the naming workshop. “Today it is relevant to apply these cultural values in order to further the well-being of the Hawaiian language beyond ordinary contexts such as in school, but also to ensure the language lives throughout the universe.”

The Near Infrared Echellette Spectrograph (NIRES) is a prism cross-dispersed near-infrared spectrograph built at the California Institute of Technology by a team led by Chief Instrument Scientist Keith Matthews and Prof. Tom Soifer. Commissioned in 2018, NIRES covers a large wavelength range at moderate spectral resolution for use on the Keck II telescope and observes extremely faint red objects found with the Spitzer and WISE infrared space telescopes, as well as brown dwarfs, high-redshift galaxies, and quasars. Support for this technology was generously provided by the Mt. Cuba Astronomical Foundation.

The W. M. Keck Observatory telescopes are among the most scientifically productive on Earth. The two 10-meter optical/infrared telescopes on the summit of Maunakea on the Island of Hawai’i feature a suite of advanced instruments including imagers, multi-object spectrographs, high-resolution spectrographs, integral-field spectrometers, and world-leading laser guide star adaptive optics systems.

Some of the data presented herein were obtained at Keck Observatory, which is a private 501(c) 3 non-profit organization operated as a scientific partnership among the California Institute of Technology, the University of California, and the National Aeronautics and Space Administration. The Observatory was made possible by the generous financial support of the W. M. Keck Foundation.

The authors wish to recognize and acknowledge the very significant cultural role and reverence that the summit of Maunakea has always had within the Native Hawaiian community. We are most fortunate to have the opportunity to conduct observations from this mountain.