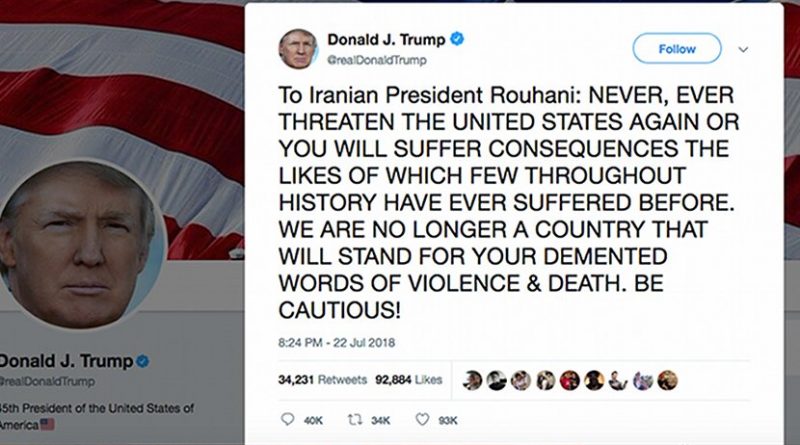 US President Donald Trump responds to Iran via Twitter.

Two months after the United States withdrew from the Joint Comprehensive Plan of Action (JCPOA), the leaders of the United States and Iran exchanged hostile rhetoric on Twitter. But on Tuesday, Trump signaled that a new deal is possible. As we have seen throughout Trump’s tenure in office, it is not unusual to see conflicting messages from the White House on international issues. The pressure set out by the Trump Administration on Iran is timely because Washington will slap financial sanctions on Tehran beginning in August and cut its energy exports by November.

In his speech at the Veterans of Foreign Wars (VFW) Convention in Washington D.C, President Trump hinted at pushing for another deal with Iran, except that the agreement would be under his signature and not that of his predecessor. The Trump Administration withdrew from the JCPOA because even though the deal curtailed Iran’s ambitions for nuclear weapons, it did not address other American concerns like regional activities and ballistic missile development. In addition, the administration has been open to negotiating a new deal with the Europeans, but it is unlikely that Tehran would accept a new deal now that the U.S nixed the JCPOA. The Russians, Chinese, and Europeans want to keep the deal in place, although, Washington will make it very difficult because they won’t give exemptions to global companies who want to conduct business in Iran through the international financial system.

Over the last few days, the rhetoric between the U.S and Iran has increased. This is mainly because there has been rhetorical pressure coming out of Washington calling for regime change, intervening militarily, and bringing crude oil exports down to zero. In a response to Rouhani’s comments, President Trump lashed out at the Iranian President on Twitter in upper-case letters to never ever threaten the United States again or suffer the consequences. This provocative rhetoric has European allies worried, along with people in the Middle East, China, and Russia worried as well.

So far, Trump’s twitter spat with Iran has gone nowhere, and it won’t go anywhere anytime soon. Even if President Trump had the intent to come to the negotiating table, it would be very difficult for the administration to pivot back to diplomacy. The ‘fire and fury’ from the Trump Administration on Iran sounds similar to that of North Korea but has divergent contrasts. In the North Korea case, the allies and adversaries of the United States welcomed diplomacy with the DPRK, but in the Iran case, partners in the region like Israel and Saudi Arabia have opposed diplomacy and favored a more aggressive approach towards Iran. Second, North Korea is a one-man show and Kim Jong-Un has the flexibility to turn on a dime where he calls all the shots with no political opposition. There are politics in Iran!

The political landscape in Iran is certainly not a perfect democracy, but it is a parliamentary system where the power is dispersed amongst the elites and everything is done by consensus. This is the type of complexity that we’re not used to seeing in the west, especially in a controversial country like Iran. And lastly, the North Korea statement from the Singapore Summit was only a page, but in the Iran case, the JCPOA was a long process that provided 159 pages of agreed upon terms and conditions.

Right now, those who favored negotiations with the U.S are on the retreat because the last example of engaging with the United States resulted in Donald Trump nixing the JCPOA. Tweeting at the Iranian President in upper case letters, killing the JCPOA, imposing sanctions, and ratifying a travel ban on the country is not the path forward on addressing Iran. If Trump was truly interested in diplomacy, he would have eased his positions on these issues, but given the rhetoric and lack of carrots coming from the administration, it seems unlikely that they would slow down.

When Secretary of State Mike Pompeo addressed an audience at the Ronald Reagan Presidential Library in California, a majority of those who attended the speech were not Iranian-Americans. However, this was a part of the administration’s strategy to give the appearance that the Iranian-American community was in favor of this belligerent foreign policy Trump is pursuing vis-à-vis Iran.

The rhetoric that came out of Pompeo’s speech targeted a lot of negative actions taken by the Iranian government like internal repression and corruption, which a vast majority of the Iranian-American community oppose. However, Pompeo failed to succeed in translating the frustrations of the regime into Trump’s foreign policy on Iran. This backfired because Pompeo was trying to give the impression that he cares for the Iranian people and then hours later came Trump’s belligerent tweet which has leaned towards a direct confrontation with Iran. Many Iranian-Americans don’t support Trump’s policies because despite their frustrations with the government, thousands of lives would be at risk, and many in the diaspora do not want Iran to turn into another Iraq or Syria.

The Iranian-American community like many Iranians in Iran welcomed the ratification of the JCPOA because they wanted to see an improvement towards a normalization of relations between the two countries and reduce tensions. It also gives the people inside Iran an opportunity to do what only they can do to push their country in a more democratic direction. Washington cannot do this, but only Iranians inside Iran can do so, but the enmity between the United States and Iran, as well as the sanctions put so much pressure on the Iranian people to setback any diplomatic efforts.

A majority of officials in the U.S government supported the JCPOA. Former Secretary of State Tillerson supported the deal, Defense Secretary Mattis supported the deal, as well as Former National Security Advisor H.R McMaster. The primary reason why Trump nixed the deal was to undo what Obama did, and fulfill a campaign promise to his base that damaged multilateralism. This has nothing to do with American national interests.