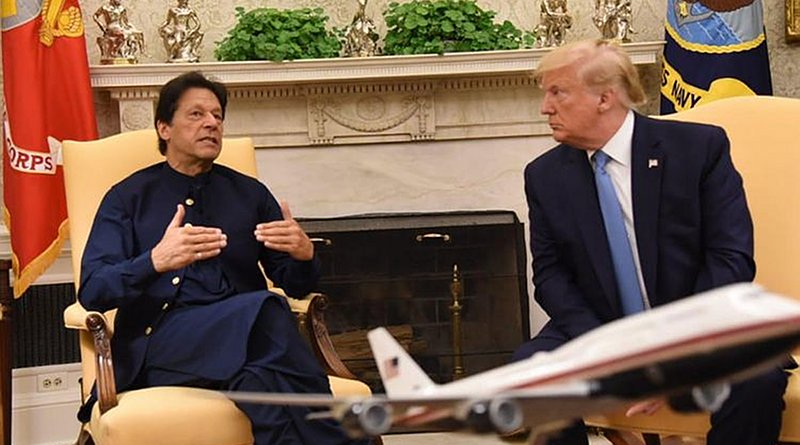 Pakistan Premier Imran Khan’s recently concluded visit to Washington, his triumphal enunciation of the Pakistani case on Kashmir and US President Donald Trump’s statement (disclosure?), wading into talk of “mediation” or “arbitration” on the Kashmir issue, are all indicative of the fact that India has been seemingly marginalised on the issue of Afghanistan.

India, which has massive stakes in Afghanistan, having invested over USD 3 billion in a whole range of development, infrastructure and even security assistance, does not find itself anywhere in the decision-making process or negotiations process. Not only was it left out of the trilateral US, Russia, China talks, for which Pakistan was included, on July 8-9, Zalmay Khalilzad, the US Special Envoy for Afghan Reconciliation, did not even swing by New Delhi to keep India briefed on either the Doha talks, where he claimed significant progress had been made, or the Beijing talks.

Instead, with the US squeeze on Iran and ending waivers for purchase of oil from Tehran, India’s ties with Iran have been hit and work on the Chabahar port has been impacted hard, forcing India to cut its own budgetary layout for the Chabahar port to USD 49 million, down from USD 150 million last year. For India, Chabahar port is critical for its access to Afghanistan; critical to its maritime security; and critical for connectivity with Central Asia and even Russia, where potential to enhance trade is immense, but hobbled by poor connectivity.

India and Iran had forged close links to form the Northern Alliance which had thrown out the Taliban’s regressive government from Afghanistan at the beginning of the millennium. The newly-cosying US-Pakistan relationship after Khan’s visit to Washington threatens to negate all other avenues for some kind of instiututional peace in Afghanistan in which the Taliban do not play a central role.

Trump met Khan at the White House on July 22 for talks in which, according to a White House statement, the two leaders “focused on strengthening cooperation between the United States and Pakistan to bring peace, stability, and economic prosperity to a region that has seen far too much conflict.” The pre- and post-meeting statements from the White House were in stark contrast to Trump’s angry tweets about Pakistan which ushered in New Year 2018: : “They have given us nothing but lies & deceit, thinking of our leaders as fools. … No more!”

Sitting next to Khan, Trump said “Pakistan never lies.” While the State Department statement issued after the talks makes no mention of immediate resumption of aid, the “strengthening cooperation” is dependent on Islamabad delivering on peace in Afghanistan. Which is ironic, considering that Pakistan claims it has no control over the Taliban and yet offers to intercede with them, to the detriment of the elected government in Kabul.

Khan, having received his accolades from the POTUS (President of the United States), went on to make a statement at the Institute of Peace that Pakistan has indeed been harbouring terrorists, possibly as many as 40,000 of them, and has 40 odd terror groups operating from its soil, including the Taliban and the Haqqani network, which wreak havoc in Afghanistan.   India, which has always sought an “Afghan led, Afghan-owned and Afghan controlled” peace process in that war-ravaged country, reiterated that stand at the United Nations ahead of Afghanistan’s presidential polls due in September, but has come around to accepting that the Taliban will be part of whatever final settlement does emerge. But its qualms about officially sharing a table with the fundamentalist-extremist outfit has ensured that it is kept out by the US and Chinese-led efforts to negotiate peace.

Meanwhile, Pakistan’s rehabilitation and, indeed, vindication in the US scheme of foreign policy is indicative of how the tough line the administration once promised on Pakistan has turned out to be mostly bluster, despite the fact that the Trump administration has acted more stringently to withhold aid and arms from Pakistan.

That the Trump–Khan meeting happened is itself a huge indicator of Pakistan’s indispensability to the Afghan peace process. Trump is desperate to get US troops out of Afghanistan as soon as possible – much before the next presidential election November 2020  – and needs Khan’s Pakistan to deliver on softening the Taliban. Islamabad, facing a severe financial crisis, is equally desperate to get back into Washington’s good books, to stave off possible blacklisting after the Financial Action Task Force (FATF) review due in October 2019.

Trump is seeking to use a carrot and stick approach with Pakistan to secure maximum possible cooperation in Afghanistan, the carrots being the release of billions of dollars in aid and restored defence cooperation and, worryingly for India, internationalisation of the Kashmir issue and soft pedalling on cross-border terror. Khan even managed a reprieve on the terrorism against India front by saying that the Jaish-e-Mohamed (JeM) had acquired local roots in Jammu & Kashmir.

That Trump actually said Indian Prime Minister Narendra Modi had sought US “mediation” or “arbitration” in Kashmir – a fact that India categorically denied, the State Department ignored and records showed to be false – added ballast to Khan’s pitch for Pakistan’s long-held position on third party mediation to resolve the troubled issue of Kashmir.

No US President or administration has gone down that road in the two decades since the Kargil War. That Trump did, shows that in his desperation to cut a deal to get US troops out of Afghanistan, he is willing to ignore the genuine concerns of Washington’s close strategic partner, ally and friend, and throw India, even if temporarily, to the Pakistan establishment-nurtured wolves in terror cloaks.

*About the author: The author is Editor, India Review & Analysis

An accident occurred at an industrial shed under construction in Iran’s Natanz nuclear site on Thursday, but it has left