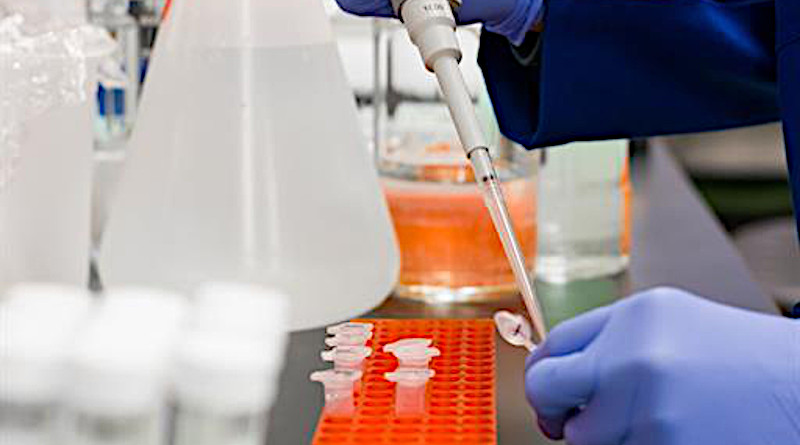 As coronavirus vaccine prototypes move closer to testing and approval, some Catholics are debating the ethical sources behind a leading vaccine candidate.

On Monday, President Donald Trump announced that the vaccine mRNA-1273, co-designed by the biotechnology company Moderna and the National Institute of Allergy and Infectious Diseases (NIAID), had entered phase 3 of clinical trials. The vaccine will soon be tested for safety, and to confirm that it can effectively prevent COVID-19 in two doses.

Dr. Anthony Fauci, director of NIAID and White House health advisor, said on Monday that a vaccine is “urgently” required to “control this pandemic,” but has also cautioned in recent days that, despite speedy progress, a vaccine might not be widely available until several months into 2021.

The Trump administration is funding vaccine candidates as part of “Operation Warp Speed,” making investments in vaccine candidates from Novavax, Moderna, AstraZeneca, and Janssen. It is also investing $1.95 billion with Pfizer to facilitate the delivery of 100 million doses after a vaccine is developed.

On Monday Fauci said that early testing of the Moderna vaccine indicates that it is “safe and immunogenic.”

While demand for a vaccine is urgent, questions have been raised by some pro-life advocates about the Moderna candidate, and its ethical development – specifically, whether it has been tested using a fetal cell line taken from an aborted baby.

The Charlotte Lozier Institute, research arm of the pro-life Susan B. Anthony List, has listed the Moderna vaccine among the “ethically uncontroversial CoV-19 vaccine programs,” along with development projects from Inovio Pharmaceuticals, Sanofi & Translate Bio, Pfizer and BioNTech, Novavax, and Merck/IAVI.

According to CLI, two vaccine candidates are the product of unethical programs—those being developed by the University of Oxford and Astrazeneca, and by Johnson & Johnson and Janssen Res. & Devel., Inc.

On the straightforward question of whether the Moderna vaccine is being produced from cell lines from elective abortions, Dr. John Brehany, director of institutional relations at the National Catholic Bioethics Center, said “it appears that the answer is no.”

Vaccines work use a weakened version of a disease, grown in laboratory  cell lines, in order to inoculate someone against the disease. With some common vaccines, such as those used to fight chicken pox and measles, mumps, and rubella (MMR), the cell lines of babies who were aborted decades ago are used to grow the weakened diseases.

This is also reportedly the case with some coronavirus vaccines in development, such as one worked on by the University of Oxford and Astrazeneca, which relies on the HEK-239 cell lines from a baby aborted in the Netherlands in the 1970s. That program is also being funded by the Trump administration’s “Operation Warp Speed.”

But the Moderna vaccine works in different way than most vaccines. Its method of innoculation “is not based on using cells at all in production,” Brehany said.

The Moderna vaccine relies upon a spike protein from SARS-CoV-2 to induce the production of antibodies in the recipient, instead of a weakened version of the disease.

The gene sequences for the spike protein were determined to be a good candidate for producing a vaccine.

Thus, Brehany said, while the company has some association with the use of cell lines from elective abortions, it is not responsible for that use, and its vaccine was not produced using those HEK-293 cells.

A 2005 document from the Pontifical Academy for Life considered the moral issues surrounding vaccines prepared in cell lines descended from aborted fetuses. The Vatican group concluded that it can be both morally permissible and morally responsible for Catholics to use these vaccines.

“In general, doctors or parents who resort to the use of these vaccines for their children, in spite of knowing their origin (voluntary abortion), carry out a form of very remote mediate material cooperation,” the pontifical academy said.

“The duty to avoid passive material cooperation is not obligatory if there is grave inconvenience. Moreover, we find, in such a case, a proportional reason, in order to accept the use of these vaccines in the presence of the danger of favouring the spread of the pathological agent, due to the lack of vaccination of children,” it added.

The 2008 Congregation for the Doctrine of the Faith document Dignitatis personae strongly criticized aborted fetal tissue research. The CDF said that researchers should “refuse” the material even when they have “no close connection” to “the actions of those who performed the artificial fertilization or the abortion.”

“This duty springs from the necessity to remove oneself, within the area of one’s own research, from a gravely unjust legal situation and to affirm with clarity the value of human life,” the CDF stated.

Regarding common vaccines, such as those for chicken pox and measles, mumps, and rubella (MMR), that may be derived from cell lines of aborted babies, the Vatican has said they could be used by parents for “grave reasons” such as danger to their children’s health.

Another ethical question at the heart of COVID vaccine production is the speed at which it is taking place.

The hurried development makes it all the more important that bioethicists scrutinize the vaccine, said NCBC president Joseph Meaney in a July 24 statement.

“Good bioethicists are nearly always wary when scientific research is rushed forward, and even more so when the potential impact on human beings could be profound,” he said.

Brehany echoed that point, telling CNA that a vaccine must be developed and distributed with the informed consent for all recipients about the possible risks, without testing on vulnerable populations especially the poor.

“It is critically important that Americans have access to a vaccine that is produced ethically: no American should be forced to choose between being vaccinated against this potentially deadly virus and violating his or her conscience,” the bishops wrote.

The letter was signed was the chairs of the U.S. Catholic bishops’ committees on pro-life issues, doctrine, and domestic justice, and subcommittee on health care issues. Leaders of pro-life and bioethics groups, including the National Catholic Bioethics Center, the Catholic Medical Association, and the American College of Pediatricians, also signed the letter.

Brehany said that vaccines derived from cell lines of aborted babies is “a very significant bioethical issue” that Christians and pro-lifers “ought to take seriously.”

“This is the time to be advocating for alternatives,” he said of current COVID vaccine production and ethical sources for vaccines.

Around 30,000 people who are not COVID-positive will be enrolled in the phase 3 testing of the Moderna vaccine. The Food and Drug Administration (FDA) will then review the testing results.

In addition to the Moderna candidate, Trump said that four other vaccine candidates “are expected to enter final trials in the coming weeks.”

Home » Is Coronavirus Vaccine Made From Fetal Cell Lines?