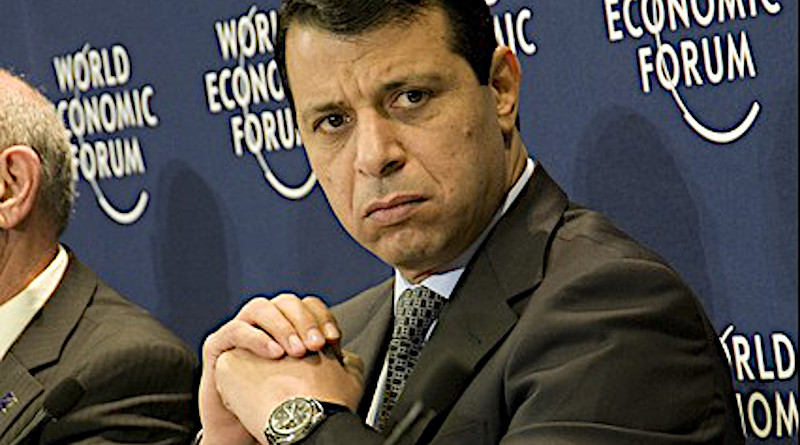 “I accept this nomination for President.”  No, not Joe Biden at the virtual Democratic convention on August 20, agreeing to run for the presidency of the United States.  This is Mohammed Dahlan, bidding to succeed Mahmoud Abbas as president of the Palestinian National Authority and self-styled State of Palestine, yet again.   Yet again, because there are grounds for believing that he has tried at least once before, and perhaps more often than that.  For years rumours of plots and counterplots have eddied around this charismatic Palestinian politician, whom PA President Mahmoud Abbas regards as his greatest enemy, but who might very well eventually succeed him.

Who is Mohammad Dahlan?

Born in 1961 in the Khan Yunis refugee camp in the Gaza Strip, as a teenager he helped set up the Fatah Youth Movement. In his twenties he was arrested by the Israeli authorities on numerous occasions for political activism, but never for terrorist activities.  He put his time in Israeli prisons to good use by learning Hebrew, which he speaks fluently.

After the Oslo Accords in the early 1990s, Dahlan was chosen to head the Preventive Security Force in Gaza.  Building up a force of 20,000 men, he became one of the most powerful of Palestinian leaders.  He had regular dealings with the CIA and Israeli intelligence. During this period Gaza was nicknamed “Dahlanistan”, reflecting the extent of his authority – an authority severely dented in 1997 when it emerged that he had been diverting taxes to his personal bank account.

That incident appeared to have effected a sea-change in Dahlan.  In 2001, in a virtual challenge to Yassir Arafat, he began calling for reform in the Palestinian National Authority.  A year later he resigned and, portraying himself as an outspoken critic of Arafat, repeatedly tried to campaign on a reform and anti-corruption ticket.  As a result Dahlan and his followers won over most of the Fatah sections in Gaza.

The 2006 Palestinian elections saw Hamas gain a majority in Gaza.  Dahlan called their election victory a disaster, and in January 2007 held the biggest-ever rally of Fatah supporters in the Gaza Strip, where he denounced Hamas as ‘a bunch of murderers and thieves’.  His instinct was vindicated six months later when Hamas staged a bloody coup in Gaza, seized power and expelled those Fatah officials it had not murdered.  Years later it was revealed that Dahlan played a key role in an abortive US plot to remove Hamas from power.

In October 2007 the Bush administration reportedly pressured PA president Mahmoud Abbas to appoint Dahlan as his deputy. Some Fatah officials asserted that the US and some EU countries made it clear that they would like to see Dahlan succeed Abbas.

Aware of this, the PA president perceived Dahlan as his rival for office, and took action. In June 2011, following allegations of financial corruption and murder, Dahlan was expelled from Fatah’s ruling body.  Abbas accused him of murdering the late Palestinian leader, Yasser Arafat, though he never charged him formally.  It was on corruption charges that Dahlan was tried by the PA in absentia.

Over the years rumours have persisted about Dahlan’s involvement in all manner of conspiracies.  For example, his name has become attached to the 2016 attempted coup in Turkey against the regime of President Recep Tayyip Erdogan. It is alleged that Dahlan headed a multinational plan to overthrow Erdogan, led by the United Arab Emirates (UAE), and backed by Russia and Iran.  In December 2019 Turkey offered a $1.7m reward for tracking Dahlan down, and issued warrants charging him with perpetrating the 2016 coup attempt.

Whether or not Dahlan’s fingers were in this particular pie, there is no doubt that his international influence extends far and wide.  Dahlan has lived in the UAE for many years, and is an adviser to the crown prince, Mohammed bin Zayed al Nahyan.  He has ties with Egypt, Saudi Arabia, Jordan and the Syrian opposition, and is closely connected also with Serbia and Montenegro.

In May 2016 the media website Middle East Eye gave credence to yet another rumour circulating around Dahlan.  Asserting that Egypt, Jordan and the UAE had been liaising in a plan for Dahlan to be next head of the PA, it maintained that Hamas was on side, prepared to overlook its long history of hostility to Dahlan.  The planned post-Mahmoud Abbas era would leave Dahlan, his arch-rival, in control of the Palestinian presidency, the PLO and the PA. It reported that the UAE had held talks with Israel about the strategy to install Dahlan, and that the three principals intended to inform Saudi Arabia once they agreed its final shape.

This, like previous similar stories, came to nothing.  Now, with the new UAE-Israel deal, the idea of a Dahlan bid for the Palestinian presidency resurfaces, stronger than ever.  For the word is abroad that Dahlan played a key role in bringing the deal to fruition.  Palestinian officials are quoted as saying they have no doubt about it.

Dahlan has set himself at odds with the current Palestinian establishment by not opposing the deal, but coming out in somewhat equivocal support.

“The UAE,” he said, as if speaking for the administration as a whole, “will use its efforts to directly pressure the American administration and others to end the annexation plan completely and replace Trump’s settlement plan with decisions of international legitimacy and the Arab Peace Initiative.”

If Dahlan succeeds this time in establishing himself as Abbas’s successor in long-postponed presidential elections, he may prove to be the new broom so long needed on the Palestinian political scene.  Dahlan is no conviction politician.  He is a wheeler dealer, rather in the Trump mould.  He, more than any Palestinian politician, seems to have the qualities needed to sweep aside the outworn attitudes of the leadership that have shackled the Palestinian people for decades, and embrace a more realistic approach to reaching an accommodation with Israel and the brighter future that is surely attainable for the whole region.

Home » A Bid For The Presidency – Analysis