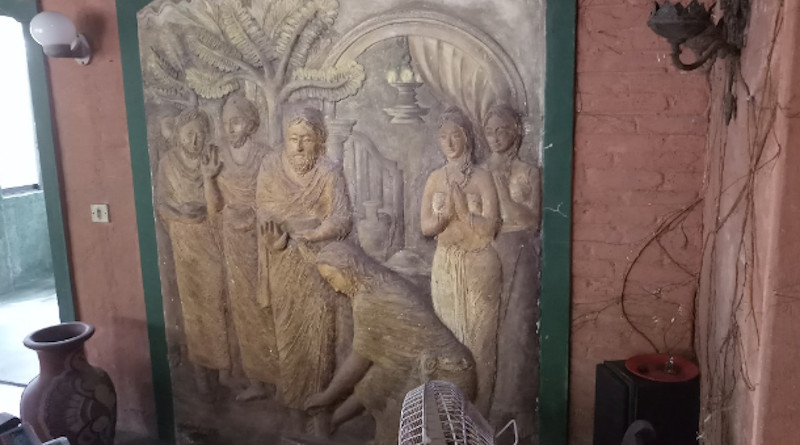 The bas-relief sculpture of Jesus washing the feet of his disciples at Tulana in Kelaniya. (Photo supplied)

Aruni Ruwandathi, a Christian graduate student, was surprised to find a bas-relief sculpture of Jesus washing the feet of his disciples at Tulana in Kelaniya.

Buddhist monk Ven. Uttarananda Thera had depicted the Biblical scene on a wall at Tulana Research Centre for Encounter and Dialogue. When monks go looking for food with their begging bowls, the master of the house washes their feet as they enter and offers them food, recalling the image of Christ washing his disciples’ feet.

Jesuit Father Aloysius Pieris, a theologian and the first Catholic priest to write a PhD thesis on Buddhist philosophy, said the teacher or master washing the feet of his disciples is unique.

Father Pieris said this artwork is part of the creative Buddhist-Christian dialogue in the era of globalization.

“It shows how Buddhism and Christianity can act as a source of hope to people who suffer from socioeconomic injustice, religio-political conflicts and environmental crises,” he said.

Tulana Research Centre for Encounter and Dialogue was established for Buddhist-Christian interfaith relations in 1974.

The Second Vatican Council (1962) recommended that the Church should everywhere become a native church integrated into indigenous cultures.Inculturation has enabled the Church to transform from universal standards to local cultural variations. For instance, the architecture of St. Philip Neris Church in Kalutara in Colombo Archdiocese recalls the Paththirippuwa of the Temple of the Sacred Tooth Relic in Kandy.

The Paththirippuwa is an octagonal pavilion and one of the three main structures which comprise the temple in the palace complex of the former kingdom of Kandy.

The tooth was brought to Sri Lanka in the fourth century. Since ancient times, it has played an important role in local politics because whoever holds the relic rules Sri Lanka.

A pair of large lotus-shaped punkalasa and a highly ornate semi-circular sandakada pahana (moonstone) at the entrance of St. Philip Neris Church recall the entrance of ancient Buddhist monastic buildings.

The lotus is a symbol of spiritual awakening in Hinduism and Buddhism.

Nuwan Manathunga, who has studied Catholic history, said the sandakada pahana, a Buddhist symbol, can be seen at the entrance to several churches and Christian institutions.

The architecture of the Cathedral of Christ the Living Savior was formed as a Buddhist temple, while Trinity College chapel in Kandy is a rediscovery of ancient Buddhist heritage. Holy Rosary Church in Badalgama in Colombo is another church reflecting Buddhist architecture.

Manathunga said these churches are a result of the concept of inculturation advocated by the Second Vatican Council, with each culture expressing Christ’s message in its own way and fostering a living exchange between the Church and diverse cultures.

“Christians want to practice their religion in the context of Sri Lanka and to be close to non-Christians. Unfortunately, extremist Buddhist monks think that Christians have stolen Buddhist culture,” he said.

Bodu Bala Sena, Ravana Balaya and Mahasohon Balakaya are among the new wave of organizations fomenting animosity against Muslims and Tamils whose leaders have been accused of promoting hate speech.

“Extremist monks have attacked symbols found at the entrance of churches in the last few years. They claimed that churches should not use their symbols,” Manathunga said.

Catholicism was promoted by Father Jacome Gonsalves, a missionary from India who came to Sri Lanka in 1705. The Oratorian priest from Goa introduced Pasan (lamenting hymns) when he came to assist St. Joseph Vaz, the first saint of the island, who landed in 1686.

Father Gonsalvez studied Sinhala under Buddhist monks and learned to read Sinhala and Tamil classics. He wrote 22 books in Sinhala, 15 in Tamil, four in Portuguese and one in Dutch by using local culture.

He composed nine sets of Pasan to be recited between sermons. These original songs were collected in a book, Desana Navaye Pasan Potha (Book of Dirges), still used to this day.

The Portuguese introduced Catholicism to Sri Lanka in 1505. However, the Dutch, who took over in 1658, introduced Protestantism and persecuted Catholics.

St. Joseph Vaz, an Oratorian priest, went around the country reviving the faith in secret. Starting as a lone missionary in a forbidden land, he later won the friendship of the Buddhist king of Kandy from where he ran eight missions serving more than 60 mission stations.

Ruwandathi said a priest recently carried a blessed sacrament on the back of an elephant. This was an act of inculturation. Buddhists carried the Tooth Relic of Lord Buddha on an elephant at Kandy during a massive procession for many years.