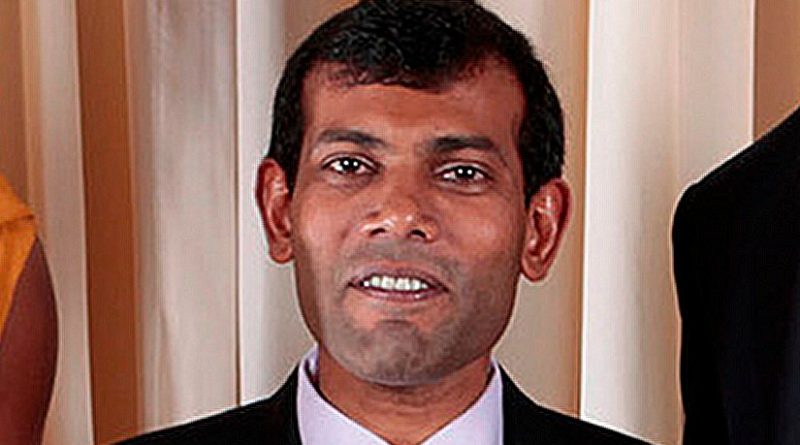 While jailed former president Mohammed Nasheed might have done enough damage to his case and cause by initially refusing to prefer an appeal against the trial court verdict, his celebrated overseas legal team might have become an additional cause for concern. By demanding sanctions against Maldives at a news conference after a meeting with their client in his prison, Amal Clooney (London) and Jerad Gesner (Washington) might have denied themselves a visa to enter the country in the future.

It’s unclear if the overseas duo, along with a host of others, were only campaigning for Nasheed’s early release or were also actively engaged in guiding his local defence on the ongoing appeals process. However, the response to them came not only from the government but more so from Cherie Blair, lawyer-wife of former British prime minister Tony Blair, whose Omnia Strategy consultancy firm had been hired by President Abdulla Yameen’s administration for an effective international campaign in its favour.

“The next stage will be to pursue targeted sanctions, travel bans and any other action and recourse that we have against the government (of Maldives) until this matter is resolved,” Haveeru Online quoted Amal, wife of celebrated actor George Clooney, as saying. In a joint statement issued by the foreign ministry and Omnia Strategy on Wednesday, Blair was quoted as saying that the Maldives should not be penalised for bringing a person to face justice. The use of sanctions threatens the Maldives’ economic stability, she said.

“Sanctions are imposed in exceptional circumstances to force compliance with international law, where there is a threat to peace, or where they are imposed in response to a specific policy. They ought not to be used when dealing with a single individual,” Blair said. She pointed out that Maldives was a young democracy, recently undergoing a period of transition. All current systems and institutions should be subjected to a detailed period of review and reform where appropriate to enable the state to progress, she added.

Foreign Minister Dunya Maumoon, for her part, said the threat of sanctions by Nasheed’s international legal team was “deeply regrettable”. She said Maldives’ judicial institutions are demonstrating a clear commitment to upholding the rule of law. “The international community is entitled to raise legitimate criticisms. However, the appropriate forum is the courts where the matter at issue concerns a legal process,” Haveeru Online quoted Minister Maumoon as saying in the joint statement.

Even without the overseas consultants getting more directly involved, not stopping with advising and guiding their respective clients, the Nasheed case was moving increasingly into the international arena. In a separate statement and context, the foreign ministry took exception to the refusal of Hugo Swire, state minister at the British Foreign and Commonwealth Office (FCO), to meet with the government’s ‘legal representatives’ after agreeing to meet them along with Minister Maumoon in London.

Maumoon herself cancelled a sideshow at the ongoing UN Human Rights Council (UNHRC) session in Geneva, organised by Amnesty International, and the government dubbed as “wholly inappropriate” UN Human Rights High Commissioner Zeid Ra’ad Al Hussein’s call for Nasheed’s freedom. In his inaugural speech to the 30th UNHRC session, Prince Zeid reiterated that the Nasheed trial was “flawed” and that law in Maldives “continues to be manipulated for political ends”; to which the government said that such “characterization” of the situation Maldives was completely “baseless”.

Zeid had also labelled Nasheed’s transfer back to prison as a serious setback. In a possible reference to the search of Nasheed’s home for evidence on the purported government decision to convert his entire jail term to house arrest, he said that the “pursuit of a further criminal investigation against his family” too was a setback. Refuting Zeid’s statement, the government continued to insist that Nasheed’s transfer to house arrest “was only a temporary measure”. It also said that Zeid’s demands were ‘wholly inappropriate’ when the UN Working Group on Arbitrary Detention was already seized of the matter, and sought to influence its conclusion.

At the same time, the Yameen government continued playing the yo-yo on ties with the international community. In a statement before he left on Haj pilgrimage – Vice-President Ahmed Adeeb is holding formal charge – Yameen celebrated the golden jubilee of Maldives joining the UN. As may be recalled, that independent of British Minister Swire’s refusal to meet the government legal representatives and long before it, Maldives had openly threatened to quit the Commonwealth – and more than once in the past couple of years – after the latter had taken strong positions on Nasheed’s behalf since he lost power in 2012.

Highlighting that Maldives had since pioneered the cause and concerns of small nations, particularly in terms of their security, climate change disaster and the like, Yameen in his statement claimed that the nation’s admittance into the UN was a sign of ‘international acceptance’. In her turn, Foreign Minister Maumoon said that joining the UN was the ‘most important foreign policy decision’ that the country had taken, and also pointed out how it was done within three months of Maldives obtaining Independence.

In the midst of all this, the high court rejected the prosecutor-general’s suo motu appeal for a review of Nasheed’s trial court conviction and sentence, after the former president had refused to do so, insisting instead that the government had powers under the law to do so, if it so desired. However, after the high court rejected the prosecutor general’s plea, Nasheed’s Maldivian Democratic Party (MDP) indicated that the state-initiated appeal itself was aimed at scuttling his chances, but the PG’s office said they would be appealing the high court verdict in the Supreme Court.

For his part, President Yameen claimed that he had done everything possible for Nasheed, and that he was unconcerned by threats of sanctions. Yameen said that following the high court’s decision Nasheed now had the option of appealing to the Supreme Court. Even if Nasheed’s lawyers threaten sanctions, “this president will not violate due process”, he insisted. It’s the line that the Yameen government has been taking ever since Nasheed’s arrest, trial and upgrading of original criminal charges into ‘terrorism charges’, but the international community, particularly the West, seems to be unconvinced.

Reiterating that there were no longer political prisoners in Maldives, President Yameen stressed that any high-profile politician facing criminal charges had nothing to do with the government. In an obvious reference to the UN panel hearing on ‘arbitrary detention, he added: “There is no one in detention arbitrarily”. According to him, under the presidential scheme, coupled with the ‘separation of powers’ (in the 2008 Constitution) advocated by international partners, the “president does not even have such powers”.

Again playing the yo-yo, he made a pointed reference to the prevailing scheme in the US – an ardent backer of global ‘human rights concerns’ in general and president Nasheed in particular. “When the US Supreme Court delivers a verdict, are letters written to President Barack Obama? They don’t do that now, do they? It’s because a Supreme Court verdict has nothing to do with Barack Obama. The judiciary is a separate and independent body,” he observed.

For all this however, the Clooney-Geisner visit was marred by social media expose of what was claimed to be a ‘leaked’ conversation between the duo and Nasheed in his prison. The government promptly denied any hand in the same. For her part, Clooney also did not want to attach importance to husband George’s observations — coinciding with her Maldives visit — against the Nasheed arrest and human rights situation in the country.

*N. Sathiya Moorthy is Director, Chennai Chapter of the Observer Research Foundation. He can be reached at: [email protected]