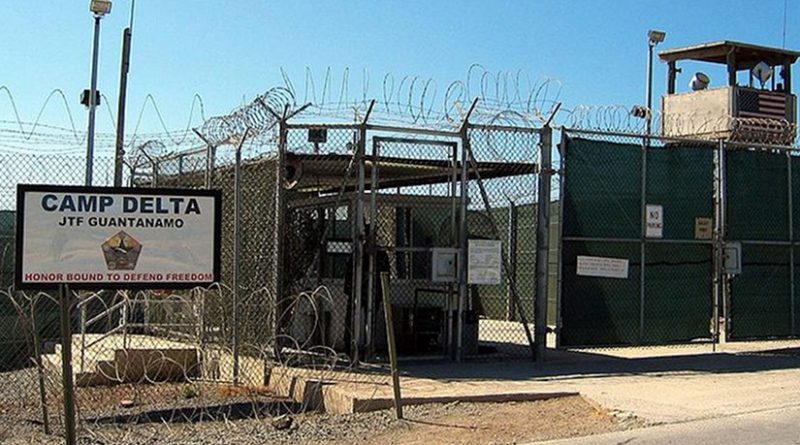 We marked a sad milestone this week — 250 days since the start of Donald Trump’s presidency. Across the spectrum of political life, the disaster that is Donald Trump continues to damage the US at home and to tarnish America’s reputation abroad, and, while there are too many problems to list, certain recent issues stand our for us —the persistence with which Trump continues to try to implement his outrageous Muslim ban, his racist targeting of black sportsmen for what he perceives as their lack of patriotism, and his warmongering against North Korea at the United Nations.

Islamophobia, racism and warmongering are always to be despised when they raise their ugly heads at the highest levels of government, and when it comes to our particular topic of concern — the prison at Guantánamo Bay — these signs from Trump do not bode well for our aim of seeing Guantánamo closed once and for all.

It is true that Trump has not yet managed to do anything stupendously negative regarding Guantánamo, despite threatening to do so. And so, for example, he has not officially rescinded President Obama’s executive order calling for the prison’s closure, and has not sent any new prisoners there, despite very evidently wanting to do so.

And yet, the overriding feeling regarding Guantánamo, 250 days since he took office, is that he has shut the door on it, leaving the military to keep running it in a zombie-like manner, without real purpose, and without real leadership. The farcical military commission pre-trial hearings continue, in a broken echo of justice, never apparently getting any closer to any kind of resolution, or anything truly resembling justice, and every few months a military panel meets to approve the ongoing imprisonment of the 26 men still eligible for Periodic Review Boards, the parole-type process that President Obama introduced in 2013, which led to 36 men being approved for release and freed before he left office.

However, two other men approved for release by the PRBs, and three men approved for release in 2009 by an earlier review process — the Guantánamo Review Task Force — weren’t released under Obama, and continue to be held under Trump, who, it seems clear, has absolutely no intention whatsoever of releasing them, shaming his office and what it stands for, as these are men whose release was unanimously recommended by high-level government representatives from departments including the Departments of Defense and Justice, and the intelligence agencies.

I wrote about the plight of these men for Al-Jazeera back in June, and throughout the year, here at “Close Guantánamo,” we have tried to keep alive the small, flickering flame of dissent against the continued existence of Guantánamo through our latest photo campaign, in which concerned citizens, from the US and around the world, and more well-known individuals, who deign to raise their heads above the parapet, have been sending in photos of themselves holding placards urging Donald Trump to close Guantánamo.

Please join us. There are over 50 photos on the “Donald Trump No! Please Close Guantánamo” page on our website, and by sending in a photo you’ll be in fine company — with Arturo O’Farrill, for example, the jazz musician whose photo above was used to mark 250 days of Trump’s presidency on the Close Guantánamo website and associated social media.

Born in Mexico and raised in New York City, Arturo O’Farrill is the son of Latin jazz musician, arranger and bandleader Chico O’Farrill, and is the director, composer and pianist for the Afro Latin Jazz Orchestra. He has received two Grammy Awards for his work.

In January, the night before Donald Trump’s inauguration, Arturo hosted “Musicians Against Fascism,” an extraordinary event at Symphony Space, on Broadway in New York City, and a fundraiser for the newly-formed anti-Trump organization, RefuseFascism.org. Arturo’s introduction to the concert is here, and the whole three and a half hour concert is posted below.

Musicians Against Fascism from Deep Dish TV on Vimeo.

The concert brought together dozens of the most talented jazz musicians and singers in New York to oppose Trump’s presidency. I was honored to watch the concert, which lasted for several exhilarating hours, and to realize that most of the performers knew full well what they had to fear from a presidency in which racism is prominent, as two performances made clear — Billie Holiday’s “Strange Fruit,” sung by Somi feat. Toru Dodu (piano) and Liberty Ellman (guitar), at around 1 hour and 30 minutes, and Nina Simone’s “Four Women” by Amirtha Kidambi and the Elder Ones — Max Jaffe (drums), Brandon Lopez (bass) — at around 50 minutes.

Thanks to everyone who continues to support the Close Guantánamo campaign. We know it must be difficult to sustain interest when so little is happening, but the fact is that Guantánamo remains a legal, moral and ethical abomination — founded on warmongering, Islamophobia and racism — and all decent people must continue to call for its closure.

Home » No Justice At Guantánamo After 250 Days Of Trump – OpEd