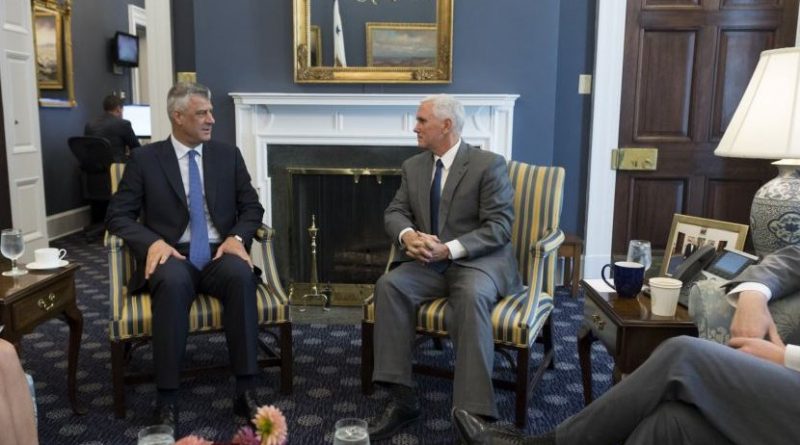 US Vice President Mike Pence on Friday encouraged Kosovo to ratify a border demarcation agreement with Montenegro to resolve the longstanding dispute.

Pence made the comments in a meeting with the Kosovo’s President Hashim Thaci at the White House.

The European Union is pressuring Kosovo to resolve the border conflict with Montenegro as part of the country’s citizens being allowed to travel visa-free in the Schengen zone.

According to the White House, besides speaking on the border dispute, Pence reaffirmed the US’ support for a sovereign, democratic, and prosperous Kosovo.

Additionally, Pence expressed appreciation for Thaci’s leadership, along with Serbian President Vucic, to advance the EU-facilitated dialogue to normalize relations between Kosovo and Serbia, the White House said.

Kosovo declared independence from Serbia in 2008, however Serbia still doesn’t recognize its independence.

Pence and Thaci agreed on the importance of advancing reforms to strengthen the rule of law, fight corruption, and boost economic growth, and the Vice President expressed support for the transformation of the Kosovo Security Forces via constitutional means, the White House said.