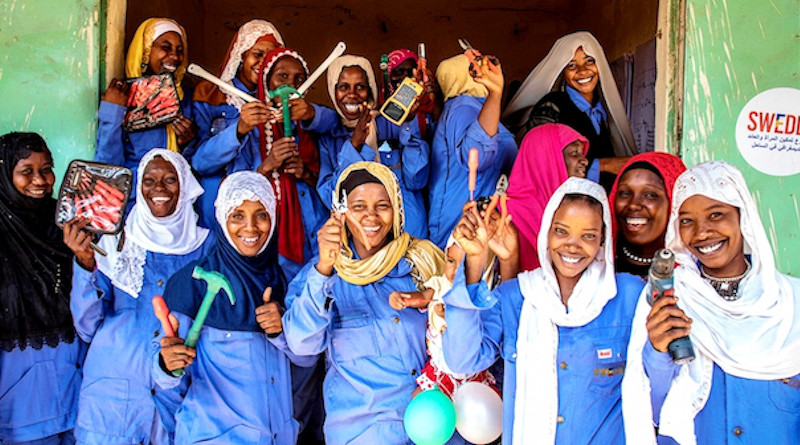 In Chad and other countries where it is working, SWEDD-The Swedish Development Aid Organization has already provided professional training to almost 100,000 women so they can pursue income-generating activities. Credit: Vincent Tremeau/The World Bank.

The Beijing Declaration and Platform for Action signed in 1995 committed the world to end discrimination, promoting women’s rights and advancing gender equality and women’s empowerment.

This year marks 25 years in the implementation journey, a useful time to reflect on the progress made for Africa’s women and build momentum to overcome the remaining barriers during this last Decade of Action to achieve the Agenda 2030 for Sustainable Development.

A recent Africa regional review by the Economic Commission for Africa, UN Women and Africa Union Commission celebrates the progress made in promoting and protecting the rights of Africa’s women and girls while recognizing gaps and slow progress in political, social and economic inclusion.

Countries have made progress in maternal health and advanced women’s and girls’ rights to education, access to social protection, prevention and criminalization of gender-based violence as well as the constitutional and legal right to inherit.  Critical areas of concern that are slowing progress for Africa’s women are linked to poverty and inequality of economic opportunity as well as exclusion from decision making.

Underlying these intersecting challenges are concerns related to access to health and education, property rights, and vulnerability to violence and various economic, environmental and political shocks.

One of the root causes identified in the political declaration outcome of the regional review is “deep-seated negative traditional and cultural practices, and negative social norms that persist in some African countries, that continue to put women and girls at a disadvantage”.

For the 13 African countries included in the study, the level of bias is higher and it is growing. More African women and men agree with the notion that men make better political leaders and it is not essential for women and men to have the same political rights.

Progress for women always comes at the expense of progress for men: There is a perception that there are finite resources and opportunities and empowering women reduces the opportunities available for men. Yet today’s reality particularly in the digital age is about creating value.

Harnessing the full complement of a nation’s human capital means more value can be created not less. A 2017 UN study estimated that closing gender gaps in African women’s labour force participation, paid work, employment and productivity would yield increases in GDP from 3 per cent to 16 per cent.

It is up to women in the workplace to balance work and family: Women often spend more than twice the time that men spend on unpaid domestic work and caring for the young and the old. This limits options for paid work and slows career advancement.  The burden must shift to institutions to meet the unique needs of women in the workplace. Social institutions including social norms and gender stereotypes should also evolve towards more equitable burden-sharing in the home to expand opportunities for an inclusive labour market.

Only legislation will drive gender equality. African countries already have robust legal norms, precedents and legislation in place that promotes gender equality and women’s rights at national, regional and continental levels. To date, 42 countries have ratified the Protocol to the African Charter on Human and People’s Rights on the Rights of Women (Maputo Protocol) that came into force in 2005.  The challenge is in ensuring that these standards are accepted, fully implemented and enforced. There is still a gap between legal rights and prevailing practices and behaviours embodied in social and cultural norms.

The Africa regional review and December 2019 global expert group meeting on 25 years of implementation highlighted a number of areas that could help to accelerate the achievement of the Beijing Platform for Action in Africa including:

Beyond competition, nurture a partnership between all actors to invest in women’s meaningful participation in productive sectors and their access to resources to increase wealth and reduce poverty for all of society.

For instance, enhancing women’s access to agricultural inputs, assets and markets to close agricultural productivity gaps between women and men. In Malawi, Tanzania and Uganda, closing these gaps would lead to a combined increase in GDP of USD 267 million, according to UN Women. This translates to lifting 238,000 people out of poverty in Malawi, approximately 80,000 people in Tanzania and 119,000 people in Uganda.

Beyond the workplace, transform social rights and protection to ensure equitable and inclusive employment. Public and private institutions should implement equitable employment practices as well as provide adequate social services.

Beyond legislation, change hearts and minds and leave no one behind to bridge the divide between formal legislation, social norms and institutions. From land ownership to addressing gender-based violence and promoting equitable participation in decision making, successful efforts to advance gender equality have combined legal instruments, advocacy, enforcement and changing social norms.

For instance, the ‘school for husbands’ in several countries including Burkina Faso and Niger works to break down gender stereotypes and enlist men in ending violence and empowering their wives and daughters. Championing gender equality across generations and sectors is also increasingly important.

This is the aim of the African Women Leaders Network with national chapters in over 15 countries that aims to transform Africa by championing women’s leadership in governance, peace, finance, youth empowerment, agriculture, and social mobilization.