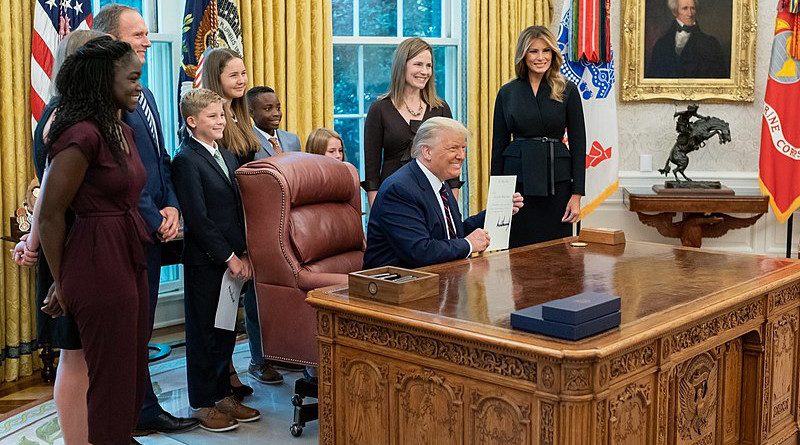 Judge Amy Coney Barrett and her family with US President Donald Trump and First Lady Melania Trump after being nominated for the Supreme Court. Photo Credit: Dan Scavino, the White House

U.S. lawmakers have battled through a tumultuous political year on Capitol Hill that has included a Senate impeachment trial, a pandemic and the largest aid package in U.S. history.

A Senate vote would not only cement a 6-3 conservative majority on the court, it will also likely galvanize voters of both parties, many of whom will be participating in early voting as the confirmation process gets under way. Senate Judiciary Chairman Lindsey Graham said Saturday the hearings would begin Monday, October 12.

The Supreme Court nomination could be a boost for Trump, who currently lags behind Democratic presidential nominee Joe Biden in polls in most key states. Trump has made appointing conservative judges who could overturn key decisions on abortion rights and gay marriage a centerpiece of his appeal to voters. In 2016, one quarter of voters who backed Trump said a president’s ability to nominate Supreme Court justices was an important factor in their vote.

“President Donald Trump campaigned in 2016 and he’s campaigning again promising to appoint judges to federal courts and justices to the U.S. Supreme Court who are textualists and who are originalists who interpret the law based on what it says, rather than on the basis of what they might wish that it said,” Republican Senator Mike Lee told ABC’s This Week on Sunday.

But the nomination will also mobilize Democratic voters who say Republicans’ willingness to move forward with the confirmation so close to the election reveals their hypocrisy.

In 2016, Senate Majority Leader Mitch McConnell did not take up President Barack Obama’s nominee, Judge Merrick Garland, saying, “All we are doing is following the long-standing tradition of not fulfilling a nomination in the middle of a presidential year.”

McConnell told Fox News on Friday there was nothing inappropriate about President Trump’s nominee receiving a confirmation hearing this election season because Republicans have control of the Senate.

In recent decades, it has taken Supreme Court nominees an average of 67 days to go from nomination to confirmation. When the hearings for Barrett begin on October 12, Election Day will be 23 days away. Congressional Democrats have criticized Trump and Senate Republicans for accelerating the confirmation timeline ahead of the election.

“This is certainly legitimate for him to make a nomination. We also know it’s clear in the record in the Senate that between July and November of a presidential election year, there has never been a confirmation of a United States Supreme Court justice. Never — either party — never happened,” Democratic Senator Debbie Stabenow told Fox News Sunday.

A Brookings Institution study of Supreme Court confirmations in the post-Civil War era shows that until 2016, all vacancies in election years were filled by confirmations or recess appointments.

Republican Senator Roy Blunt told NBC’s Meet the Press on Sunday there was no contradiction in the Republican-led Senate Judiciary Committee considering Trump’s nominee so close to an election.

“Fifteen times in the history of the country when there’s been a justice, a vacancy in an election year and when the president and the Senate were in political agreement, then they almost always fulfill the two obligations. And if they weren’t, they almost never did,” Blunt said.

According to polling site Five Thirty-Eight, 52% of Americans say the vacancy should be filled by the winner of the presidential election.

But Trump has also explicitly tied the Supreme Court nomination to election results, suggesting a ninth justice will need to be seated in time for conflicts over votes.

“I think this will end up in the Supreme Court,” Trump said about the election last week. “And I think it’s very important that we have nine justices. It’s better if you go before the election, because I think this scam that the Democrats are pulling — it’s a scam — the scam will be before the United States Supreme Court. And I think having a 4-4 situation is not a good situation.”

On the basis of Trump’s comments, Senate Minority Whip Dick Durbin said it would be a good idea for Barrett to recuse herself from any election-related cases if she is confirmed.

“It would evidence the fact that she wants to be fair in addressing this,” Durbin told ABC’s This Week. “Why? Because this president has been outspoken and outrageous to think that he would not accept the verdict of the election and that he would make it clear that he’s filling this vacancy on the Supreme Court to make sure it tips his way if there’s any election contest. That is an outrage. No president has ever said that in our nation’s history.”

McConnell appears to have secured enough votes to confirm Barrett even though Republican Senators Susan Collins and Lisa Murkowski have said they would not vote on a Supreme Court nominee ahead of the election.

Congressional Democrats have few options to stop the confirmation process. But they are using the nomination to highlight key issues in the coming election, including a warning that Barrett could help overturn the Affordable Care Act.

House Speaker Nancy Pelosi suggested Trump is rushing the nomination not only to seat Barrett ahead of Election Day but to ensure she is place when the Supreme Court is expected to hear a case on the Affordable Care Act on November 10.

Senator Durbin acknowledged on Sunday that Democrats do not have a “silver bullet” for slowing debate on Barrett.

“We can slow it down perhaps a matter of hours maybe days at the most, but we can’t stop the outcome,” Durbin told ABC’s This Week. “There’ve been two Republicans who have spoken out already — Senators Murkowski and Collins — that said they won’t support this procedure before the election. If two others decide during the course of the debate to stand up and take the same position. Then we could have a different timing, perhaps a different outcome.”

Graham told Fox News he expected to have the nomination cleared out of the Senate Judiciary Committee by October 26, giving McConnell the opportunity to schedule a full vote on the Senate floor just days before the election.