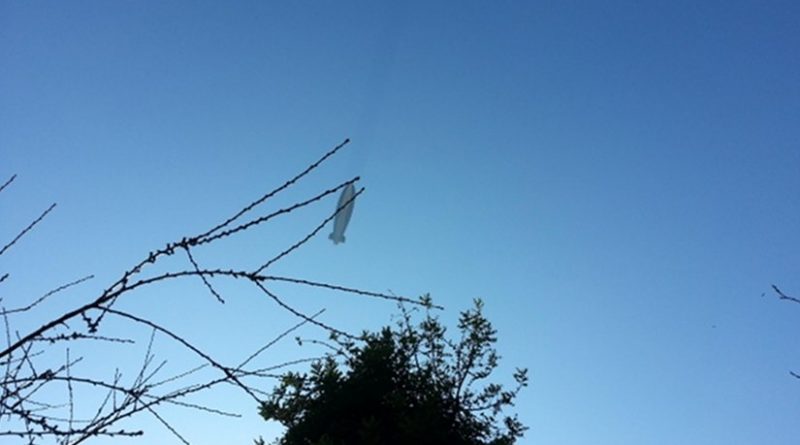 Most Americans living in the northeastern and mid-Atlantic region of the country probably didn’t realize that for the last year or so they’ve been being spied on from the sky by a sophisticated ‘eye-in-the-sky’ blimp tethered to the ground in Maryland’s Aberdeen Proving Ground.

Air Force jets, which notoriously were not scrambled as four jets were commandeered and flown into the World Trade Center towers and the Pentagon on Sept. 11, 2001, were scrambled quickly in this case to track the wayward blimp as it drifted with the wind into Pennsylvania.

It just goes to show you that the military can do the job when it wants to.

It will be interesting to see what they do if this thing comes down. It’s big enough to do some damage, but my guess is the feds will do a good job of keeping the public from getting too close to it.

As it is, they’re not saying much about what this thing was doing in the first place.

The Army has claimed the purpose of this and a second blimp has been to defend the US against an attack by cruise missile, but that seems strange, given that most of its cameras point groundward. According to a December 2014 report in Intercept magazine, these two blimps, built by Ratheon Corp. have the ability to scan 340 miles in all directions, covering an area the size of Texas, and to see and track vehicles within that range.

Ominously, while one blimp has high definition radar equipment, the other is equipped, according to the Army, to provide detailed “targeting information.”

I’m wondering where spotting and defending against cruise missile attack, which after all would likely come from the ocean, not from a 360-degree radius, comes into any of that.

The Intercept noted a year ago that the Army originally had plans to put as many as 32 of these huge 600,000-cubic-foot monstrosities around the country (all presumably defending against cruise missile attack!), but that grandiose plan was dropped because of cost (each unit costs millions of dollars to build and operate, and the whole project would have cost over $2.8 billion) and also because of a history of product failures and cost overruns. The project was scaled back eventually to the present two unmanned airships.

Nobody, including the corporate media, has paid much attention to these two blimps, floating some 10,000 feet above I-95 outside of Washington, DC, conveniently near NSA headquarters, but now that one of the two has gone AWOL, drifting at a reported 16,000 feet over Pennsylvania, maybe people will start asking questions. One assumes that the military will have to shoot the thing down at some point if it drifts away from the continental US, lest it fall into the hands of our new enemy, the Russians.

Imagine the fun that Edward Snowden would have examining if it it were brought down by Russia.

The incredible monitoring program that the federal government has erected to spy in the American people since 9-11 is a grim thing to contemplate, but it’s nice when something truly laughable happens to the bastards, so if you happen to live in Pennsylvania, and are lucky enough to be in the path of this errant behemoth, officially called a “Joint Land Attack Cruise Missile Defense Elevated Netted Sensor System,” take a look up and have yourself a good guffaw. But smile…the cameras might still be on.