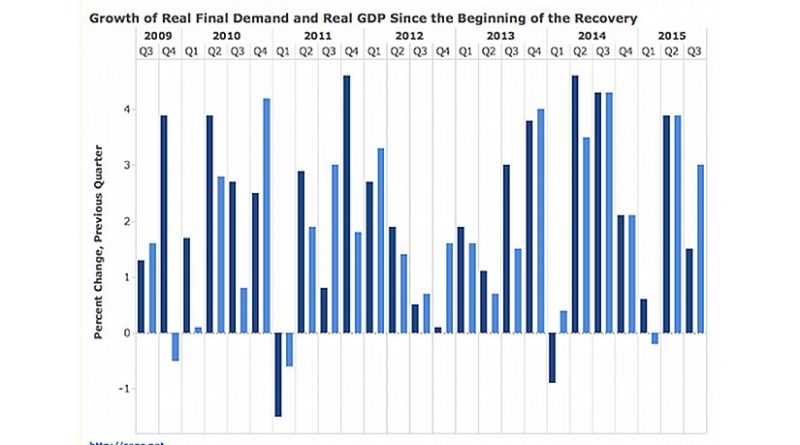 It is worth noting that inventories were still accumulating at a relatively healthy $56.8 billion annual rate in the third quarter. The negative GDP effect was due to the extraordinarily rapid $113.5 billion pace reported for the second quarter. While growth may pick up some in future quarters, inventories are not likely to be a major positive in GDP.

Consumption grew at a 3.2 percent rate in the quarter, driven by a 6.7 percent growth rate in durable goods consumption. Car buying continued to be strong in the quarter, but spending on recreational goods and vehicles were the biggest driver of the growth in durables, rising at an 10.4 percent annual rate. Health care spending continues to grow relatively modestly. Nominal spending grew at a 5.1 percent rate, while health care prices rose at just a 1.1 percent rate.

Housing grew at a modest 6.1 percent rate, down from an average of 9.8 percent in the prior three quarters. It is likely that housing will continue to boost GDP into 2016, but the growth rate is likely to be more modest in future quarters.

Exports and imports grew at almost the same rate, having little net effect on growth. This is likely somewhat of an aberration as the recent rise in the dollar — coupled with weakness in other major economies — is likely to lead to some rise in the deficit in future quarters.

There continues to be no evidence of inflationary pressures in any sector. The overall GDP price index rose at a 1.2 percent rate. It is up by 0.9 percent from its year-ago level. The core PCE grew at just a 1.3 percent rate in the quarter and is up 1.3 percent over the last year.

The underlying picture in this report is one of continuing modest growth. While there seems little basis for serious concerns about a recession, it is also difficult to find any basis for concerns about the economy overheating and an increase in inflationary pressures. With a relatively low saving rate of 4.7 percent, and durable good purchases already at high levels, consumption growth is more likely to slow than to accelerate. We have also seen healthy growth in residential construction in the last year and a half, which is likely to mean that future growth will be slower.

There is little reason to expect any major upturns in the rate of growth of investment in the immediate future. Net exports are likely to be at least a modest negative, unless the new Canadian government gets very aggressive with its stimulus plans. Government spending at all levels is likely to remain contained as there continues to be a political commitment to austerity.

Home » US Growth Falls Off Sharply In Third Quarter – Analysis