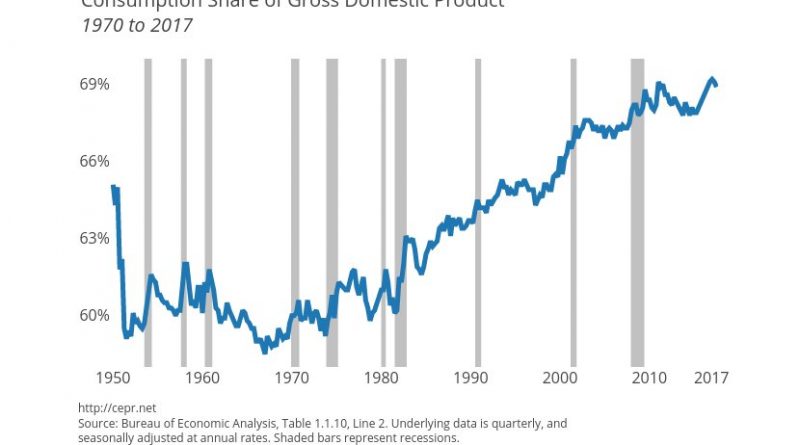 State and local investment spending fell at near or above a double-digit rate for the second consecutive quarter.

A jump in the pace of inventory accumulation raised the rate of GDP growth to 3.0 percent in the fourth quarter. Coupled with the 3.1 percent growth rate in the second quarter, these are the first back-to-back quarters over 3.0 percent since the third and fourth quarters of 2014, when the economy grew at 4.6 and 5.2 percent rates, respectively.

Consumption growth accounted for the vast majority of the increase in final demand, adding 1.62 percentage points to GDP growth for the quarter. A 14.7 percent growth in car sales was a big part of this story. This is likely due to people replacing cars destroyed by the hurricanes. Excluding cars and other durable goods, consumption growth was modest. Non-durables grew at a 2.1 percent rate and services at just a 1.5 percent rate.

The growth in consumption has outpaced income as the savings rate fell to 3.4 percent, the lowest since before the Great Recession. As a share of GDP, consumption stands at a record high. (There is a misguided view that the consumption share of GDP continually rises. This is not true historically, as there was no rise from 1950 to the mid-1970s, nor does it make sense theoretically.)

The low savings rate should raise some concerns. People are obviously spending based on their growing stock and housing wealth. If there were to be a reversal in these markets (more likely stock than housing), we would expect to see consumption fall back some. This would not likely cause a recession, since neither investment nor housing seem to be driven by high market prices at the moment, and therefore would not fall much in response to a downturn, but a dampening of consumption would certainly be a drag on growth.

Investment was weak in the quarter, growing at a 3.9 percent rate. A 5.2 percent decline in structures offset modest growth in the other two categories. Residential construction was surprisingly weak, falling at a 6.0 percent rate, its second consecutive decline. Most of this drop has been in spending on improvements and commissions and fees, such as those charged in mortgage refinancing.

Net exports added 0.41 percentage points to growth in the quarter, as a modest rise in exports was coupled with a small drop in imports. This is not likely to be repeated in future quarters. A drop in government spending was a small drag on growth as federal non-defense spending fell for the third consecutive quarter and state and local investment spending dropped at near or above a double-digit rate for the second consecutive quarter.

There continues to be no evidence of inflationary pressures in this report. The GDP price index is up 1.8 percent over the last year, while core personal consumption expenditure deflator is up by 1.3 percent. This is the same as its rate of increase in the last quarter. This means the rate of inflation remains well below the Fed’s target, with no evidence of acceleration.

One piece of potentially very positive news in this report is a rise in the rate of productivity growth. Hours worked grew at less than a 1.0 percent annual rate in the third quarter, while value-added in the non-farm business sector grew at a 3.8 percent rate. This means that productivity is likely to be over 2.0 percent for the quarter, a big jump from the 0.7 percent rate of the last five years. Quarterly data are hugely erratic, but this would still be a good sign.

On the whole, this report provides little evidence that the economy upshifted from its 2.0 percent growth rate in the recovery to date. The rise in inventory growth will not be sustained and consumption growth will likely slow in future quarters.