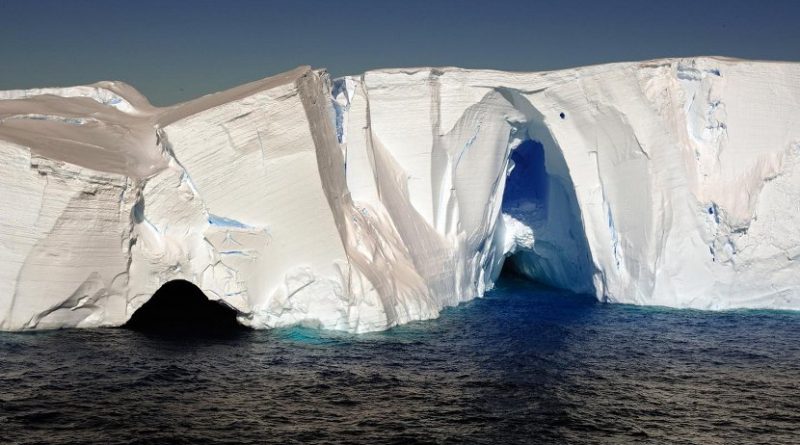 Thousands of marks on the Antarctic seafloor, caused by icebergs which broke free from glaciers more than ten thousand years ago, show how part of the Antarctic Ice Sheet retreated rapidly at the end of the last ice age as it balanced precariously on sloping ground and became unstable. Today, as the global climate continues to warm, rapid and sustained retreat may be close to happening again, and could trigger runaway ice retreat into the interior of the continent, which in turn would cause sea levels to rise even faster than currently projected.

Researchers from the University of Cambridge, the British Antarctic Survey and Stockholm University imaged the seafloor of Pine Island Bay, in West Antarctica. They found that, as seas warmed at the end of the last ice age, Pine Island Glacier retreated to a point where its grounding line – the point where it enters the ocean and starts to float – was perched precariously at the end of a slope.

Break up of a floating ‘ice shelf’ in front of the glacier left tall ice ‘cliffs’ at its edge. The height of these cliffs made them unstable, triggering the release of thousands of icebergs into Pine Island Bay, and causing the glacier to retreat rapidly until its grounding line reached a restabilising point in shallower water.

Today, as warming waters caused by climate change flow underneath the floating ice shelves in Pine Island Bay, the Antarctic Ice Sheet is once again at risk of losing mass from rapidly retreating glaciers. Significantly, if ice retreat is triggered, there are no relatively shallow points in the ice sheet bed along the course of Pine Island and Thwaites glaciers to prevent possible runaway ice retreat into the interior of West Antarctica. The results are published in the journal Nature.

“Today, the Pine Island and Thwaites glaciers are grounded in a very precarious position, and major retreat may already be happening, caused primarily by warm waters melting from below the ice shelves that jut out from each glacier into the sea,” said Matthew Wise of Cambridge’s Scott Polar Research Institute, and the study’s first author. “If we remove these buttressing ice shelves, unstable ice thicknesses would cause the grounded West Antarctic Ice Sheet to retreat rapidly again in the future. Since there are no potential restabilising points further upstream to stop any retreat from extending deep into the West Antarctic hinterland, this could cause sea-levels to rise faster than previously projected.”

Pine Island Glacier and the neighbouring Thwaites Glacier are responsible for nearly a third of total ice loss from the West Antarctic Ice Sheet, and this contribution has increased greatly over the past 25 years. In addition to basal melt, the two glaciers also lose ice by breaking off, or calving, icebergs into Pine Island Bay.

Today, the icebergs that break off from Pine Island and Thwaites glaciers are mostly large table-like blocks, which cause characteristic ‘comb-like’ ploughmarks as these large multi-keeled icebergs grind along the sea floor. By contrast, during the last ice age, hundreds of comparatively smaller icebergs broke free of the Antarctic Ice Sheet and drifted into Pine Island Bay. These smaller icebergs had a v-shaped structure like the keel of a ship, and left long and deep single scars in the sea floor.

High-resolution imaging techniques, used to investigate the shape and distribution of ploughmarks on the sea floor in Pine Island Bay, allowed the researchers to determine the relative size and drift direction of icebergs in the past. Their analysis showed that these smaller icebergs were released due to a process called marine ice-cliff instability (MICI). More than 12,000 years ago, Pine Island and Thwaites glaciers were grounded on top of a large wedge of sediment, and were buttressed by a floating ice shelf, making them relatively stable even though they rested below sea level.

Eventually, the floating ice shelf in front of the glaciers ‘broke up’, which caused them to retreat onto land sloping downward from the grounding lines to the interior of the ice sheet. This exposed tall ice ‘cliffs’ at their margin with an unstable height, and resulted in rapid retreat of the glaciers from marine ice cliff instability between 12,000 and 11,000 years ago. This occurred under climate conditions that were relatively similar to those of today.

“Ice-cliff collapse has been debated as a theoretical process that might cause West Antarctic Ice Sheet retreat to accelerate in the future,” said co-author Dr Robert Larter, from the British Antarctic Survey. “Our observations confirm that this process is real and that it occurred about 12,000 years ago, resulting in rapid retreat of the ice sheet into Pine Island Bay.”

Today, the two glaciers are getting ever closer to the point where they may become unstable, resulting once again in rapid ice retreat.