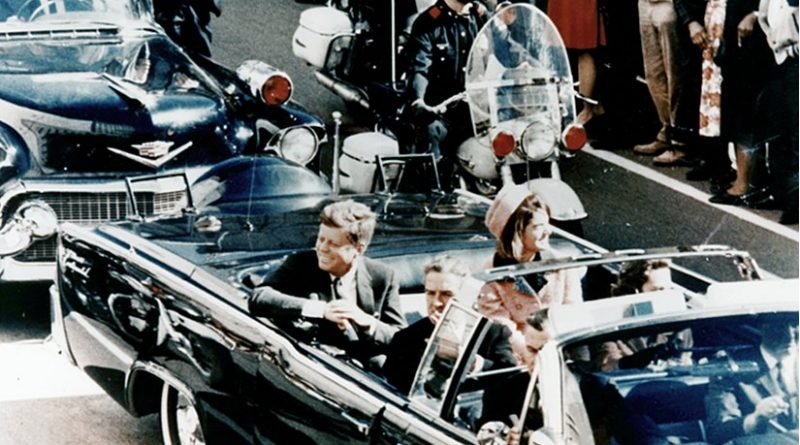 Picture of President Kennedy in the limousine in Dallas, Texas, on Main Street, minutes before the assassination. Also in the presidential limousine are Jackie Kennedy, Texas Governor John Connally, and his wife, Nellie. Photo by Walt Cisco, Dallas Morning News, Wikipedia Commons.

I’ve heard it said that “you never forget where you were when you heard that President Kennedy was shot.” I remember, but most American’s don’t because Kennedy’s assassination was 54 years ago and most Americans weren’t alive then.

Like many Americans, I am convinced that Lee Harvey Oswald, the person who shot President Kennedy, did not act alone. The convincing evidence, as I see it, is that Oswald was killed by Jack Ruby, who was convicted of the murder but died of lung cancer in prison while his case was being appealed.

There is no doubt that Ruby killed Oswald, because that killing was televised, but why did Ruby do it? Oswald was already in custody, and if he was the actual assassin, he surely would be sentenced to death. The only reason for Ruby to kill Oswald first would be to keep him from revealing his conspirators.

For Ruby to kill Oswald, two things must have been true. Ruby must have been sure Oswald was Kennedy’s assassin, and Ruby wanted to prevent Oswald from talking.

The substantial investigation after Kennedy’s assassination produced the Warren Report, which concluded that Oswald acted on his own. A lone gunman killed the president.

I see no real motive for Oswald to have done that, but I would be more ready to accept the lone gunman conclusion had Ruby not killed Oswald. The only real motive Ruby could have had was to silence Oswald.

So, my curiosity has been running now for more than half a century, and my hope was that the JFK files would shed some light on who was actually behind that terrible event. It appears, from what I’ve seen, that the material being released will shed some light on our bungling intelligence agencies, but no more light on who Oswald was working with when he pulled the trigger.

It’s a reasonable conjecture that after the extensive investigation, enough information was uncovered that somebody (probably several people) knew who Oswald’s conspirators were. Why has this information not come to light? What were the investigators hiding, and why?

These questions have been in the back of my mind for decades, and the partial release of the JFK files has brought them to the surface again.