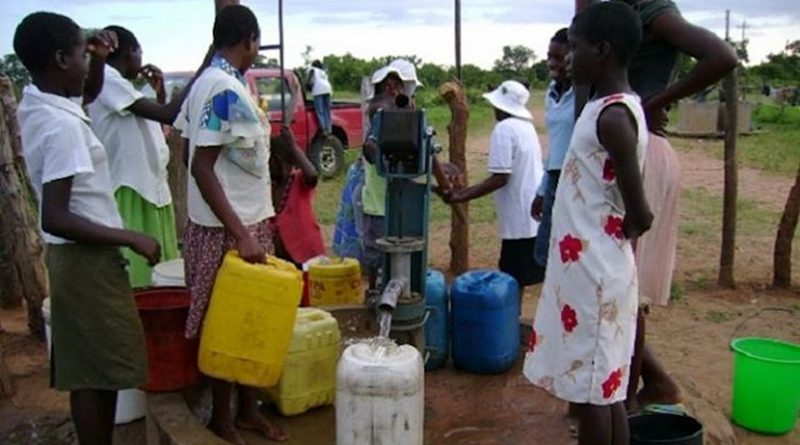 People at a borehole, one of the groundwater sources people have turned to in Zimbabwe's towns and cities as climate change impacts bite. Credit: Construction Review Online.

As the blazing heat of the sun beats down on her, 25-year-old Maria Sinorita from Chimoio, a Mozambican town lying approximately 100 km east of the country’s border with Zimbabwe, struggles to draw water from the well in her yard.

For Sinorita, even the water she is drawing from the well is running out and, because she has no option as climate change impacts hit her and many other Mozambicans, she has to dig deeper and deeper for the precious liquid.

“I can’t cope without water, and groundwater for many of us here has become the answer as we battle the effects of climate change,” Sinorita told IDN. “It seems rains are not anywhere near and I may have to keep hunting for groundwater for a little longer.”

Even in Zimbabwe’s Mwenezi district in Masvingo Province, for impoverished villagers like 37-year-old Taurai Chikwari, a mother of six in Maranda village, groundwater has become the way to go in the face of the biting consequences of climate change.

Chikwari, who with other villagers in her area, has now resorted to frequenting Mushawi river to dig in the sand for water to simmer out of the ground in the midst of climate change impacts, has had to beat water deficits with ground water.

Like Sinorita in Mozambique, Chikwari is among the millions of Southern Africans who have turned to ground water as surface water runs out.

“We can’t find water now in dams or lakes because they have largely dried up and so groundwater has become our only means to survive,” Chikwari told IDN.

According to the World Bank, as climate variability alters the amount of surface water that is available, people in the Southern African region are increasingly turning to groundwater and climate change experts agree that groundwater has become the panacea for defeating the impact of climate change.

“Dams and lakes that supply water in both towns and cities here are having very low water levels and to survive in this crisis, people are digging up wells to draw water for consumption and even for agricultural purposes and even if these, too, drop in water levels, people dig further to keep water simmering up,” Joseph Tasosa, director of the Zimbabwe National Environmental Trust, told IDN.

And it is thanks to groundwater that farming has nevertheless become a thriving business for Zimbabwean indigenous farmers like 57-year-old Garikai Chioniso based in Rutenga in Mwenezi district, the hottest and driest part of the country.

“There are often very limited rains here and dams commonly run dry and so with the wells and boreholes I have turned to, I have stayed on in my farming business. This is region five which is very hot, but I produce mouth-watering cabbages which I supply to boarding schools,” Chioniso told IDN.

The trend of depending on groundwater has spread across the Southern African region, with development experts here like Zambia’s Michael Chiluba saying that “management of critical groundwater resources is seeing our country prosper in terms of food self-sustenance despite climate change impacts that are prevalent here.”

Part of the success in increased use of groundwater can be put down to organisations like the SADC Groundwater Management Institute that have helped countries contend with climate change through the harnessing of groundwater.

The regional organisation was launched two years ago in South Africa as a mechanism for implementing the Sustainable Groundwater Management Programme in member states of the Southern Africa Development Community (SADC).

Speaking during the launch, South Africa’s Deputy Director General of the Department of Water and Sanitation, Deborah Mochotlhi, said the institute would play a major role in bringing groundwater, a hidden resource, into to the limelight in the region’s development efforts.

“Groundwater issues have historically not been granted priority in projects and have been seen as ‘second best’,” she said. “That is slowly changing and initiatives like this will further change that perception.”

At the time, Mochotlhi stressed that Southern Africa is “a challenged region in terms of water resources with increasing demand, climate change and pollution placing mounting pressure on the region. There is no better time than now to see this initiative launched as we face drought conditions across nine South African provinces, and many countries in our region.”

In Namibia, as the demand for groundwater rises in the face of worsening climate change, an 18-month study funded by the World Bank and managed by the United Nations Office for Project Services (UNOPS) on behalf of SADC, under its Groundwater and Drought Management Programme (GDMP), has been carried out.

For agricultural experts like Kgomotso Maphile based in Windhoek, the Namibian capital, groundwater in this desert Southern African nation has the potential to change lives for the better.

“Already many here are utilising groundwater which, if sustainably used, can result in improvements in human welfare in the country because with groundwater, people here have managed to go along with their projects requiring constant water supplies,” Maphile told IDN.

According to Maphile, “about one-third of the people in Southern Africa live in drought-prone areas … In the driest part of the region, groundwater is the primary source of drinking water for the people and livestock, irrigation for agriculture, and water supply to industry.”

In South Africa in recent years, the authorities there have also been turning to groundwater as pressure on surface water increase. The country’s Department of Water and Sanitation has invested heavily in state-of-the-art groundwater infrastructure and has transferred essential knowledge, as well as resources to municipalities to ensure their sustainability.

Use of groundwater is not, however, a new phenomenon. Over the years, it has been used in Namibia, for example, for urban water supply, mining and rural water supply but, even as surface water bodies are fast running dry across Southern Africa, officials in the region fear that the underground water they have turned to may also run out..

In Zambia, faced with longer droughts and growing water demand, the government had to introduce fees on groundwater use earlier this year. Under a new executive order that came into effect in March, owners of domestic boreholes are now required to pay a one-off fee of 250 kwacha (25 dollars) to have their well licensed.

In May, Emmanuel Mumba, a legal counselor at Zambia’s government-run Water Resource Management Authority (WARMA), said that “we are going to be monitoring groundwater use now, because as long as it is not managed well we will run out of it.”