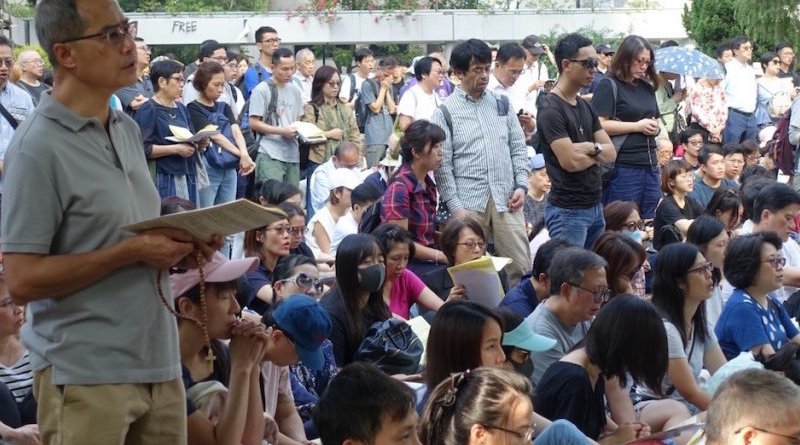 Some of the Hong Kong Catholics attending the prayer service. (UCA News photo)

Hundreds of Hong Kong Catholics joined a prayer service as the city experienced its 21st week of mass protests that began in opposition to a now-withdrawn extradition bill.

About a thousand Catholics prayed the rosary for the city at the event in central Charter Garden organized by the Justice and Peace Commission of Hong Kong on Oct. 26.

Auxiliary Bishop Joseph Ha Chi-shing of Hong Kong told those attending that the Church condemns all kinds of violence.

“Our reciting the rosary represents our non-violent resistance [to tyranny],” Bishop Ha said.

The Franciscan bishop said that Catholics do not demonize people.

“No one is a ‘cockroach’. No one is a ‘dog’, and no one is a ‘yellow object’ either. We’re all the sons and daughters of God. We are all brothers and sisters,” he said.

The protests started in June as a backlash against a now-scrapped piece of legislation that would have allowed criminal defendants to be transferred from Hong Kong’s independent legal system to mainland China.

But anger over economic inequality in the territory, concern over perceived dissipating freedoms and shock over police use of force have mounted.

Bishop Ha called on the authorities not to inflame the situation in the Asian financial hub.

“The one who has public power should bear more responsibilities,” he said.

Bishop Ha spoke of a survey by a local media that found more than 70 percent of Hong Kong citizens want an independent investigation into the actions of the police force which is also one the protestors’ five demands.

Attending the prayer service was 18-year-old Gabriel Mou who told UCA News praying the rosary helps him come to terms with what is occurring in the city.

“Sometimes we feel hopeless and don’t know what to do, but as a Christian we can pray,” Mou said.

He hopes the government soon accepts the demands from the majority of Hong Kong’s people which also includes the release and exoneration of arrested protesters and the implementation of universal suffrage.

Lina Chan, executive secretary of the Justice and Peace Commission, said the prayer meeting was part of the local Church’s efforts to pray the rosary daily during October and to celebrate the Extraordinary Missionary Month as requested by Pope Francis.

“We want to the public to know that the Church cares about the current situation,” she said.