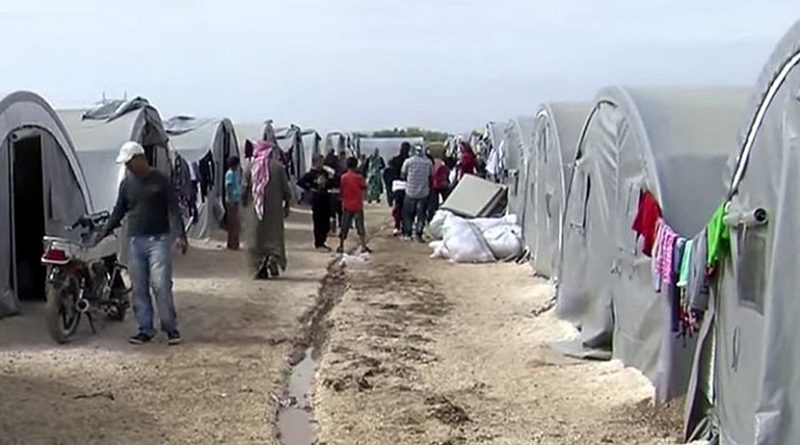 In the spring of 2011 when Syrians first took to the streets to demonstrate their grievances against the rule of Syrian President Bashar al-Assad, the secular opposition in Turkey had just turned to infighting and Erdogan’s ruling AK Party was riding a wave of populism that seemed unstoppable. Be that as it may, when Syrian refugees arrived in the thousands on Turkish soil, President Erdogan’s domestic plans were disturbed.

Slowly but surely, as the number of Syrian refugees in Turkey increased, by the hundreds of thousands, Ankara was being drawn into the affairs of Damascus. By the time the number of Syrian refugees eclipsed a million in 2014, Erdogan’s attitude towards Assad changed dramatically. The Turkish government began arming, funding, and training opposition forces doing battle against the Assad government.

Soon enough, Turkey became a haven for the Syrian opposition as well as a conduit for where foreign militants made their way into Syria. When the militant forces gained a foothold in Syria and Iraq, the flow of refugees inflated. Millions of Syrians fled to Turkey and the state was forced to construct camps that hosted new arrivals.

Turkey does not necessarily get the credit it deserved when it comes to Syrian refugees, but the country has taken in more refugees than any other nation. Erdogan convinced the Turkish public that accepting refugees was an act of compassion, morality, and solidarity. The narrative work and political opposition to the influx of refugees remained mute, but since day one, there was an inescapable truth to this equation; Turkey could not host Syrian refugees indefinitely.

The 2014 presidential election was a rude awakening for President Erdogan. He managed to win 51% of the vote, which was enough to get re-elected, but Erdogan lost the confidence of voters from the southeast of Turkey which was predominantly Kurdish. The pro-Kurdish HDP and its chairman Demirtas had chipped away at Erdogan’s popular vote.

A year later, Erdogan’s AK Party lost a majority in parliament for the first time in over a decade. This blow was brought about by the success of the HDP which continued to win over Kurdish votes. Being a man of shrewd politics, Erdogan changed his strategy. While earlier he led genuine peace talks to reconcile with the PKK separatists in order to appease Kurdish voters, which came close to a peace deal after the HDP blowback however, Erdogan struck an alliance with Turkish nationalists to secure a majority rule.

The nationalist faction MHP only had one policy; they strongly opposed reconciliation with the PKK. As Erdogan capitulated to the nationalist demand, years of talks with the PKK came to an end. The president’s policy of accommodation and reconciliation made a U-turn and went anti-Kurdish. Thus, the rise of the HDP was probably the worst thing that could have happened to the needs of the Kurdish voters.

Subsequently, Turkey’s objective in Syria shifted according to the alliance with the MHP. Instead of regime change in Damascus, priority was given to deny the YPG (which had links to the PKK) from establishing an autonomous state in northeast Syria.

Erdogan, who was in partnership with Turkish nationalists, shifted insurgents from Aleppo, Hama, Homs, and Idlib in northwest Syria to attack the YPG in the northeast. Instead, in 2016, when the Syrian Arab Army retook the city of Aleppo and other major cities, Erdogan had redirected the Syrian rebel forces to the YPG frontlines. It was a striking change in policy so much so that by 2017, Erdogan was back to working with Damascus, Russia, as well as Iran to create a new balance of power in Syria, one that excluded the YPG.

Erdogan’s Syria policy was not the only thing that changed according to the political landscape. In the 2019 municipal elections, the AK Party lost control in nearly all major cities across Turkey including Istanbul. Two decades ago, President Erdogan was the mayor of Istanbul, but now he cannot even muster the popular vote over the city he once governed.

The 2019 municipal election was quite a significant blow to Erdogan and perhaps the weakest point in his political profession in over two decades. Part of the failure was rooted in the leader’s currency crisis which was brought on by bad loans. The other part was due to the growing discontent from the Turkish public with the presence of 3.6 million Syrian refugees on Turkish soil. Turkey’s open border policy towards Syrian refugees was always meant to be a temporary resolution. The currency crisis however had depleted the public’s patience and Erdogan being the politician he is, had to act accordingly.

Much like his U-turn on Kurdish policy, Erdogan’s agenda shifted. The Turkish president no longer portrays himself as a patron of the pious, but as a nationalist who wants the Syrian refugees to go back to their broken homes. The trouble with this is that refugees have inalienable rights according to international law where one cannot merely resettle millions of refugees back into a war zone.

The Turkish solution to the conundrum is to carve out a large enough buffer zone along Syria’s border with Turkey. The envisioned safe zone would sit east of the Euphrates River and measure at a length of 370 kilometers and a depth of 32 kilometers, an area large enough to host around 2 million refugees and rid Erdogan of a political liability that are the Syrian refugees.

The Turkish plan also includes the reconstruction of 200,000 homes as well as institutions for security, health care, education, religion, and recreation. All of this would be internationally funded, but the construction projects would be licensed by Turkish firms. The plan basically kills two birds with one stone given that this may settle the refugee question while reanimating the economy. The ruling party in Ankara also hopes that this will win back the popular vote.

In a Turkey that is cash-strapped and where ant-Arab sentiment is rising, the government feels pressure to illustrate to its public that it is not prioritizing foreign refugees over its own citizens. Thus, despite all the flaws, including the lack of funding, Erdogan is pushing the agenda regardless.

The irony is that Washington and Brussels are now criticizing Ankara’s harsh attitude towards Syrian refugees while they themselves have essentially locked their borders. Erdogan, who is increasingly isolated from his own allies has been left to deal with the brunt of the refugee dilemma on his own. In response, the Turkish president stated that he would ignite a new refugee crisis in Europe if no aid is given to Turkey. The tense political standoff illustrates just how far Ankara’s relations with the west have depreciated.

All in all, Turkey’s endgame in Syria has shifted over the years according to the domestic political needs of the government in Ankara. From bolstering religious credentials at home and the overthrow of Assad to denying the YPG an autonomous state and the resettling of Syrian refugees, the Turkish involvement in Syria is a textbook case of how war and politics complement one another.

Home » How Do War And Politics Complement One Another In Turkey’s Syria Dilemma? – Analysis