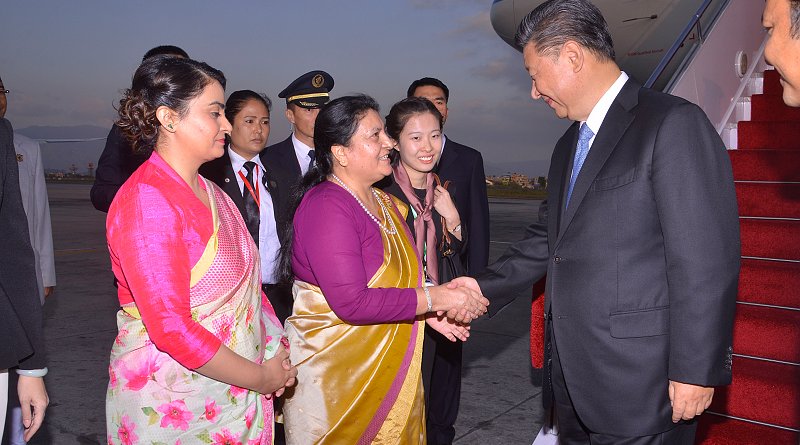 Xi Jinping, President of China visited Nepal on his way back from Mamallapuram for two days from 12th October.

Prime Minister Oli in his twitter message described the visit as “immensely successful”. On the other hand, the Chinese side would have been disappointed that they could not get Nepal sign the extradition treaty on which they were very keen.

During Xi Jinping’s visit over 20 agreements and memorandum of understandings were signed that covered a whole gamut of issues with a focus on connectivity on ports, roads, railways, aviation, communication under a new term “overarching framework of “Trans Himalayan Multi-dimensional Connectivity Network”.  The key words in most of the projects though not mentioned was “strategic connectivity”.

The agreements also included the Kathmandu-Kerung Railway project and a commitment to Kathmandu- Pokhara-Lumbini Railway project, reconstruction of Arniko Highway, roads leading to Kerung from Syburbesi and Tatopani leading to Khasa on the two frequently used border points.  Three economic corridors aligned with the three major River systems of Nepal- the Karnali, Gandaki and the Kosi were also considered. Significantly, the Nepalese side sought Chinese help in a construction project on the Kimathanka( the lowest part of the Himalayan Chain on the Nepal Tibet border ) Leguwaghat section of the Kosi Highway.

Nepal got a clearance for another consulate in Chengdu.

The joint statement issued at the end of the visit featured Nepal’s commitment to one China Policy, Tibetan issue as one of China’s internal affairs and  reiteration of Nepal’s commitment not to allow any anti-Chinese activities in its soil ( meaning to continue the drive against the Tibetans- a few Tibetans were taken into custody during the visit)

The surprise element in the Joint statement was the use of the phrase “strategic partnership’ for the first time.

The first paragrap in the joint statement said, “Both sides decided to … elevate Nepal China Comprehensive Partnership of Cooperation… to Strategic partnership of cooperation featuring everlasting friendship for development and Prosperity.”

While the Special Treaty with India has been there from the beginning, it is not clear what made the Chinese look for a strategic partnership now with Nepal.  It looks that recent claims made by US that Nepal is part of Indo-Pacific Strategy may have forced China’s hand to push for a strategic partnership with Nepal for the first time. The joint statement begins with the phrase that both sides would take the Belt and Road initiative seriously, another strategic tool devised by China.

China is also to provide training opportunities to 100 Nepal Law Enforcement Officers each year- (quite a large number). Having seen these officers in dealing with crowds in the agitations in Terai, China should be the last place to go for the “Trigger happy” Policemen” who will only be refining their skills in killing innocent protestors.  I recall an incident in Birgunj, where an innocent civilian was shot in head by the Policemen when he was relaxing in the balcony while the “Madhesi agitation for Constitutional reforms was going on in the streets far away!

Xi’s promise to Nepal that China will transform Nepal from a “land locked” to “Land linked” country must have been well received by Nepal after having experienced the unfortunate blockade from the south.  A generous offer of 56 billion Rupees as assistance to Nepal for year 2020- 2022 was also enthusiastically received.

But what must have disappointed and infuriated the Chinese was Nepal’s refusal to sign an extradition treaty which initially was in the agenda during the visit.

In June last year during Oli’s visit to China both sides agreed to negotiate a Treaty for Mutual legal assistance in criminal matters and more importantly a treaty on extradition “in order to strengthen cooperation on the administration of the border area and combat illegal border crossings and transnational crimes.

The latter portion of the agreement was mainly to control the ingress of Tibetans who cross over to go to India and the Chinese side were very keen to get the treaty signed. A Chinese team had come soon after and there were many visits and discussions on this subject.  Yet in view of internal opposition within Nepalese establishment, Oli’s Government could not go ahead with the treaty and this may have infuriated the Chinese. In the end, only a treaty relating to mutual legal assistance was signed.

Incidentally, a revised extradition treaty between India and Nepal has been pending for a long time despite talks that were abandoned between the two sides in 2008 and 2010.

There are hardly 20,000 Tibetans in Nepal of whom 9000 of them are in Kathmandu.  They are known to be leading a peaceful life and China’s aim to have an extradition treaty is only to control the Tibetans living Nepal and those passing through.  The treaty if signed would only result in the harassment of Tibetans in Nepal. This is well understood by many of the leaders in Nepal.

From the Indian point of view Xi Jinping’s visit should be seen as part of the larger Chinese effort to outreach India’s neighbours strategically.  This aspect should be one of concern to India. While India cannot match the Chinese largesse, what needs to be seen is that those projects under BRI do not have an  adverse impact on Indian security interests.