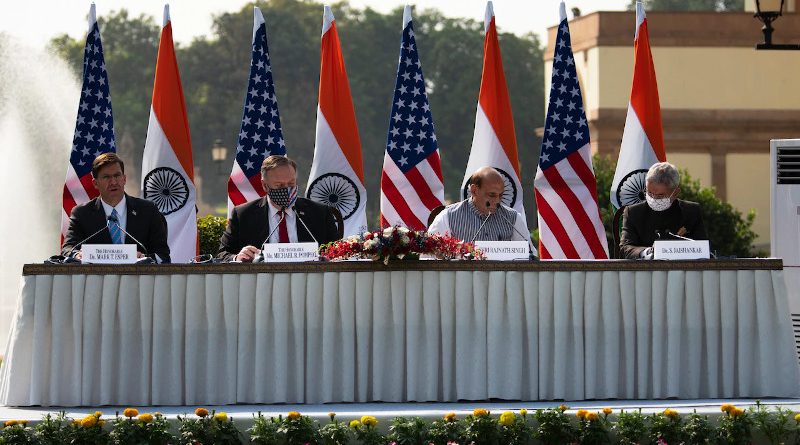 The U.S. and India Two-plus-Two Conference among the defense and foreign affairs leaders of both nations has charted just how far cooperation between the two democracies has come, said a senior defense official speaking on background.

“The two-plus-two this year was an opportunity to reflect on what we’ve done, assess the current situation where more work is needed and then identify key deliverables in 2021 to advance the relationship,” said the official after the meeting.

It was the third meeting at this level between the two nations.

Prior to the meeting — held at the Hyderabad House in New Delhi — Esper and Singh sat down to substantive discussions in the Indian Ministry of Defense. Esper and Pompeo also spoke with Prime Minister Narendra Modi.

The centerpiece meeting covered a number of areas in the defense relationship. In military-to-military cooperation, the men discussed how to “operationalize” the logistics agreement. They also talked about assigning liaison officers to both countries, in areas that would deepen cooperation.

The U.S. Central Command and U.S. Indo-Pacific Command were two areas in the U.S. military discussed.

Another discussion point was information sharing and secure communications. “We spent a good bit of time talking about the Basic Exchange Cooperation Agreement, which was a key milestone today. It was signed today,” the official said. “They also identified areas in 2021, where we’d like to further information sharing at the service level and at the joint level.”

Secure communications was part of this discussion and both nations want to further the process and deepen the capability across services and at the leadership level.

Another part of the discussion centered on new areas of cooperation both in the region and in the new military domains of cyber and space, the official said.

The official was quick to say that although the relationship is deepening, it is not an alliance. “India has a policy of strategic autonomy, which we honor,” he said. “That means they want to preserve their independence and how they manage their foreign policy.”

Still, India is part of a group called the Quad countries — India, Japan, Australia and the United States. There have been a number of meetings among defense officials from these nations, the most recent being in Tokyo earlier this year. “These meetings reflect a growing acknowledgment of shared interests,” he said. They cover security, but they also cover economic and — in the time of COVID-19 – medical interests.

“There is no discussion of [the Quad] becoming an alliance anytime in the near future,” the official said. “It is really a … mechanism to organize lines of effort across … some of the largest players in the Indo-Pacific.”

The United States will host the next two-plus-two meeting.