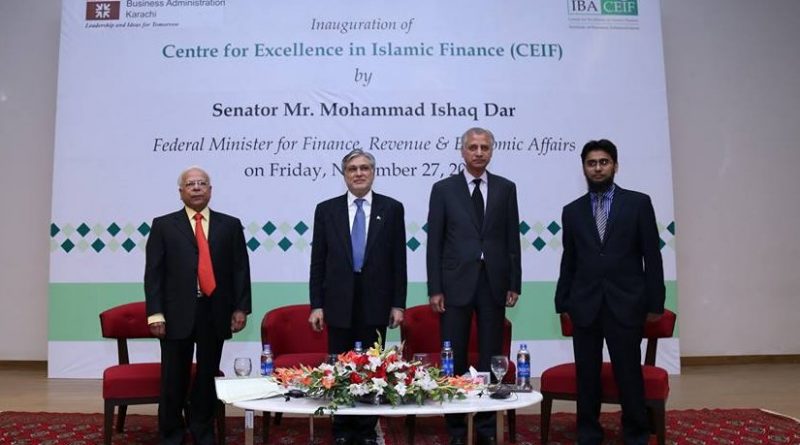 The Centre for Excellence in Islamic Finance (CEIF) at IBA City Campus was formally inaugurated by Senator Mohammad Ishaq Dar on November 27, 2015. Also, present at the occasion were Ashraf Wathra Governor State Bank of Pakistan and Dr. Ishrat Husain, Dean and Director IBA, who is also Chairman CEIF. Dr. Ishrat expressed the commitment that the Centre, along with providing trained human resource to the industry, will also play a pivotal role in developing shared understanding of Islamic finance principles.

Wathra expressed the hope that the Centre will come up with multi-pronged strategy to meet both long term and short term needs of the industry. Ensuring availability of specifically trained human resource to the industry is indispensible to improve the existing human resource capacity, invest in research and collaborate with other institutions for achieving excellence in this endeavor.

In his keynote address, Senator Dar commended the State Bank of Pakistan for taking this initiative of filling in the gap of human resources and expertise in Islamic finance by setting up Centres of Excellence in Islamic Finance at three most reputable institutions of Pakistan, Institute of Business Administration (IBA) at Karachi; LUMS at Lahore and IMS at Peshawar.

The Minister stressed the key focus of Islamic banks should be on building the real economy, through financing offering finances to those who are out of the existing banking system. They will also help in carrying forward the program of financial inclusion nu ushering prosperity among the masses.

Dar said Islamic Finance is estimated to have reached US$2.6 trillion and is on a growth trajectory. The government is committed to the cause of increasing Islamic finance and has taken various steps in this direction in the past two years.

Minister mentioned some of the initiatives undertaken that include establishing a Steering Committee under the leadership of Saeed Ahmed, Deputy Governor of the central bank, the recent launch of Karachi All Share Islamic Index, setting up an Islamic Finance Department at SECP, issue of Sukuk and undertaking Islamic capital market reforms.

Dar also informed that Ministry of Finance is taking steps to promote Shariah compliant financing its first choice for mobilizing funds for the construction of infrastructure projects and meeting long term financing needs of the country. He expressed the commitment to double the share of Islamic banking over the next few years.

Ahmed Ali Siddiqi, Director of CEIF while presenting his vote for thanks stated that the Centre will follow the IBA’s legacy excellence and leadership in this field in assisting all the stakeholders of the Islamic Finance Industry in achieving the ultimate goal, making Islamic banking the preferred choice.