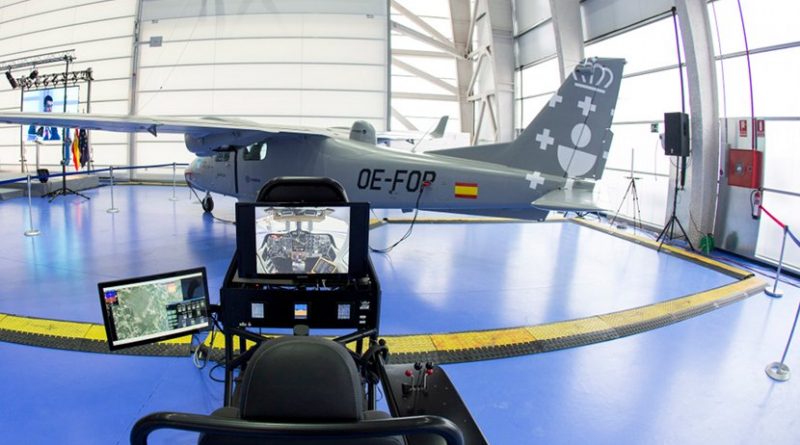 Indra said Thursday it will launch two new Research and Development projects within the Civil UAVs to boost, through the use of unmanned systems, the transformation of two completely different fields: intelligent logistics 4.0, and the training of pilots through advanced flight simulators.

Within Indra’s concept of Smart Logistic 4.0, the company will use aerial unmanned systems equipped with precision sensors and cameras as the most effective tool for the automated inspection of any type of infrastructure, from ships, aircraft and other platforms, to any infrastructure or industrial facility.

Its use will speed up the inspection of anchors, structures, antennas and sensors at heights, help detect corrosion, etc.

The collected data will feed a powerful system that will use Machine Learning, Big Data and Artificial Intelligence techniques to anticipate any incident or failure.

This will be translated into logistics cost savings of up to 20%. The operational availability of equipment and platforms will increase by up to 30%.

These are huge savings if we take into account that maintenance of an aircraft or industrial facility, throughout its life cycle, can exceed its acquisition cost several times.

The digitalization of procedures, the Internet of Things and the techniques related to Industry 4.0 are revolutionizing logistics. Any company that wants to survive in the current competitive environment will have to implement Smart Logistic services and processes. Galicia will, with the help of Indra, become a leading region for the development of drones specialized in this type of task.

The second R&D project hinges on using aerial unmanned systems to scan airports and other locations from the sky, quickly and at a low cost. The extremely precise data collected will enable the creation of maps and terrain elevations which will be used to generate the virtual environments projected by the simulators.

A large part of a pilot’s training nowadays is done through simulations. Their quality and realism have led air safety agencies recognize a flight hour on these systems as a real flight hour, for the purpose of obtaining pilot’s licenses and certificates. These same agencies require in-service pilots to complete a certain number of flight hours per year on these systems.

The use of simulators continues to grow around the world at the same pace with which air traffic and aircraft sales are increasing. Having accurate replicas of airports and other locations is a key factor for pilot training. Indra is one of the leading companies in the world in terms of simulator manufacturing, with more than 300 systems delivered in more than 30 countries.

About the Civil UAVs Initiative (CUI)

The CUI is one of the most ambitious initiatives in Europe for the development of civil drones. Its objective is to turn Galicia into a leader in the industry for this sector and promote the use of unmanned aircraft to improve the services that the State provides to the citizen.

Promoted by the Xunta de Galicia, the initiative is already expected to have funding of 157 million euros distributed in four major programs.  The first is centered on the creation and improvement of aeronautical infrastructures to ease the development of the drone industry in the region; the second is an R&D program with a €115 million investment, in which Indra and Babcok are the main industrial partners working on the development of new products, technologies and solutions; the third pillar is realized through ten pre-commercial tenders of solutions based on the use of UAVs that must be ready within two years – nine of them have already been awarded and are directed towards the improvement of rural environments and land management, maritime control and air traffic – and the last one is the business acceleration and incubation program that the Aeronautics Business Factory has recently launched and which seeks to attract and support company and startup projects from anywhere in the world.

In what has become an annual summer tragedy, wildfires are again destroying western US forests. Millions of acres and millions