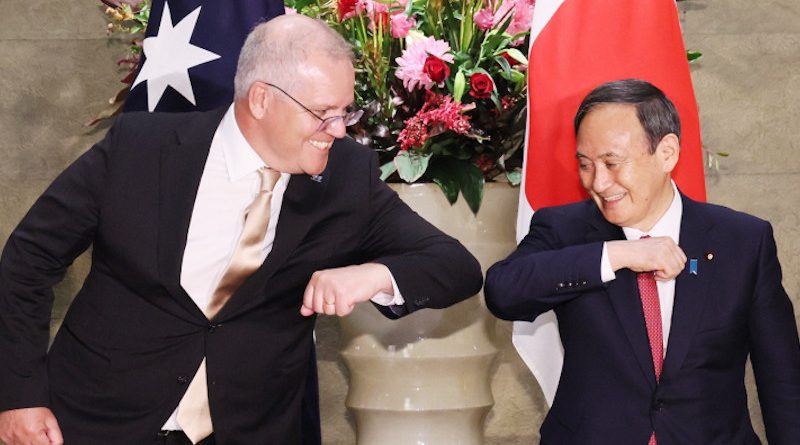 Suga surprised the region — and many in Japan — by announcing a net zero carbon emissions target in his 26 October speech to the Japanese Diet. Until the announcement, Japan’s long-term mitigation target, as per the 2016 cabinet approved Plan for Global Warming Countermeasures, was to reduce emissions by 80 per cent by 2050. Prime Minister Suga has significantly raised Japan’s emissions reduction target, and now has less time to reach it.

In the joint statement issued after the leaders’ meeting, Australia recognised Japan’s new commitment to net zero emissions. The statement notes that the two governments can potentially work together in the transition to low carbon societies.

Japan’s announcement thus suggests that demand within this key market that takes almost AU$22 billion of Australia’s energy-related exports is in long-term decline. Modelling of deep decarbonisation scenarios show that Japan will need to decarbonise its electricity sector rapidly, electrify end-use technologies and use energy more efficiently. The industrial sector will also need to decarbonise rapidly. Even if Japan does not reach its final goal by mid-century, every step in this direction represents a reduction in demand for key emissions-intensive commodities, importantly from Australia.

There is opportunity for both countries to map out what a shared post-transition future might look like. The two governments have already announced sector-specific agreements on low carbon technologies, highlighting in particular hydrogen and carbon reuse. The joint leaders’ statement flags the potential for cooperation in capture, utilisation and storage.

There is a much broader agenda that Australia and Japan could and should share in moving forward with the energy transition. Japan has more electric vehicles compared to Australia, is a technology leader in the area and is examining the effects of electric vehicles on the electricity grid. Australia has seen renewable electricity deployment soar but is managing this within a competitive electricity market, while Japan is in the process of transforming its regulated utility model for electric power. Both countries have regionalised grids that leads to capacity constraints between them.

Australian companies plan to export hydrogen vectors such as ammonia to Japanese power companies, which are looking to co-burn it in thermal coal fleets to reduce emissions. But this will not lead to an emissions gain across the supply chain unless conversion technologies based on renewable energy are used. Both countries have an interest in ensuring the rules governing trade in low carbon products such as hydrogen and vectors like ammonia properly recognise the embedded emissions.

One option is for the two governments to put in place a bilateral body to map out the energy transition, modelled on something like the German–Japanese Energy Transition Council. The bilateral council began work in 2016, drawing on government, industry and academic expertise. Since then, it has mapped out a process for developing joint strategies across a range of shared issues such as renewables integration, energy efficiency in buildings, sector coupling in transportation and long-term scenario and review mechanisms for energy transition.

Given Australia’s and Japan’s common economic and strategic interests in the Asia Pacific region, and the ample opportunities for learning from one another, a similar model could develop and build on the two countries’ shared agenda in the low-carbon energy transition.

*About the author: Llewelyn Hughes is Associate Dean for Research at the College of Asia and the Pacific and an Associate Professor in the Crawford School of Public Policy at the Australian National University.