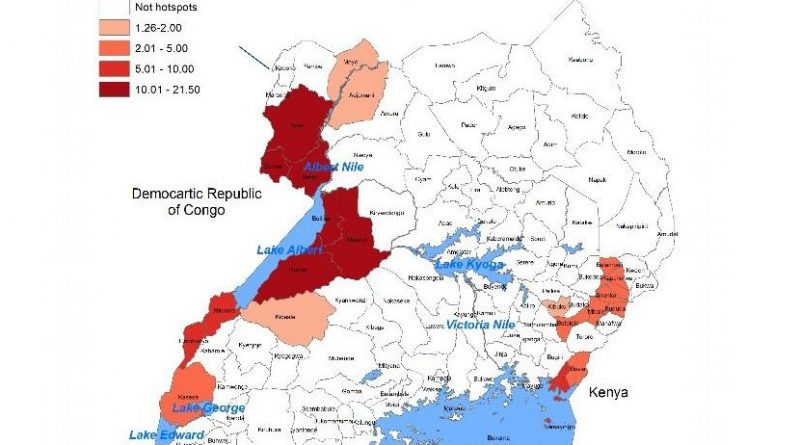 Uganda is among the countries is sub-Saharan Africa where cholera remains a recurring problem, despite advances in science and technology for prevention, detection and treatment of the infectious disease. Now, researchers reporting in PLOS Neglected Tropical Diseases have identified cholera hotspots around Uganda to help target interventions.

Cholera, caused by ingestion of food or water contaminated with the bacterium Vibrio cholerae O1 or O139, is estimated to infect up to 4 million people a year worldwide, and lead to tens of thousands of deaths. In sub-Saharan Africa, the fatality rate is more than 2 percent. Epidemics have occurred in Uganda regularly since 1971 and a number of preventive and control measures are currently in place.

In the new work, Mohammad Ali, of the Johns Hopkins Bloomberg School of Public Health, and colleagues studied district level cholera outbreak data collected by Uganda’s Ministry of Health and spanning 2011 through 2016. In addition, existing datasets on population, rainfall, water, sanitation, and hygiene were used. The group identified cholera hotspots as districts whose center fell within a significantly high risk cluster of cases or where a cluster was completely superimposed onto a district.

The group identified 22 districts at high risk of cholera–out of 112 districts total which reported cholera outbreaks during the study period. 13 of the districts were near the border of the Democratic Republic of Congo (DRC), and 9 were near a border of Kenya. The risk of having cholera in these hotspots ranged from 2 to 22 times higher than elsewhere in the country. A short distance to the DRC or Kenya border, proximity to internationally shared lakes and river Nile, and higher annual rainfall in a district were all associated with the risk of having cholera in the district.

“The findings of our study could be used as a guide to strengthen the cholera control program in Uganda,” the researchers say. “Since a majority of the hotspot districts are near the DRC or Kenya border, it suggests that close collaboration with these countries would be an effective strategy for controlling cholera in that part of the world.”