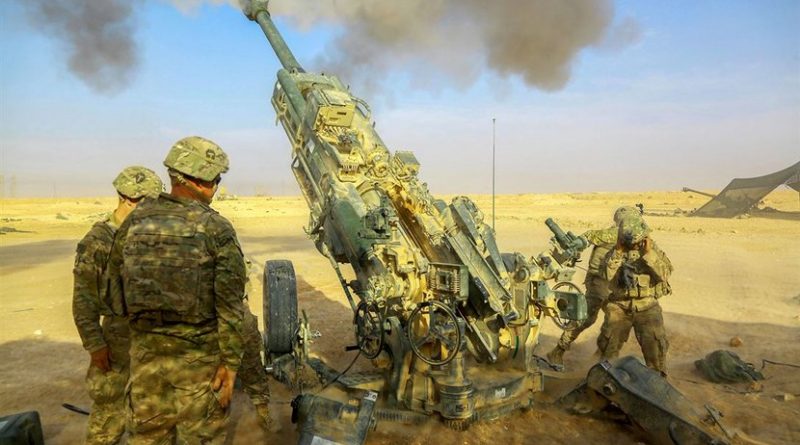 The coalition’s efforts against the Islamic State of Iraq and Syria have been successful, but there is still much to do to eradicate the group, British army Maj. Gen. Felix Gedney told Pentagon reporters.

Gedney is based in Baghdad and is the deputy commander for strategy and support at Combined Joint Task Force Operation Inherent Resolve.

Gedney spoke via video conference and described progress made against ISIS this year, and what 2018 looks like.

In Syria, ISIS remains a threat, he said. Syrian Democratic Forces have isolated the remaining pockets of ISIS militants along the east bank of the Euphrates River and are methodically clearing areas to the east, in the Syrian desert along the border with Iraq, he said.

“The SDF, with coalition strike support, repelled ISIS attacks in the vicinity of Abu Hammam, with more than a dozen enemy killed,” Gedney said. “In total, coalition forces have conducted 23 strikes against ISIS targets in eastern Syria during the past week, destroying ISIS vehicles, weapons, explosives and a command-and-control center.”

ISIS has morphed back to its roots as a terror operation, Gedney said. They retain the ability to strike targets. They are operating more against the regime of Bashir al-Assad. “The Syrian regime has failed to demonstrate its ability to prevent the resurgence of ISIS on their own soil,” he said.

The defeat-ISIS coalition is working long range to ensure the group dies, the general said. That requires a commitment to security and stability in liberated areas. “In Raqqa, for example, the SDF and the Raqqa internal security forces are conducting an important and dangerous mission: They’re bravely searching for and removing the many improvised explosive devices and booby traps left behind by ISIS terrorists, so local residents can return to their homes and get back to their lives,” he said.

And this is happening, Gedney said, noting people are returning to their neighborhoods as they are cleared. “Such efforts to establish safety and security help pave the way for civilian-led efforts to address local needs,” he said.

Residents are rebuilding homes, clearing roads and reopening shops, Gedney said. They are working to rehabilitate schools and get children back into classrooms.

“Over 830 metric tons of humanitarian aid have been delivered to more than 40 locations around the city of Raqqa, and local councils are facilitating the delivery of aid to civilians,” the general said.

In Iraq, forces are tracking down remnants of the group in Anbar province and in Baghdad, he said.

ISIS is an adaptive, patient enemy, the general said. “We know they may attempt to work in smaller cells, and they … certainly will continue attempting their acts of terror whenever and wherever possible,” Gedney said. “However, the ISF’s ongoing clearance operations should dispel any ideas that ISIS can simply vanish into the population they once terrorized and be forgotten about.”

The coalition will continue to support Iraqi efforts against the group, Gedney said. “To that end, the coalition will continue to partner with the ISF, advising, training and equipping them in their efforts to fully eliminate ISIS as a threat to Iraq,” he said. “We will tailor our support based on Iraqi requirements, with a particular emphasis on the capabilities needed to hold and secure the liberated areas.”

Like Syrians liberated from ISIS control, the Iraqi people also are voting with the feet, Gedney said. They are returning to homes, villages and cities that ISIS once controlled. “For the first time, we have seen the number of returnees climb above the number of those still displaced: Just over 2.8 million people have returned and just under 2.8 million remain displaced,” the general said.

Yet, in Syria, the coalition is disturbed by ISIS forces operating in areas controlled by the Assad regime with impunity, Gedney said. The Russian military is also operating in the area, and that complicates counter-ISIS operations in the Middle Euphrates River Valley. “The coalition will continue to deconflict with the Russian forces,” he said.

ISIS operations in that region shows the Assad regime “is clearly either unwilling or unable” to defeat ISIS within their borders, he said.

“We’ll continue to deconflict with the Russians, but we’ve got no intention to operate in areas that are currently held by the regime,” Gedney said.