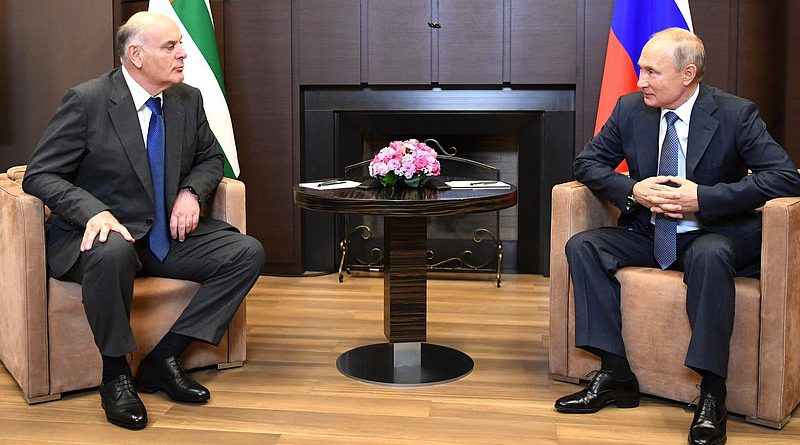 Abkhazia faces a dilemma between closer integration with Russia, which could bring an effective loss of its independence hopes, and long term internal troubles as a result of a decrepit economy and extensive corruption. Avoiding Russia would be suicidal but trying to balance it could bring some results – thence comes Sokhumi’s expressed willingness to reach a certain rapprochement with Tbilisi to alleviate economic woes.

Georgia’s Russia-controlled Abkhazia is facing deep economic crisis. Lack of reforms, extensive corruption, the pandemic-related problems of the stalled tourism sector and difficulties of extracting financial aid from its patron – Russia, create some long-term troubles for the separatist region.

This dire situation is well-understood in Abkhazia itself and it pushes the region to seek an understanding with Tbilisi, however limited it could potentially be. This sentiment is reflected in the new Abkhaz “foreign policy concept,” recently signed by the region’s de-facto leader Aslan Bzhania.

The document enshrines the ideas of “priority of national interests, active response to external challenges and threats, multilevel external contacts, [and] openness to cooperation based on equality and mutual respect.” 11 goals for foreign policy are enumerated, among which “strengthening strategic partnership with Russia” and the need to enhance “mutually beneficial relations” with other countries, including facilitation of international recognition of the region are perhaps major, but widely expected points in the document.

However, most surprising, even revolutionary, is a section of the document on the passage of a  “resolution of the Georgian-Abkhaz conflict and normalization of relations with Georgia.” While in geopolitical terms the willingness to find a certain understanding with Tbilisi is driven by Abkhazia’s long-term internal and foreign policy failures, Bzhania’s decision of potential rapprochement reverberates poorly within the Abkhaz society. A group of Abkhaz war veterans, “Aruaa,” expressed particular skepticism over the Abkhaz-Georgian conflict resolution part of the concept, in particular, the point 2.3, which seeks to set up negotiation platforms to discuss relations with Tbilisi.

To reach a limited understanding with Tbilisi will be extremely difficult amid Abkhazia’s volatile political system, though the signals for enhancing a direct dialogue with the Georgian government has been evident ever since Bzhania came to power in early 2020. He is more of a realist in foreign policy. Abkhazia faces a traditional problem peculiar to small players. Sokhumi sees long-term dangers with a close association with Russia. Too close relations could bring better economic and military support, but it is also fraught with dangers of de-facto annexation. After all, Abkhazia, in a striking difference to another Russia-controlled Georgian region of South Ossetia, has never pursued an integrationist approach with Russia.

It is this dilemma between closer cooperation with Russia and deep fear of Russian intentions that will haunt the Abkhazian political class for the foreseeable future. This was revealed in various discussion preceding and following the November 23 signing of the “formation of common social and economic space” between Sokhumi and Moscow. The program, based on the 2014 Russo-Abkhaz “Treaty of Alliance and Strategic Partnership,” envisages harmonization of the Abkhaz and Russian legislation.

Most importantly, in addition to obliging the Abkhaz side to make legislative and administrative amendments according to the Russian law in social, economic, health and political spheres, there is also a stipulation on simplification of legal procedures for the Russian investors. These stipulations are in terms of obtaining residence permit and registering work activities and harmonization of tax legislation with Russian model. As a manifestation of the rigorousness in bilateral ties, Bzhania held a series of meetings on December 11-18 with Russian authorities during his Moscow trip. It involved meetings with Moscow Government Minister and Head of the Department for Foreign Economic Activity and International Relations Sergei Cheryomin and Head of Moscow House of Compatriots Petr Gladkov; Russian Finance Minister Anton Siluanov and Head of Russian Federal Tax Service Daniil Yegorov; Russian Agriculture Minister Dmitry Patrushev; First Deputy Chief of Staff of the Russian Presidential Administration Sergey Kiriyenko and Russian Transport Minister Vitaly Savelyev; Russian Health Minister Mikhail Murashko and Deputy Head of the Russian Presidential Administration Dmitry Kozak. With Kozak Bzhania discussed the 2020-2022 Investment Program.

Ideally, this could help a decrepit Abkhazian economy, but a high pace of harmonization with Russian laws also increases chances for future merger with Russia.

In these circumstances a classical geopolitical game would require a small and dependent player to seek closer ties with other actors. Abkhazia might be doing exactly this by seeking more stable relations with Tbilisi despite fundamental differences. This is echoed in a recent interview by Sergei Shamba, currently the head of the security council of the occupied region. Shamba stated that “when there is a conflict, you need to talk” and that though Sokhumi and Tbilisi would not retreat from their respective fundamental interests, “between these extreme positions there are always questions where compromise solutions can be found.” As a token of benevolence, Shamba suggested that Sokhumi and Tbilisi “could start talking about the opening of transport communications – a railroad, air traffic.”

Despite Abkhazia’s hopes, much depends on Russia itself, which now faces a different problem: it has so far failed to produce a long-term vision for all the separatist regions it controls. Creating a unified economic space with all the separatist territories is not an option as little economic benefit is expected. Moreover, more financing has to be dedicated to the regions, whose populations could otherwise turn increasingly disenchanted with hopes they pinned on Russia. Indeed, the system is difficult to navigate for Russia since while in the first years following the collapse of the Soviet Union, Russia had to manage breakaway conflicts only in small and poor Georgia and Moldova. Moscow’s responsibilities have increased significantly by late 2020 with Donbas and now Nagorno-Karabakh conflicts now added to its strategy.

Nor can the Russian leadership entice states around the world to recognize the independence of breakaway entities. For instance, in the case of Abkhazia and South Ossetia, only Syria, Nicaragua, Venezuela, and Nauru have extended them recognition. This trend is not likely to change anytime soon. Moscow simply does not have sufficient resources – and in any case, US laws withholding financial aid from states that recognize the independence of separatist territories throughout the former Soviet space remains a major disincentive.

Nor does Russia have any long-term economic vision for the breakaway territories. Dire economic straits have inevitably caused populations to flee toward abundant medical, trade, and educational possibilities other countries provide. Usually these are territories from which the separatist forces initially tried to break away. The Kremlin has failed to transform those entities into secure and economically stable lands. Crime levels as well as high-level corruption and active black markets have been on an upward trajectory, which undermines the effectiveness of financial largesse Moscow has to provide on a regular basis.

Over the past several years, there have been hints in the media about rising discontent within the Russian political elite on how the breakaway territories are being run. Questions have been raised about how Russian money is being spent and about the increasingly predatory nature of the separatist political elites, who are focused on extracting as much economic benefit as they can from Moscow. As a result, it has become increasingly difficult for the leaders in non-recognized entities to secure Russian funding.

Therefore, Abkhazia should be discussed within a wider context, though circumstances on the ground too are important. Major rapprochement between Sokhumi and Tbilisi is highly unlikely but provided the willingness from both sides remains into 2021, certain understanding on economic re-engagement could follow, especially in the time when Russia is actively pushing for re-opening of trade routes in the South Caucasus.

This article was also published at Caucasus Watch.